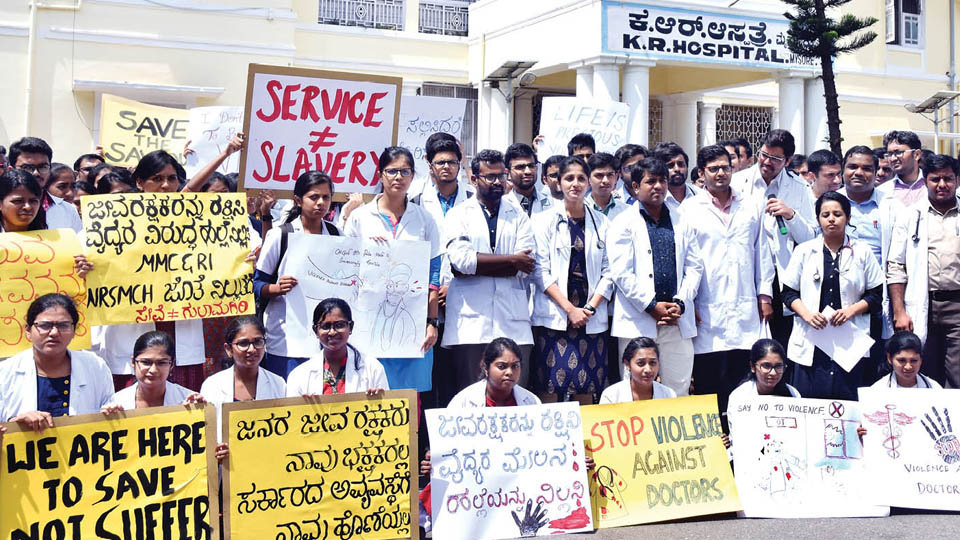 Mysore: Healthcare services across the country were hit this morning as doctors responded positively to the Indian Medical Association’s call for a nationwide doctors’ strike in solidarity with the protesting doctors in Kolkata. All non-essential services including Out Patient Department (OPD) were withdrawn from 6 am for 24 hours till 6 am tomorrow.  Only emergency and casualty services were offered.

Medical services continued to be affected in West Bengal for the seventh day today. While Trinamool Congress said that meeting in front of media personnel may not be accepted by West Bengal Chief Minister Mamata Banerjee, a tentative time of 3 pm has been fixed for the meeting. Doctors demanded a meeting with the CM in front of the media. Representatives of Students Union and Medical Colleges will attend the meeting.

In Mysuru, doctors belonging to all professional associations, dental clinics and private clinics as well as house surgeons, medical post-graduates, laboratory staff and resident doctors stayed away from work. As a result, all hospital services, except services to the emergency wing, labour rooms and intensive care units, have been affected. Barring those who have already been admitted as in-patients and emergency cases, no other cases were attended to.

Though the strike had been announced in advance, the 24-hour strike, which began at 6 am today, threw medical services in hospitals haywire as people had begun to queue up early in anticipation of OPD services which normally begin at 8 am.

The IMA’s demand that hospitals be made safe work places and that a Central Act be enacted for the protection of healthcare professionals seems to have found an echo amongst the entire medical fraternity, across public and private sector, many of whom have, on occasion, faced mob violence at hospitals. This is the first time that the entire medical fraternity across the country is coming together like this to fight for a singular cause.

Services at the State-run K.R. Hospital were hit as all the junior doctors stayed away. Senior doctors were at work as the Department of Health and Family Welfare had asked all government doctors to report for work and ensure that medical services were not affected. District Health Officer Dr. Venkatesh said that all the senior government doctors are attending to all services at State-run hospitals. Only junior doctors are on strike and as such, there is a delay in service, he said.

A group of junior doctors were seen protesting in front of K.R. Hospital holding placards. They said that though they save lives and make best efforts to save a patient, they are treated like terrorists. “Day in and day out we face assault and we are manhandled by hooligans. We demand more security. Here at K.R. Hospital, anybody can walk in and assault us,” the doctors said.

They demanded that armed security personnel be deployed outside all casualty wards at government-run and private hospitals to prevent unwarranted attacks on doctors.

In private hospitals, including the reputed ones, OPD services were suspended and only emergency services were attended to. President, Indian Medical Association, Mysuru Branch Dr. Jayanth said the protest went as planned. “No hospital offered non-emergency services or made admissions. It is a 24-hour strike that will see participation of doctors from across the country.”

There were long queues outside the OPDs of several hospitals across Mysuru in the early hours of the day. Some patients said they were not aware of the strike and had been waiting for hours.