Home » Feature Articles » Down, but not out! 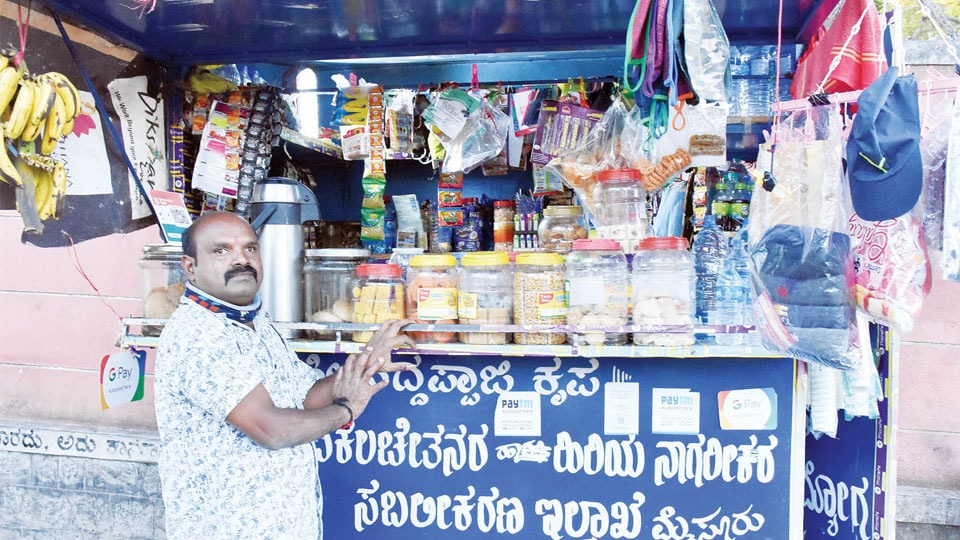 Down, but not out!

However clichéd it may sound, adversity many a time brings out the best in you. Gone are the days when a disability seemed like the end of life! Today, thanks to public awareness and empathy, many of the specially-abled make good use of the opportunities given to them, leading a life of self-respect  and self-reliance.

R. Manjunath, who runs a roadside stall behind the RTO (West) in city, is one such person. Secretary of Punaschetana Trust for the Specially-Abled, Manjunath, whose left leg is severely afflicted by polio, has not only helped himself but several other specially-abled persons win medals in different sports.

Employed as a gas delivery boy initially, Manjunath participated in a sports event for the specially-disabled in 1997 organised by the Rotary Club of Mysore in the city where he met R. Ramachandru from the Railways, who mentored  and trained him to participate in several National and International events.

“Thanks to the then Mysuru City  Corporation (MCC) Commissioner A.B. Ibrahim, who encouraged and sponsored my trip, I participated in the International Judo and Shuttlecock Tournament in Kuala Lumpur, Malaysia, in 2004. Though I got the fourth place, this event motivated me to train others in sports,” says Manjunath, who has trained several specially-disabled persons in events like javelin-throw, shot-put and discus-throw. His students also train under Ritish Guru from city in Panja Kusthi (Arm Wrestling).

Rizwan from Belagavi, Gita and Pavan from Mysuru are some of  his students who have won laurels at the International level. Pavan, who lost both his legs in a train accident, participated in several events sitting on his wheelchair.

Having won the State Award for Excellence in Sports in  the Specially-Abled category in 2017,  Manjunath is at present training 15 specially-abled persons for State and National Tournaments.

“The Government has given us facilities, but  many specially-disabled persons like me depend on roadside shops to run business and earn a living. There are no rules in this regard and we keep getting evicted often. It would help many like me if the Government gives a clear guidelines in this regard,” says Manjunath.