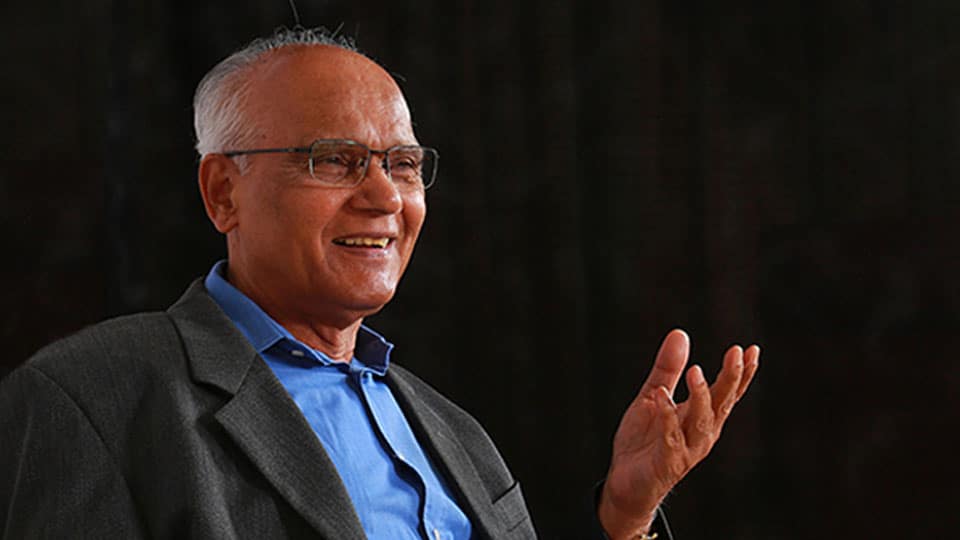 Mysuru: Noted Novelist and Saraswathi Samman awardee Dr. S.L. Bhyrappa has expressed happiness over the State Government’s invitation to him for Nada Habba Dasara inauguration atop Chamundi Hill on Sept. 29, 2019.

Speaking to press persons at his residence here on Wednesday after the State Government decided to invite him for inaugurating the 10-day Dasara festival, Dr. Bhyrappa thanked the  Government for choosing him for the honour and said he first witnessed Dasara in 1948-49 when Mysore Palace and the Maharaja were the major attractions.

He noted that Dasara has given a boost to the tourism sector as scores of tourists visit the city during the grand event.

Referring to floods across the State, Dr. Bhyrappa recalled that when Kodagu was devastated by floods last year, he had written to the then Chief Minister urging him to demand funds from Tamil Nadu which always insisted for more than its due share of Cauvery water. But the then CM neither responded nor considered his suggestion.

Asserting that even now he urges the State Government to ask TN, which demands Cauvery water even during drought, to lend its support, the novelist maintained that it will help in the future if we demand now.

Observing that no one can stop nature’s fury, he said that reconstruction is the best thing that we can do when nature plays havoc.

Replying to a question, Dr. Bhyrappa said that two top Union Ministers have made an inspection of flood-hit areas and the State Government on its part too is doing its best for tackling floods under the present circumstances.

READ ALSO  All works must be completed before Dasara-2019: GTD

It may be mentioned here that Mysuru-Kodagu MP Pratap Simha has been pressing the State Government for three-four years to invite the veteran Kannada writer and scholar Dr. S.L. Bhyrappa for inaugurating the Nada Habba but his pleas were ignored. Now the MP’s wish seems to have been fulfilled with the present BSY Government opting for the Novelist to  do the honours.

Chief Minister B.S. Yediyurappa, who chaired the Dasara High Power Committee Meeting at Bengaluru on Wednesday, said that in view of the prevailing flood and drought situation, the Mysuru Dasara-2019 will be held as per tradition but without excessive expenditure.

Pointing out that the Government has decided to release Rs. 20.5 crore for the festival, Yediyurappa maintained that it would be a low-key affair.

Stating that he has directed the authorities to scale down the festival by prioritising home grown talents, the CM noted “There are many talented artistes in Karnataka and so we should not burden ourselves by inviting those from outside.”

Continuing, Yediyurappa said that Rs. 2 crore will be released for Srirangapatna Dasara.

Highlighting the measures that will be taken for further promoting Dasara tourism, the CM said that Dasara will be much publicised at Mumbai, Delhi, Kolkata and Thiruvananthapuram International Airports and steps will be taken to ensure that all stalls at Dasara Exhibition are filled up before           the inauguration.

He further said that vehicles from other States will be given a 40-day Entry Tax exemption during Dasara.

Responding to the pleas of people’s representatives from Mysuru, Yediyurappa said that Mysuru, which is called the cultural capital of the State, will be developed like the State Capital Bengaluru. He declared that he will sanction Rs. 25 crore in the first phase for development of the city.