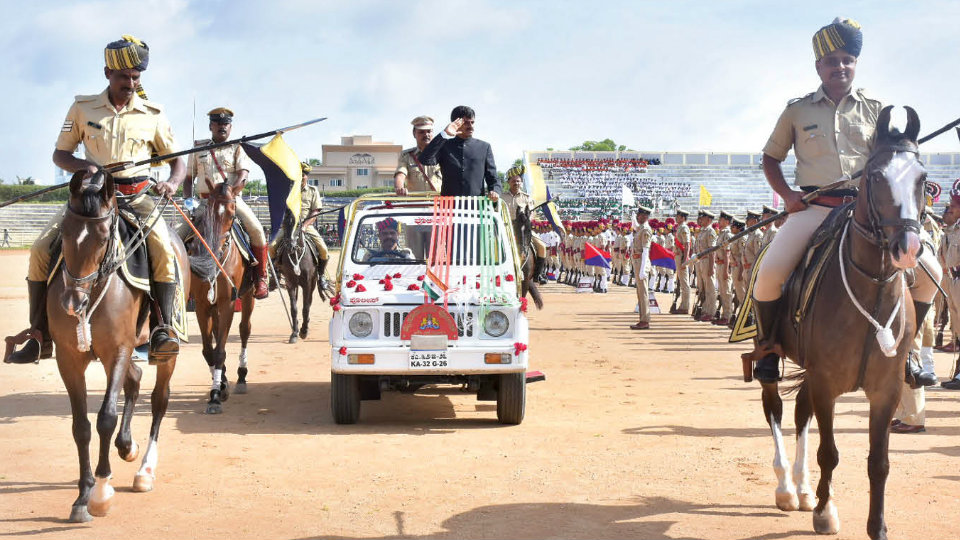 Mysuru: With no Ministers inducted into the Cabinet, Deputy Commissioners of respective Districts in the State were entrusted the responsibility of hoisting the National Tri-Colour (except for Bengaluru Urban and Rural Districts) as a part of 73rd Independence Day celebrations held yesterday.

Speaking on the occasion, he remembered the sacrifices of freedom fighters during the freedom struggle and said that every Indian must celebrate Independence Day with great pride and honour.

Expressing his gratitude to various city organisations and individuals for extending help in the flood relief works, he said that people coming forward to help in such situations was a clear display how Indians reacted for the cause of humanity with social commitment, unity and patriotism.

He also added that over the past 72 years of post Independence, the country had grown strength to strength in various fields utilising the natural resources, human resources and scientific resources available.

Later, in the evening a cultural programme was also organised at Kalamandira during which students from various educational institutions and organisations performed dance and also rendered patriotic songs.

In the school division, Police Public School stood first in the march past and was followed by Navodaya Boys School and Vidya Vardhaka in second and third place respectively. District Armed Reserve and KSRP won bagged special prizes in the Police Band division.