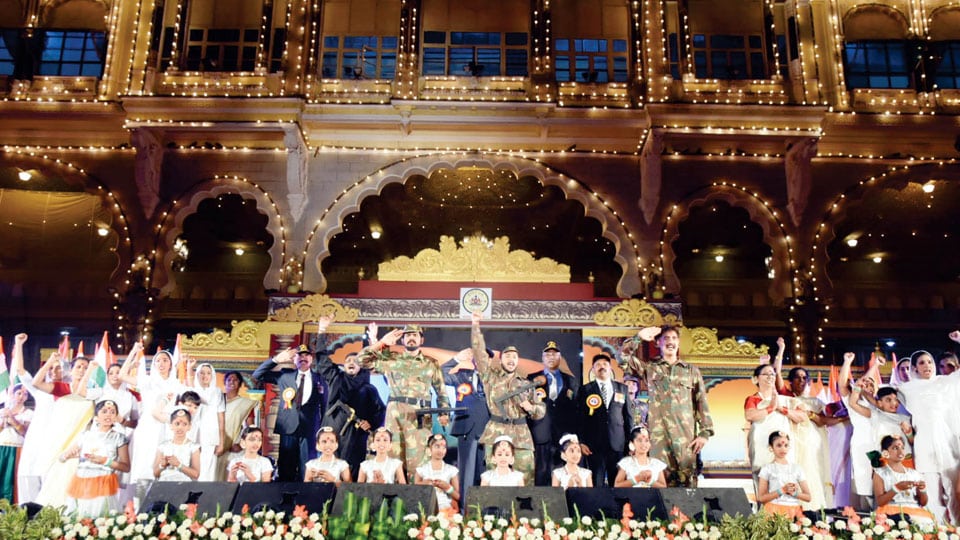 Mysore/Mysuru: The Mysore Palace Board, as part of Azadi Ka Amrit Mahotsav to celebrate 75 years of Indian Independence, had organised various cultural programmes at Mysore Palace premises on Aug. 14 evening.

Chief Minister Basavaraj Bommai, who inaugurated the event virtually,  said that the tricolour has been hoisted at 1.2 crore houses across the State.

“I have been motivated seeing the youth’s enthusiasm in one of my recent tours to Mysuru. We promise to build a powerful nation in the next 25 years through proper administration,” he added.

The cultural programmes which began from 7.30 pm was witnessed by a huge crowd.

Vidwan Sridhar Jain of ‘Apthamitra’ fame and his troupe of 80 artistes presented a dance feature titled ‘Sainika’ (Soldier) that portrayed the difficulties, hardships and challenges faced by the soldiers which earned appreciation from the crowd.

The history of freedom struggle, the sacrifices of the freedom fighters were colourfully unfolded using modern technology with a special laser show by Laser Vision.  Also, the illuminated Mysore Palace in the background mesmerised the audience.