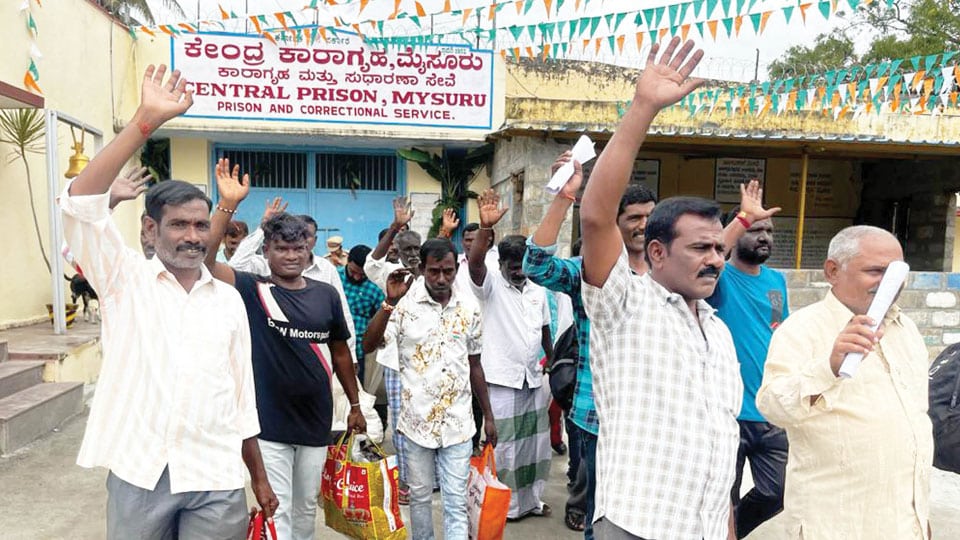 Mysore/Mysuru: On the occasion of 75 years of independence, a total of 20 prisoners who were serving short-term sentences, were set free from Mysuru Central Jail on Monday.

The prisoners were released on the basis of good conduct after a special pardon was extended as per the Government of India’s guidelines and an Order of the State Government.

Mysuru Central Jail Chief Superintendent K.C. Divyashree said that 20 convicted prisoners who were serving different jail terms, were set free on Monday as per a State Government order. Convicts will be similarly released for good conduct twice — one on the occasion of next year’s Republic Day on Jan. 26 and Independence Day on Aug.15, 2023, she said adding that the Prison Advisory Committees constituted at the Central Prison level and the State Government had examined the list of eligible prisoners.

Divyashree further said that the prisoners who walked out of jail, had been convicted in cases like rioting, theft etc., and had been sentenced to jail terms ranging from one to 10 years. The purpose behind the early release of the convicts on good behaviour is not only to reduce the number of inmates in prisons, but also to give them another chance to lead a good and lawful life, she added.

Senior Civil Judge and DLSA Member-Secretary Devaraj Bhute and other officials were present.