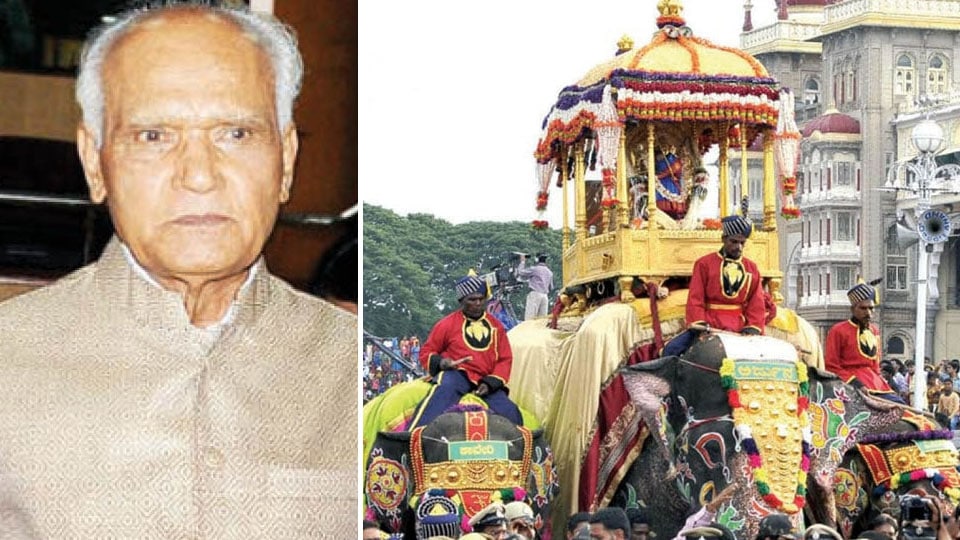 Celebrity author Dr. S.L. Bhyrappa has been chosen to inaugurate the Mysuru Dasara this time. Ever since the announcement, many memes and trolls are making the rounds on social media, attempting to ridicule the decision. Now, the question is why is it that each “group” decides that the “candidate” it thinks best should be invited to do the honour?, asks Prathibha Nandakumar in her article titled “Dasara, Bhyrappa    and Intolerance” published in Bangalore Mirror dated August 16, 2019.

One may not agree with S.L Bhyrappa’s views but that is no reason to exhibit extreme intolerance. This is a debate that is on the boil in the State in recent times.

Responding to the invitation, Bhyrappa said that he was happy to inaugurate the event. He is from Mysuru and a recipient of the Padma award, the prestigious Saraswathi Samman and Sahitya Academy Fellowship. He is also the National Research Professor and has been awarded the Nrupatunga Award and the Pampa Award by the State Government. He should have been given the honours long back. It is reported that he has seen the Dasara since 1949 but had the opportunity to witness the rituals in close quarters only twice.

Definitely a celebrity like Bhyrappa must be invited to the ceremonies. For the common people, it was not so. If you belong to old Mysore, you will know what it is to get such an opportunity that is considered an honour in itself.

People would seek to get the passes much before the preparations and would boast if they managed to receive the VIP pass.

Now, any mention of such rituals, customs and practices have come to be sneered at in recent times by some minds, who have concluded that any such thing must be condemned. Recently several Kannada dailies carried special features about the last king Jayachamaraja Wadiyar and some took it as a mission to condemn it saying “he didn’t deserve it” and that “media houses are boot-licking” and such things. When it was argued that Jayachamaraja Wadiyar was a scholar, author and musicologist of immense talent, they rubbished it all doubting if he really wrote all those 300 books. To doubt a scholar and a popular historical figure without any substantial proof or reason is a                          dangerous trend.

Similarly, to ridicule the selection of S.L. Bhyrappa is also not called for because he has the credentials to inaugurate the festival. We all grew up reading his novels, though in recent times Bhyrappa did go off the grid in making strange claims in support of even the ills of our ancient traditions. His view on feminisim was a shocker. His portrayal of Tipu Sultan as a religious fanatic, who hated Hindus in his novel Avarana, created a huge debate. The spat between Bhyrappa and Girish Karnad on Tipu is famous. Even U.R. Ananthamurthy was a critic of Bhyrappa and had questioned his ability to be an author. He had termed Avarana “dangerous.”

In recent times, there are debates about Bhyrappa turning a total Rightist. As it always happens, some extremists go all out to call him names and ban him and are now asking why he should inaugurate the Dasara. That is condemnable because no one should be excluded based on his views and personal philosophies. That actually amounts to intolerance of the worst sort. One need not agree with him but one can still have regard for him. Unless we welcome plurality, our struggle to be secular will have no meaning at all. As long as a person maintains his sensibilities not to harm other individuals in the society, one can have as heated a debate as one wishes.

2 COMMENTS ON THIS POST To “Dasara, Bhyrappa and Intolerance”