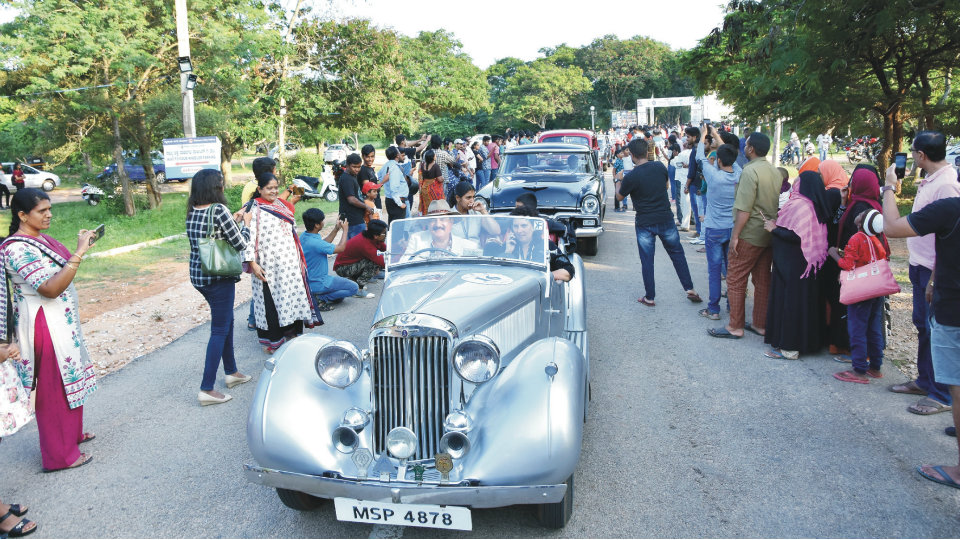 Mysuru: As many as 50 vintage cars of various companies manufactured between 1920 and 1970, are taking part in the Vintage Car Rally, organised as part of Dasara festivities.

The Vintage Car Rally has been organised by the District Administration, Tourism Department and the Federation of Historic Vehicles of India (FHVI). Mysureans will have an opportunity to see these classic cars till Oct.2.

A two-litre 1937 Sunbeam Talbot, the only car in India previously owned by Lord Mountbatten, the last Viceroy of India is being showcased. Vintage cars from the 1920s to 1980s like Sunbeam, Mercedes, MG’s, Jaguars, Fords, Dodge-Brothers, Buicks, Chevrolet’s, Morris’s, Austin’s, Alfa Romeo’s, Triumph and Lincoln are part of this Vintage Car Rally.

The convoy left Raj Bhavan yesterday and drove through the Bengaluru-Mysuru Highway, escorted by the Police before arriving at Lalitha Mahal Palace Hotel. The 125 participants in 50 vintage vehicles in the rally include members of the erstwhile royal families, business houses and industrialists.

After traversing the distance between Bengaluru and Mysuru, the cars landed at the Lalitha Mahal Palace Hotel where the rally was inaugurated by Chief Minister B.S. Yediyurappa. Tourism Minister C.T. Ravi flagged the rally off. Ravi later rode the 1937 Sunbeam Talbot.

READ ALSO  All set for Gajapayana: First batch of six elephants to arrive in city on Aug. 22

The vintage cars and motorcycles complemented the old world charm reflected in the heritage structures all along the route. After a public display at the Palace for over two hours, the rally proceeded back to Lalitha Mahal Palace.

Ravi Prakash, President, FHVI, said that the participants of the rally would drive to Chamundi Hill on Monday (today)   where they will visit Chamundeshwari Temple, before proceeding to Bandipur Wild Life Sanctuary.

On Tuesday (tomorrow), they will participate in a Pagal Gymkhana at the Lalitha Mahal Palace Grounds at noon.

Later they will drive to Krishna Raja Sagar (KRS) Dam and Brindavan Gardens and return to Lalitha Mahal Palace Hotel for a gala party. On Oct.2 (Wednesday), the rally will return to Bengaluru.