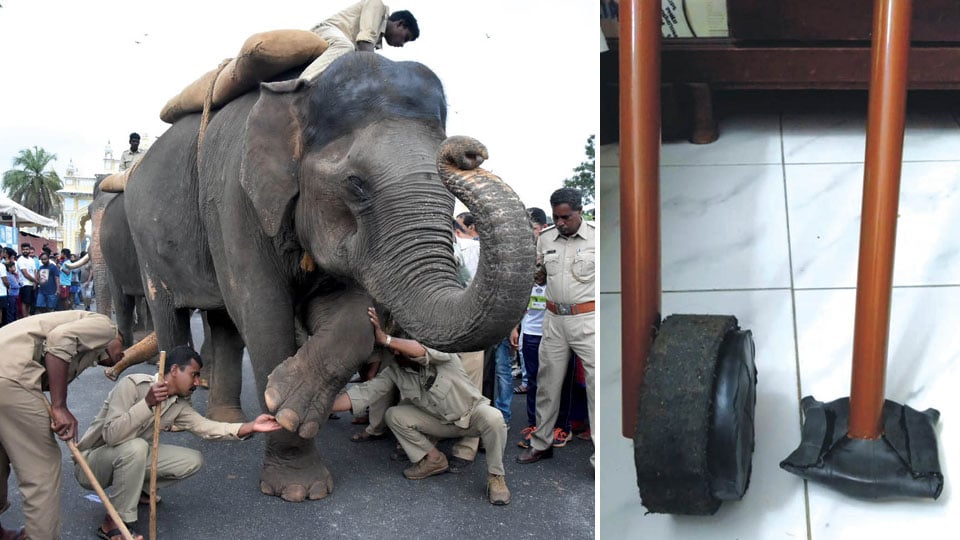 Mysuru: Two sharp nails pierced into the left foreleg of Jumbo Cauvery on Sept. 22 during the elephant team’s routine five-kilometre rehearsal from Mysore Palace to Bannimantap. The incident happened right in front of Balarama Gate of the Mysore Palace and soon after the incident went viral, it sparked outrage from animal lovers and those who firmly believe in deep-rooted Dasara tradition where elephants are an integral part.

That day, Cauvery was second in the line and suddenly stopped walking. Sensing something amiss and due to the sudden jerk, Cauvery’s Mahout asked his team members on the road to check the elephant. Other Mahouts prodded the jumbo to lift its left foreleg and found two nails pierced into the soft skin. The nails were pulled out and medication was applied. Fortunately, blood did not ooze out of the wound. After the nails were removed, the march resumed.

The nails were supposed to be picked up by the automated magnetic nail removal equipment fixed into a vehicle that moves ahead of elephants on the Jumboo Savari route. Calling the incident as unfortunate, the Forest Department clarified that the equipment is five-feet long and while it has a designated way of moving at one level, elephants do not walk straight and they tend to sway as they walk. Cauvery could have walked beyond the five feet covered by the magnetic equipment and as such, nails would have pierced it.

After the incident, the designers and makers of the magnetic trolley — Santosh and Vijaykumar of Saraswathipuram – have come up with two new equipment that can move in a wider area beyond the reach of the existing magnetic trolley. Both can be operated with hand and a Department staff or an elephant caretaker can easily operate and maintain them.

Speaking to Star of Mysore, Santosh, the trolley donor, said that he saw news in SOM where Forest Department personnel were manually picking up nails, pins etc. “After deciding to do something for the elephants, he and Vijaykumar designed a magnetic trolley. Although the trolley was made four years ago, it did not see success initially and based on the Forest Department’s suggestion, they decided to shorten the height of the trolley from 7 ft to 5.5 ft. After reduction of the height, the trolley worked wonders picking up nails, pins and other sharp-edged metallic objects,” he said.

“Now we have designed and built two more hand-held equipment that can easily be operated by anyone. These cover a wider area than the magnetic trolley and ensure that no nail or pin is missed,” he said.

Veterinarian Dr. D.N. Nagaraj said that the elephants are taken out for rehearsal every day and their foot gets smoothened. This puts them in danger as there is every possibility of nails easily piercing the legs. In this backdrop, this innovative trolley has become handy, he pointed out.

DCF Alexander said that the Forest Department takes utmost care of Dasara elephants. But unnoticed nails and other sharp objects, always pose danger he said and added that this magnetic trolley and the additional hand-held equipment are a boon for mahouts and kavadis as it attracts metallic objects from all the four directions.

In 1994, during Dasara rehearsals, the then Howdah Elephant Drona’s leg was pierced by a 2-inch nail near a rain tree in front of K.R. Hospital on the way to Bannimantap. This incident happened just 15 days before the Jumboo Savari. After two days, Drona began dragging his leg and mahout Appaji complained to officials. They then took Drona to Karanji Lake and washed its legs and there was heavy puss formation and Drona was writhing in pain.

With Dasara procession, where Drona had the responsibility of carrying the Golden Howdah, was just a fortnight away, Forest Department officials panicked as no other elephant could take Drona’s role. A team of doctors immediately cleared the puss and the nail that had pierced deep inside the foot was pulled out using cutting pliers and medication was applied.

Fortunately, the elephant was treated by a team of expert vets and got him ready to carry the Howdah. Drona too, took the incident in its stride and obeyed all instructions given to him by mahout Appaji.