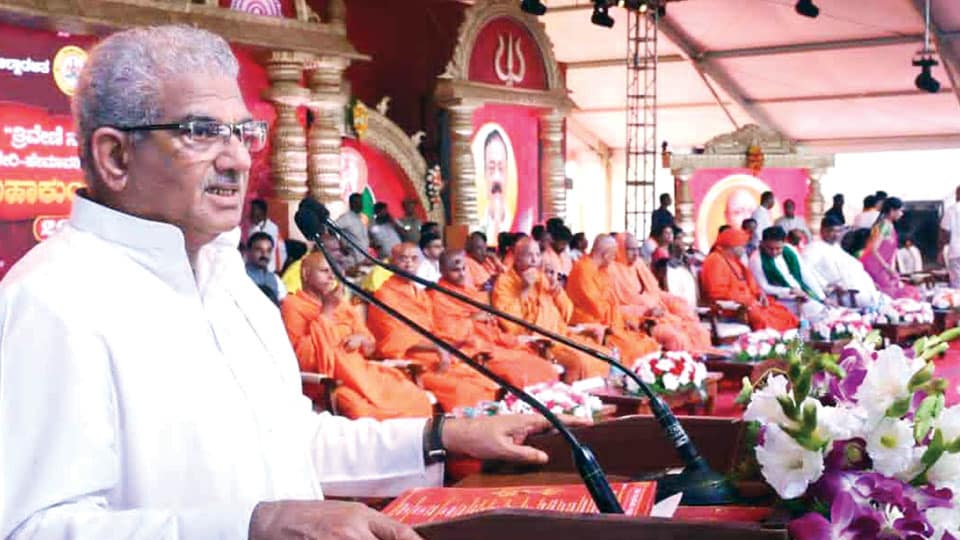 Calls upon people to conserve and worship water

Speaking on the occasion, Dr. Heggade said that water is the lifeline of everyone and as such it is essential for all to conserve it. Pointing out that we offer puja to weapons, equipment, articles and vehicles during Ayudha Puja, Dr. Heggade said that likewise water too should be worshipped as it is very much essential in our daily life and we cannot survive without it.

Noting that the Triveni Sangama here is the confluence of Cauvery-Hemavathi-Lakshmanatheertha rivers, he called upon the people to take a holy dip at the Sangama.

Minister for Silk and Youth Empowerment and Sports  and K.R. Pet MLA  K.C. Narayanagowda, who presided, said that the Maha Kumbha Mela is being held at Triveni Sangama in the presence of a number of Seers and Saints, after a gap of nine years. Underlining the significance  of ‘Punya Snana’ (holy dip) at the Sangama, he said that devotees seek the blessings of Lord Mahadeshwara at this holy shrine.

Later in the day, ‘Ganga Arati’ was performed at Triveni Sangama on the lines of the one that takes place at Varanasi in Uttar Pradesh. Priests from Varanasi performed the Ganga Arati in the presence of Seers and thousands of devotees, who had gathered to watch this unique ritual.

The rituals began as early as 6 am with the performance of Kalasha Puja followed by Ganapathi, Navagraha, Mruthyunjaya and Sahasra Modaka Homas. Later cultural programmes followed with a Saxophone performance by M.N.P. Ratnam, a Musical concert by Ravi Shivakumar and team and Karnatak Musical performance  by a K.R.Pet Musical Group.

Thereafter, a Dharmika Sabha (Religious Conference) was held at 11.30 am.

In the evening, Ganga Arati will take place at the Sangama at 6.30 pm  followed by a special Laser Show at 7 pm.