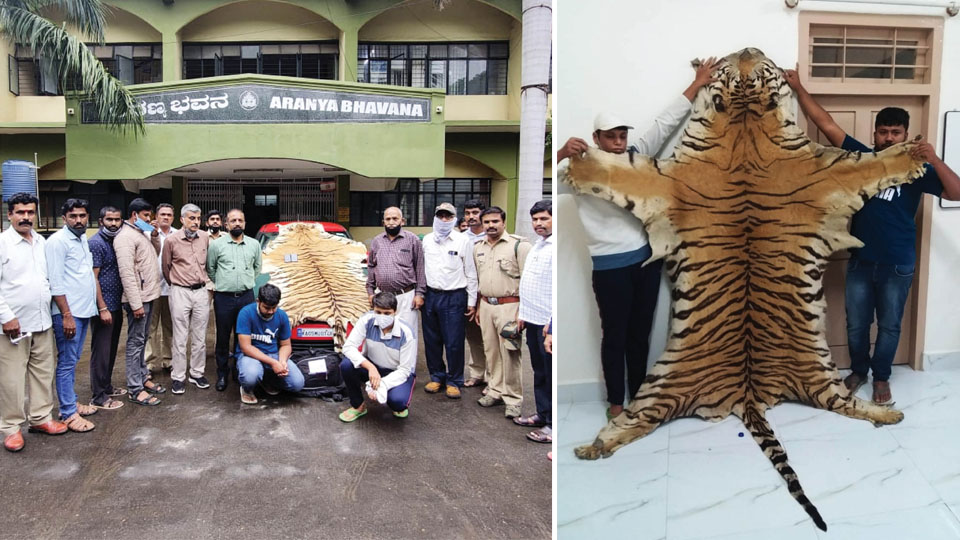 Mysore/Mysuru: The Mysuru Forest Mobile Squad has arrested two persons and seized a tiger pelt from them yesterday.

Deputy Conservator of Forests A.T. Poovaiah, who led the team, said that they arrested Akash Rao and Vishnu, who are in their twenties, and seized the tiger pelt. Both are from Santhemala near Krishna Raja Sagar in Srirangapatna taluk in Mandya district. The duo was trying to sell the huge pelt. A Maruti Swift car that was used to carry and market the pelt has been seized.

“We had some information that two persons were trying to sell the pelt and we were tracking the two persons from the past two months. Recently, we got information that they are trying to sell the pelt near Mysuru. We went in the disguise as buyers and arrested them near Sri Chamundi Wild Animals Rescue and Rehabilitation Centre at Koorgalli,” Poovaiah told reporters.

Officials said that they are suspecting that there are a few more people involved in the crime. They are tracing the contact details of the arrested duo. According to Poovaiah, the pelt was over 10 years old and there was all likelihood of obtaining permission from the Forest Department to convert the pelt into a stuffed animal (taxidermy).

Forest authorities have registered a case under Wildlife Protection Act 1972 and other Acts. They are yet to confirm whether the arrested were acting as middlemen or were also involved in hunting the tiger. They have seized the car which was used for the crime.