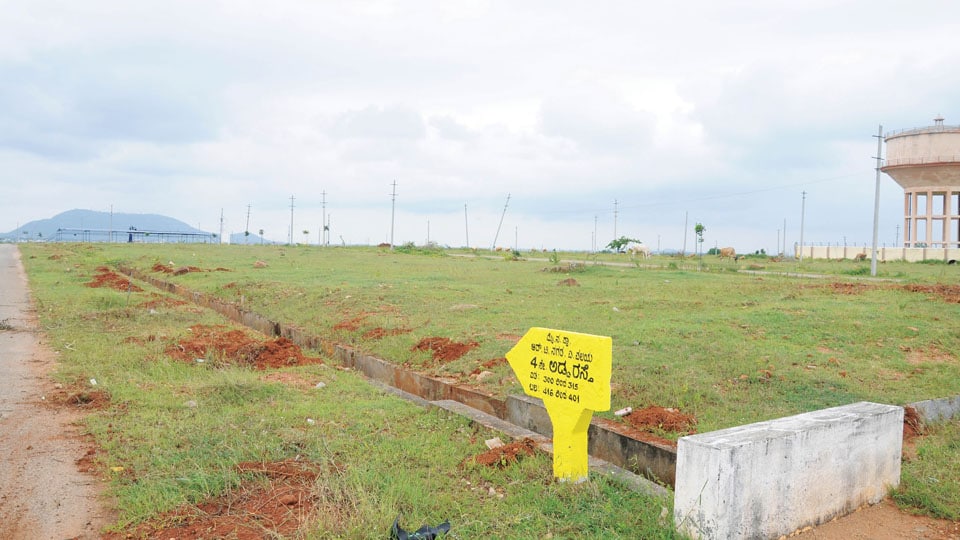 Mysore/Mysuru: The cash-strapped Mysuru Urban Development Authority (MUDA), which had been looking at newer avenues of revenue, seems to have succeeded in achieving this to some extent, as the Government Body has fetched a whopping Rs.130 crore through e-Auction of 196 sites out of the 300 it had put up for auction recently.

The online auction of sites took place between Aug.13 and 20, during which MUDA succeeded in disposing off 196 out of the 300 sites. As there was only a single bidder for each of the remaining 104 sites, MUDA decided not to allot these sites and wait for another round of auction, expecting that there will be more bidders.

The Authority has fetched a whopping Rs.130 crore from the e-Auction of 196 sites, the online auction of which ended on Aug. 20, in four registration phases with 75 sites in each phase.

MUDA Commissioner Dr. D.B. Natesh told Star of Mysore that the successful bidders had to remit 25 percent of the site bid value within three days of the auction and the remaining 75 percent in the next 45 days or with an Interest thereupon.

Pointing out that MUDA will immediately issue Title Deeds to all successful buyers upon payment of the site bid value in full, he said that such Title Deed holders have the liberty to re-sell the sites if they want, without no waiting time.

Continuing, the Commissioner said that MUDA also has land measuring from 3 acres to 10 acres in its possession in prime localities such as Vijayanagar Second Stage, Dattagalli and J.P. Nagar, which can be used for executing the Authority’s ambitious Affordable Group Housing Project.

Noting that there is a proposal to utilise the Rs.130 crore earned from e-Auction of sites for the execution of the Housing Project, he said that there is a great demand for Group Housing Schemes.

Dr. Natesh further said that MUDA has also planned to shortly allot as many as 150 CA (Civic Amenities) sites available with it to Trusts, Service Organisations, Associations, Educational Institutions and the like, which is expected to bring in more revenues in the coming days.