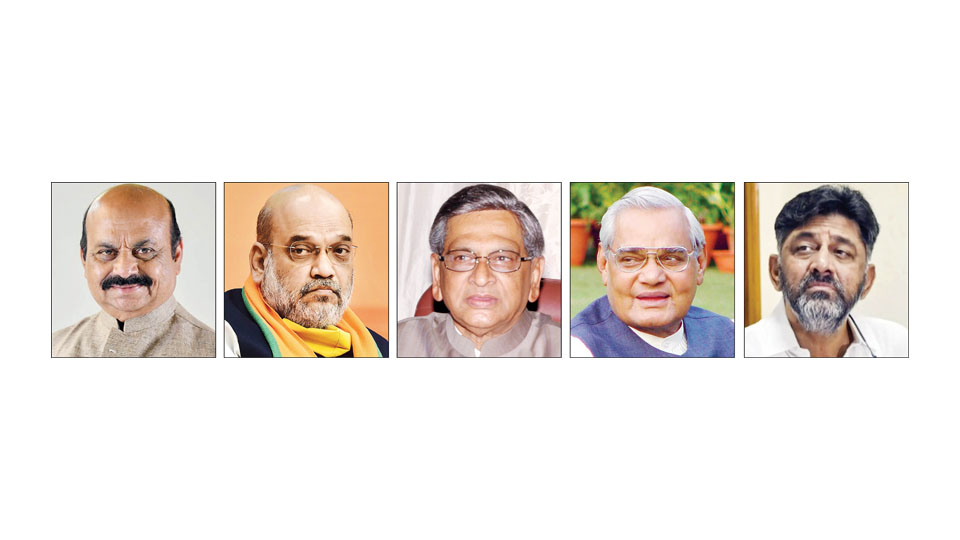 Now that the top leaders of consequence from the Congress and BJP are in Karnataka, probably because they are expecting an early poll for State Assembly, I decided to express my thoughts on this idea of ‘advancing the Assembly polls’ by the ruling party (here BJP) hoping it would bring them victory.

It is a paradox, the same is the hope of the Opposition Congress, why even of JD(S)!

This possibility of BJP advancing the Karnataka Assembly polls due in April-May 2023 to this November 2022 was first told to us by none other than the President of State Congress D.K. Shivakumar. Of course, he merely fired a shot in the dark by saying that there was a thinking in the BJP in that direction. A prophecy of a mind-reader?

Well, looking at the landing on Karnataka by two honchos of BJP and Congress, no ordinary leaders, Rahul Gandhi of Congress and Amit Shah of BJP and their visit first to the sacred Mutt of Lingayats, Sri Siddaganga Mutt, clearly suggests there must be more to the coming election than meets the eyes. One may even wonder who is trying to fool who in this game of ‘yes… no… yes… no.’ If BJP is really throwing the gauntlet of early (November) election, then Congress too is ready to pick it up. Now let this shadow game continue until we hear one way or the other. So wait a few months more.

The provocation for D.K. Shivakumar’s ‘thinking’ of a possible advancement of the Assembly election was the impressive victory in four of the five States which went to polls in February-March 2022. May be, D.K. Shivakumar thinks the BJP, because of its mighty victory in the North, might be dreaming of repeating a similar feat in Karnataka too. But then he forgets those elections were not ‘advanced’ but were held as per the Constitutional norms after completing five-year term. Anyway, even if those elections were advanced, looking at the absolute majority of the winners, it is clear the opposition would have lost.

However, why should the BJP fall into the trap laid by D.K. Shivakumar? The question is: Advantage to whom if elections are advanced? BJP may think it has good many developmental works to show to the people and that may work to its advantage. Really?

The Congress may think it has conducted many protest marches, important one was on Mekedatu Drinking Water Project, and its frequent criticism of BJP as a Communal Party, what with issues like price rise, Hijab, Halal cut meat, boycotting Muslim shops ad nauseam.

I have a gut feeling that if the poll is advanced, advantage is for Congress (no matter who the CM will be — Siddharamaiah or D.K. Shivakumar). After all, have we not seen our own numero uno Chief Minister S.M. Krishna, considered the best CM in India, of Congress, ‘advancing’ the poll with great aplomb and confidence and then losing? This led to coalition, betrayal, political chaos including President’s rule in 2007-2008 after which the BJP came to power in May 2008.

Later in 2013 Assembly election, Congress won by a majority and Siddharamaiah was well-ensconced as CM for a solid five-year term. He ruled with a firm hand, except there was discrimination. The hubris and arrogance of power seemed to overwhelm him, which apparently made Congress lose a few more seats to capture power. Rest is history as this generation knows. Let it be.

If S.M. Krishna, who overcame many hurdles like Dr. Rajkumar’s kidnapping by forest brigand Veerappan, drought, Cauvery water dispute and many such, he like a good administrator, [who made Bengaluru an unparalleled electronic city of our country] despite taking everybody with him, LOST by making one mistake — of ‘advancing’ the election due to overconfidence infused into him by his maverick advisors. In contrast, BJP, with this kind of Ministers and performance, does not seem to have a fair chance to win if the election is advanced.

I think there were some             others who have burnt their fingers by ‘advancing’ the poll at the tail-end of their ‘questionable’ rule.

Therefore, all things considered, it is NOT advisable for BJP to advance the election to November or any other month (as per their astrological belief). BJP must remember that in the past eight months,                                   after Basavaraj Bommai became the Chief Minister, the achievement of BJP was a series of controversies — like anti-conversion bill, the hijab row, saffron flag row and the latest about the halal meat. The Congress may exploit this situation as they are masters in manipulating this kind of controversies to their advantage. Add to this the spiralling petrol price and the persisting menace of the pandemic.

As for Congress, at present there is no State for Congress to come back to power in the country, specially in the South, than in Karnataka. But it depends on how the BJP plays its political cards when the election is announced. The big question staring Congress in the face (faces of D.K. Shivakumar and Siddharamaiah), is whether the Congress with just 69-odd seats can rise up to 113 seats in the State Assembly to capture power? Time alone can say. But for BJP, November cannot be the time.

Let BJP in Karnataka remember that the then Prime Minister Atal Bihari Vajpayee was not in favour of advancing the Lok Sabha election in 2004 as he feared defeat but an overconfident BJP still decided to go for it.

One reason was attributed to lack of co-ordination among the BJP workers that existed earlier under Vajpayee. So do we find the kind of co-ordination with the Karnataka BJP now? Let BJP introspect.

It is said there were two reasons behind the BJP’s 2004 Lok Sabha poll defeat.

First the slogan of ‘India Shining’ that went against BJP because the Opposition insisted there was nothing shining, only darkness! The second major reason for BJP’s 2004 failure was the decision to hold early poll. Atal Bihari Vajpayee was not in favour of early poll. But it was said that others, including Lal Krishna Advani who was the Prime Ministerial candidate in waiting, wanted to advance the poll with that kind of hollow, bombastic slogan ‘India Shining’ when we all knew that Atal Bihari Vajpayee was a soft Prime Minister and always believed in compromises (calling it cleverly as ‘compulsion of coalition’), relying on hope!

Therefore, the BJP should not be in a hurry, like Vajpayee and S.M. Krishna, to advance the Assembly poll in Karnataka. Remember, those who do not learn from the past mistakes are destined to perish.

5 COMMENTS ON THIS POST To “Early Assembly polls for Karnataka: Advantage Congress or BJP?”