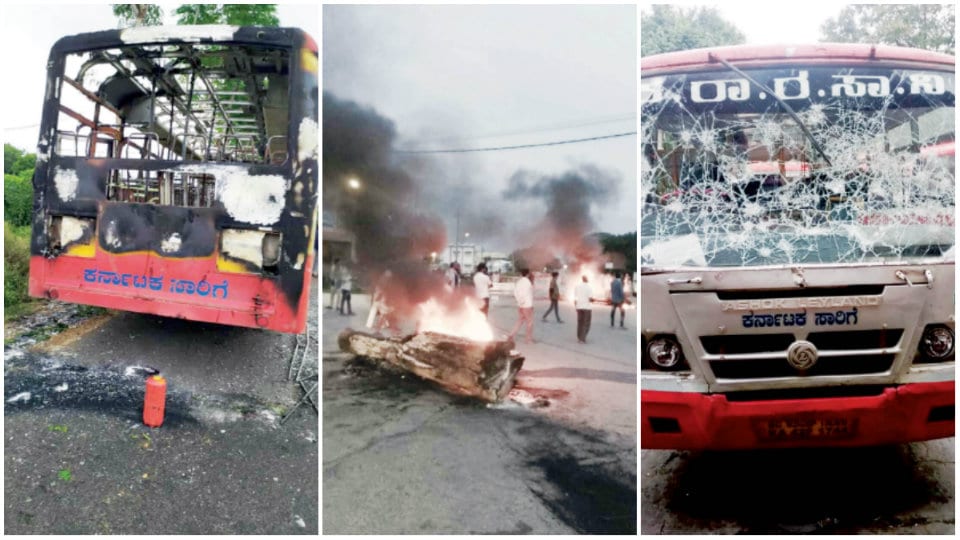 Mandya / Bengaluru, Sept. 4 (Nagaiah&BCT)- Buses were torched and schools and colleges shut as the Karnataka Congress called for a State-wide bandh today to protest against the arrest of its trouble-shooter and six-time undefeated MLA D.K. Shivakumar (DKS) by the Enforcement Directorate (ED) last night in New Delhi under the Prevention of Money Laundering Act (PMLA) after a long session of interrogation.

Though it was a State-wide bandh call, the impact was felt more in Ramanagara, Sathanur, Kanakapura and surrounding areas where Shivakumar has a lot of followers and political clout. Soon after the Kanakapura MLA’s arrest, protests erupted across Karnataka, which turned violent in Bengaluru Rural and Ramanagara districts. Congress supporters blocked the Bengaluru-Mysuru Highway and four KSRTC buses were stoned today. The bandh hit Bengaluru and affected the Bengaluru- Mysuru traffic.

Over 10 buses were torched and stones were pelted in Sathanur since last night, following which the State Police has asked the Karnataka State Road Transport Corporation (KSRTC) to not operate buses in Ramanagara until clearance is provided. Crowds shouting slogans blocked the main roads in Channapattana and Kanakapura and burnt tyres.

To thwart untoward incidents, KSRTC buses have re-routed in the wake of ugly protests. The Mysuru-Bengaluru services have been restricted and are operating via Magadi and Huliyurudurga from Maddur on the Bengaluru-Mangaluru Road up to Nelamangala. Police stopped buses at Bidadi. Early morning bus commuters travelling from Bengaluru to Mysuru were asked to travel via Channarayapatna and Kikkeri making their three-hour journey into a six-hour one.

Control rooms have been activated and divisional officers have been asked to act suitably,” the PRO said. Mysuru, Mandya, Chamarajanagar, Bengaluru Rural Inspector Generals of Police have also been alerted for precautionary measures.

The Police have also issued an advisory for commuters about road block and deviation information, which mentions that the Bengaluru-Ramanagara-Mysuru road has been blocked due to protests at the Ijoor circle. Meanwhile, security has been beefed up near Chief Minister B.S. Yediyurappa’s residence and around the BJP offices in Congress’ strongholds.

Rapid Action Force has been deployed in Ramanagara and Kanakapura as a precautionary measure. Enraged supporters of Congress strongman have called for a Ramanagara District bandh tomorrow. Ramanagara Superintendent of Police Dr. Anoop Shetty is camping in the troubled areas. He told Star of Mysore that two persons have so far been arrested for rioting.

Both Ramanagara and Kanakapura KSRTC Bus Stands wore a deserted look this morning as there were no buses. People and students were seen loitering around waiting for transport. More than 200 Policemen have been deployed at sensitive places near Doddaladahalli from where Shivakumar hails. But despite the presence of Policemen, rioting continued and the Police became mute spectators at many places.

Meanwhile, Congress leaders led by General Secretary K.C. Venugopal were denied permission to visit Shivakumar who is admitted in Ram Manohar Lohia Hospital in New Delhi. Shivakumar was admitted to the hospital this morning after he was arrested.

In a statement, Venugopal said, “The arrest of Shivakumar is a clear case of political vendetta by the BJP government at the Centre. After P. Chidambaram, yet another leader has been dubiously, vengefully and selectively targeted for standing up against the politics of horse-trading and subversion of mandate practiced by the BJP.”