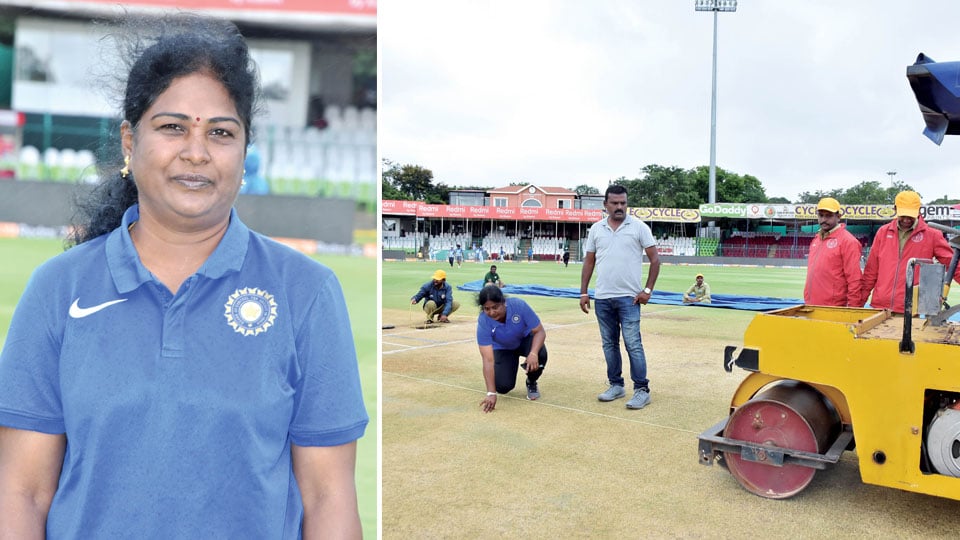 Having come from very humble background, she has risen to become India’s first woman pitch curator. A native of Doddaladahalli in Kanakapura taluk, Jacintha Kalyan went through several hardships before joining Karnataka State Cricket Association (KSCA) as a receptionist. She later developed interest in preparing wickets and grounds before getting through Curator Examination conducted by the BCCI last year. Joining her men colleagues at the KSCA, Jacintha has the credit of preparing wickets for many domestic, international and IPL tournaments. Star of Mysore caught up with Jacintha recently at the SDNR Wadiyar Stadium in city which played host to this year’s second leg of KPL. Excerpts…

Star of Mysore (SOM): Having come from a rural background how did you associate with cricket?

Jacintha: After completing my 10th standard, I joined Karnataka State Cricket Association (KSCA) as a receptionist in 1993. Later, I joined the VV Puram Evening College and completed my B.Com. Having completed 15-20 years in the Admin Department, the then KSCA Hon. Secretary Brijesh Patel deputed me to work in the ground. Later, slowly I developed interest and started working on the wickets.

SOM: How did you land in KSCA?

Jacintha: One of my friend’s elder brother who worked in the canteen, informed me aboutthe vacancy for the receptionist post. Since my family was going through a hardship, I had no other option but to join some work. When I got to know about the vacancy, I approached KSCA directly and was appointed to the post after an interview.

SOM: Preparing a wicket involves a lot of Science. How did you learn this art?

Jacintha: I totally agree with the fact that Cricket is Science and preparing the wicket is not an easy task. Earlier, wickets were being prepared but there was not much technology involved. But now everything has to be done according to the guidelines and specifications given to us by the Board of Control for Cricket in India (BCCI)and the International Cricket Council (ICC). I am very thankful to my seniors like Sriram, Prashanth, Zonal curators and BCCI curator P.R. Vishwanath who have encouraged me and taught me in detail the art of preparing wickets and the ground. I have spent nearly 4-5 years to know about wicket and ground preparation. Last year, BCCI conducted the Curator Examination and KSCA deputed me and my other colleague Ramesh to appear for the examination and both of us passed in flying colours. And now I am the only BCCI certified woman curator in the country which I feel very proud of and the credit goes to Brijesh Patel.

SOM: How is it different to prepare a wicket for a multi-day game and ODI?

Jacintha: There is a lot of difference in preparing a wicket for multi-day game and for the one-dayers. For a multi-day game, like a Test match, Ranji match and other age group State matches, the wicket has to hold itself for 4-5 days and for T20 and one-dayers, the preparation is entirely different. For a T20 game, the wickets have to be useful for batsmen and for a multi-day game, it has to help both the bowlers as well as the batsmen.

SOM: How was the response back in your home when they came to know about you becoming a curator?

Jacintha: My husband (Kalayan Kumar) knew about me working hard at the KSCA but he never expected me to become India’s first woman curator. Now that I have achieved this fete, he is very happy. More than him, my son (Sharath Kalyan) is extremely proud of my achievements. When someone asks about me, he just googles my name and shows them the articles appeared about me.

SOM: As we know, Cricket is a male dominated sport. And you becoming a curator, how did you feel?

Jacintha: There will be talks about male domination and people speak about me doing the men’s job. But for me what is important is that I continue to do my work sincerely so that the game is benefited and the players are happy with the wickets and ground condition.

SOM: How do you think the women’s cricket would develop in the years to come?

Jacintha: As we can see, women’s cricket is undergoing a lot of changes compared to previous years. KSCA especially has been encouraging women to take up the sport by providing facilities similar to that of men. I am very happy that young girls and women are coming forward to take up cricket. I also want to say that more and more women, especially the college-going, in mofussil centres should take up cricket so that we can have strong teams to compete at the State-level.

SOM: What has been your memorable moment so far?

Jacintha: About three years back, when KPL was underway, Bengaluru hosted India-A match at Chinnaswamy Stadium. At that time, I was just learning about preparing wickets and all my seniors were concentrating on KPL. I was given the task of preparing the wicket in Bengaluru and I did that with constant help from my seniors, who spoke to me over the phone. And after the completion of the match, Rahul Dravid Sir, who was coach for India-A, congratulated me for preparing good wickets and that is for me a memorable moment so far. And later, getting through BCCI Curator Examination was a dream come true.

SOM:  Thank You so much for your time.