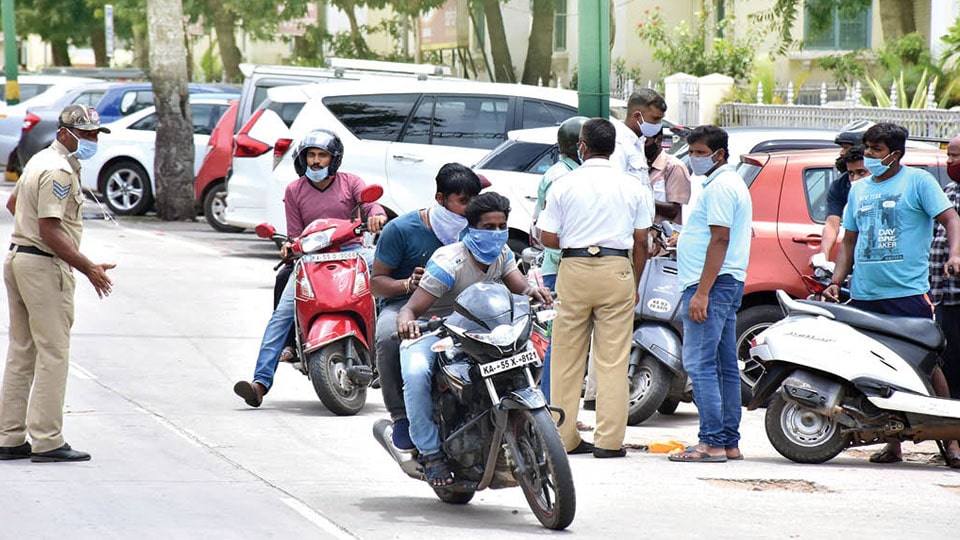 No peak hour checking; Only drunken-driving checks on Ring Road

Mysore/Mysuru: As promised to the citizens of Mysuru by City Police Commissioner Dr. Chandragupta, new people-friendly policing, combined with awareness, would come into effect from Apr. 1.

The Police have taken this step following intense criticism by the general public and elected representatives after the death of a two-wheeler rider while escaping a Police documentation check drive at Hinkal last week. Following the outrage, the Police have made major changes on the way how traffic penalties are imposed.

From Apr. 1, ‘Voluntary Checking Points’ or ‘Self-Checking Points’ will be set up at four to five locations across the city so that violators can clear the pending payments. “There is no use of force here. People can come on their own at the designated time with their vehicle details to check if there are any traffic violation cases booked against their vehicle. Our staff at the checking points will assist every visitor who can even pay the penalties. We are launching this as a pilot project in city from Apr. 1,” Dr. Chandragupta told Star of Mysore this morning.

No vehicle will be checked for documents during peak hours as this has been a major complaint against the Police. “We will not check vehicles during peak hours. Also, there won’t be vehicle checking in areas having high traffic density. Checking would be conducted between 10.30 am and noon and 3 pm to 5 pm from Monday to Friday,” he said.

Along the Ring Road and wherever there is intersection of rural roads with the Highway, there will be checking for drunken-driving on weekdays and weekends. “Our intention here is to avoid accidents by drunk drivers. Apart from drunken-driving, we will not check any other violations including helmets and insurance,” he assured.

There are many junctions where traffic from villages and areas located on the outskirts enters the main roads. “Here we have to enforce over-speeding and drunken-driving rules to prevent accidents,” he added. At the same time, we will increasingly use technology like CCTV cameras, hand-held cameras and others to catch violations.

Before any Traffic Stations or Traffic Sub-Divisions in city conduct any drives in their jurisdiction, public announcements would be made in that locality roads on traffic checks. “Loudspeakers will be used to tell the people on the purpose of the traffic checking drive and public would be asked to keep the documents ready,” he explained.

Four to five teams checking vehicles on a single road will be avoided and fines will be collected only by ASI rank and above officers and not the Policemen below the ASI rank. “As I have promised Mysureans, we want to be people-friendly and create awareness along with enforcement. We will reform the policing mechanism to make it more people-friendly,” he said.

After the Hinkal incident, the Commissioner held a series of meetings with the DCPs, ACPs and Inspectors on how to streamline traffic checking. “I have got reports in this regard from all and will issue memos to all Police Stations and Traffic Stations in a day or two to strictly follow the contents of the memo while enforcing traffic rules,” he added.

3 COMMENTS ON THIS POST To “Echo of Hinkal accident: Voluntary Checking Points for traffic violators from April 1”