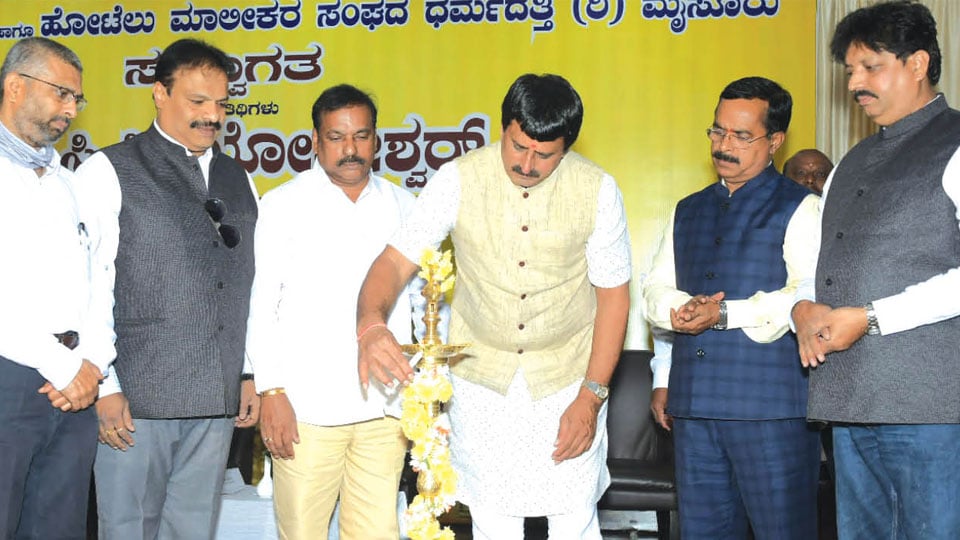 Sound and Light Show on cards at Chamundi Hill

Mysore/Mysuru: Continuing the momentum of announcing a slew of projects to Mysuru to build Brand Mysuru, Minister for Tourism, Environment and Ecology C.P. Yogeeshwar further announced certain plans to market the city as a tourist hub.

While last time he announced including Mysuru in a heliport circuit with helipads and halting and servicing stations at Lalitha Mahal Grounds, this time he came up with a series of projects including the complete greening of Chamundi Hill. While the Minister’s announcement of a green Chamundi Hill might sound music to the ears of Green activists, the plans of a ropeway at the Hill might meet with stiff opposition.

Speaking at an interaction programme on hotel and tourism industry development organised by Hotel Owners Association and Hotel Owners Association Charitable Trust at a private hotel in city last evening, the Minister said that his focus would be to convert the Chamundi Hill into a green space. “Importance will be given to tourism also with plans of a ropeway without damaging the environment and also a sound-and-light show atop the Hill to attract visitors to Sri Chamundeshwari Temple,” he said.

No tourist inconvenience: “Our intention is to prevent fleecing of tourists and we want to avoid any inconvenience to the guests. We will increase the beauty of the Mysore Palace Complex with attractive gardens and other attractions and also build a community hall that matches international standards. We have drawn up plans to organise many exhibitions to make the tourist flow perennial in Mysuru instead of restricting the tourist season from October to January,” he explained.

Adding that the Film City at Himmavu in Varuna and Heli Tourism Circuit that will connect Mysuru with other tourist destinations in Karnataka would be an added advantage to boost tourism, Yogeeshwar said that his Department was listing out heritage buildings for illumination all year round to attract tourists in the night.

“My intention is to project Karnataka as the best tourist destination in India and for Mysuru too I have grand plans so that tourists are made to stay here for longer instead of one or two days. Plans are afoot to make Mysuru a destination for historic monuments, tourist-friendly initiatives, entertainment and art, handicraft and artefact shopping hub,” he added.

Mysuru will be a focal point and the surrounding regions like Kodagu, Hassan and Chikkamagaluru too will be developed. Regarding the hotel industry, Yogeeshwar said that the Government has already accorded Industry Status to five and seven star hotels. “This will further be extended to single star hotels so that the burden of taxes is reduced,” he said.

Airing the industry demands, former President of Karnataka Pradesh Hotel & Restaurants Association and current State BJP Vice-President M. Rajendra said that steps must be initiated to open Southern Regional Tourism Office in Mysuru so that this region too gets grants from the Centre and the Office can be headed by an IAS Officer.

“The Mysuru City Corporation has considered cinema halls, kalyana mantaps, malls, hotels, lodges, choultries and community halls fall under super-commercial category and is levying a higher property tax and thus is unfair as no other  city in Karnataka has this tax structure. We urge the Government not to make this disparity and revert to the original tax structure,”  Rajendra said.

Other demands placed before the Minister by former President of Federation of Karnataka Chambers of Commerce and Industry (FKCCI) Sudhakar Shetty and Hotel Owners Association President C. Narayanagowda were constituting Dasara Authority, inclusion of Sringeri to the Mysuru Heli Tourism Circuit and uniform paints to heritage and Government buildings for a uniform look.