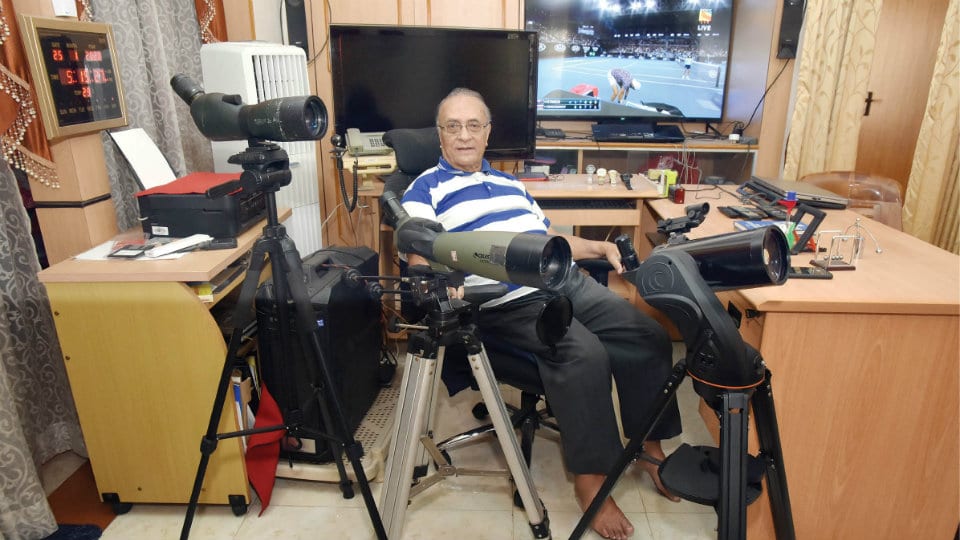 Though a total solar eclipse occurs about every 18 months or so, its visibility at any particular place is extremely rare. In order to experience the full effect of the eclipse, one must be on the ‘path of totality’, a narrow strip of the Earth’s surface — the umbra — where the Moon entirely covers up the Sun for a very short duration. The closer you get to the central line on the path of totality, the longer it lasts.

Total solar eclipses can be addictive. Once you have seen one, you are hooked and world over, we have thousands of ‘umbraphiles’ (the Latin word ‘umbra’ meaning ‘shadow’) who travel the globe chasing the Moon’s shadow.

One such umbraphile is Mysurean Dr. S.N. Prasad. His interest in the observational aspects of Astronomy was roused by a breath-taking view of the great comet Ikeya-Seki one early morning in late 1965 and he has been pursuing it ever since. Using two portable telescopes, he began to observe the wonders of the night sky extensively and set up observation sessions frequently to educate students and teachers. The great total solar eclipse of 1980, visible in parts of North Karnataka, triggered his obsession for viewing a darkened Sun in the shadow of the Moon. He is now a dedicated ‘Eclipse Chaser’ as well as an amateur astronomer.

What makes total solar eclipses so addictive to eclipse chasers? A total solar eclipse is one of the most magnificent and rarest of rare spectacles put on by nature and in the words of the celebrated ‘Mr. Eclipse’ Fred Espenak, it is electrifying, sublime, awesome and humbling, all at the same time. For most people, it is a once-in-a-lifetime experience.

Besides his wide-ranging professional activities as a science teacher-educator, Dr. Prasad has an abiding interest in Observational Astronomy and its related disciplines of Astrophysics and Cosmology. He is the former Principal and Professor of Physics, Regional Institute of Education (NCERT), Mysuru, and an educational consultant with over 40 years of professional experience. He is also actively involved in popularisation of science through lectures, demonstrations and writings.

Prasad loves travelling and photography and the two passions combined have led to many travelogues and photo-essays on a variety of topics published in his own blog. He has toured a large number of countries in the last few years and has observed total solar eclipses in China (2009), Indonesia (2016), and USA (2017), besides India (1980). He has also observed other interesting eclipses like the annular solar eclipse that occurred recently on Dec. 26, 2019. To see this, he led a team of ten enthusiasts from Mysuru to Bekal Beach Park in Kerala.

“Of all the eclipses I have seen, I consider the one that occurred on Feb. 16, 1980 as the best. I watched it from the scenic Tungabhadra Dam site with my family and friends on a glorious afternoon,” he says. At that time, Dr. Prasad was a UGC Research Fellow working at the Raman Research Institute, Bengaluru, under the guidance of Prof. S. Chandrasekhar FRS, a nephew of Prof. C.V. Raman. Dr. Prasad earned his doctorate degree in Physics soon after.

For the eclipse of July 22, 2009, he went to a remote hilly tourist resort near Anji city, about 80 km north-west of the big city of Hangzhou deep inside China because of its promising weather outlook. “Here, the duration of totality was a whopping 5 minutes and 48 seconds.  With clear skies most of the time, my expensive gamble paid off,” he says.

Not stopping at this, Dr. Prasad travelled to the beautiful coastal city of Palu in Central Sulawesi province of Indonesia to see the eclipse of March 9, 2016 where he says he was rewarded with a wonderful spectacle. Clarkesville near Nashville, Tennessee in USA was his outing for the eclipse of Aug. 21, 2017 that was only marginally less spectacular.

“My first rendezvous with an annular solar eclipse was at Dhanushkodi on January 15, 2010. The duration of annularity was an exceptionally long 10 minutes and 15 seconds, the longest in the whole of this millennium. The exposed area of the near-perfect ‘ring of fire’ was so large that there was hardly any noticeable drop in the brightness of the day,” Dr. Prasad reveals.

In contrast, a significant drop in both the brightness of the day and the atmospheric temperature marked the onset of annularity in the eclipse of Dec. 26, 2019.

Ask about his disappointments, Dr. Prasad says he is sad to have missed the total solar eclipses of May 20, 2012 in North-Eastern Australia and the latest one on July 2, 2019 in Chile. “Though another annular eclipse is due in parts of Northern India on June 21, 2020 and a total one on Dec. 14, 2020 in Chile/Argentina, I will have to wait till April 8, 2024 for another great total solar eclipse, which can be best seen in Texas, USA,” he says with a rueful smile.

However, the immediate goal of this 82-year-old umbraphile is to muster up another small group of enthusiasts for observing the annular solar eclipse of June 21 this year from a desert site in Rajasthan.

Dr. Prasad has had a distinguished academic career in Bengaluru during the fifties. He was a National Merit Scholar at the Central College, Bangalore University, passing out in 1960 with a Master’s degree in Physics. The University of Mysore awarded him a doctorate degree in Physics for his research work on “Infrared and Raman Spectroscopy of Aligned Liquid Crystals” done at the Raman Research Institute, Bengaluru during 1977-81.

He won the NCERT Seminar Readings Award in 1984 for a paper titled “A Continuing Experiment in Astronomy Education.” He also received a citation in 1986 from the London-based Commonwealth Association of Science, Technology and Mathematics Educators for his long-standing work on Astronomy Education. Inspired by activists and visionaries like Dr. H. Narasimhaiah (whom he knew well personally) and Dr. Narendra Dabholkar, Dr. Prasad is a strong believer in combating blind beliefs and superstitions. He also believes in developing a scientific temper in all walks of life through both proactive and reactive interventions.

“The plethora of bizarre beliefs and mindless rituals associated with the wonderful and utterly harmless natural celestial phenomena like eclipses, practiced even by the educated elite, are as deeply disturbing as they are meaningless,” he sighs.