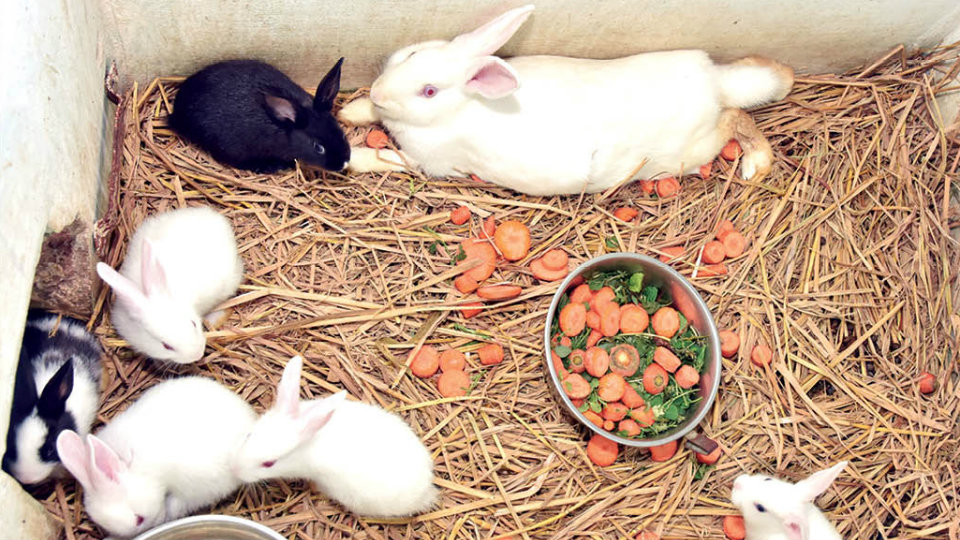 What it takes to feed carnivores, omnivores, frugivores, insectivores, foliavores and nectavores

One might think feeding a Zoo is easy. But Zoo keepers say that a lot of planning and preparation goes into animal diets. With more than 100 species of animals, reptiles and birds residing at Sri Chamarajendra Zoological Gardens or Mysuru Zoo, there are some interesting food requirements which need to be provided and catered for. Carnivores, omnivores, frugivorous, insectivores, foliavores, nectavores, combinations of the above and others all need to be considered.

Food preparation and supply is a time-consuming and expensive portion of having a large animal collection. Individual needs for each species is carefully assessed and reassessed on an ongoing basis. Throughout the day, Zoo keepers distribute the food on feeding tours and provide supplementary meals.

It’s not always possible to feed the animals what they would eat in the wild. The tigers, for example, can’t be fed deer meat, so they get beef. Zoo nutritionists analyse each animal’s diet from its native habitat, including the vitamin and mineral content. Then they try to come up with a replacement that has all the same properties.

Some animals, coming from the wild or other Zoos, have to be trained to eat foods other than what they’re used to, and it can take a while for diet planners to come up with a nutritious diet that the animal likes, or recognises as food. Some animals are just plain picky eaters, such as birds or snakes that show a preference for certain live mice or insects.

The role food plays in an animal’s life is important, too. If, in the wild, an animal normally spends all day hunting or foraging for food, then it needs to do the same at the Zoo. The Mysuru Zoo is the first Zoo in the country to have a vermin-compost unit, in-house meal worm and super worm production units and a live feed breeding unit.

Maintaining the animals, birds and reptiles is a tremendous task especially to ensure their health for which disease-free nutritious food is required, says Mysuru Zoo Executive Director Ajit M. Kulkarni. The Zoo spends about Rs. 6 crore to Rs. 6.5 crore annually only on animal food without compromising on quality.

There are five types of food namely meat (beef, prawns, fish and poultry), fodder, green fodder, grains, fruits and vegetables and bread, milk and eggs and these are tendered from suppliers through e-tenders. Meat is procured from a licensed slaughter house daily and the animals are first certified by the Mysuru City Corporation (MCC) Veterinarian and then slaughtered. Carcasses are then brought to the Zoo where the veterinarian certifies whether it is fit for feeding.

Food as per body weight

The carcass is then weighed and distributed among carnivores according to their body weight. For example, the meat given to a tiger weighs one tenth of its body weight. If the animal is pregnant or has given birth or in need of more food, the food needed is calculated and then given. Also, the quantity of the food varies on the condition of the animal. Before feeding, their food is once again checked by the respective animal-keepers, Kulkarni explains.

Dry rations – grains, pulses, busa, oil cakes, brawn, and poultry feed, jaggery, salt etc. are supplied once in 15 days and they are stored in a rodent-proof and moist-proof store room. Best grade fruits and vegetables fit for human consumption is procured from HOPCOMS and even if there is a minor quality issue, items are sent back and replaced.

Though bread is not a main diet, it is procured to feed animals in case of oral medication and a diet chart is maintained for each animal (sex-wise and health-wise). Water is drawn from bore wells and every enclosure has a water connection.

During summer, primates (chimps, monkeys etc.) are fed with high-water-containing fruits to cope with dehydration and salt balance. Dry fruits such as almonds, grapes, raisins, cashew etc. are given during winter to withstand cold. Pheasants and small primates are fed with super worm and meal worm which are in-house production. Rats and mice are also bred at the live feed breeding unit.

The Mysuru Zoo has a kitchen and a store in one of the oldest buildings on the premises. A new building with separate sections — with financial assistance from Central Zoo Authority — has been constructed. There is separate provision to store foodgrains, kitchen, and record room and computerised weighing bridge for accurate weighing and documentation. The store is rodent-proof and moist-free.

Different agencies have been fixed to supply food on tender basis and supplies are obtained through government organisations for certain items. Indents are placed to supply food as per prescribed diet charts. Proper cleaning before distribution of food in a systematic manner is ensured. The store functions under the direct supervision of Range Forest Officer and checked by Assistant Director and Deputy Director. Proper sanitation and good hygiene is maintained in the kitchen and store.

Zoo  Assistant  Director and  Head of the Veterinary Section Dr. K.R. Ramesh says, utmost importance is given to ensure that good quality food is given to animals. Various tests are conducted after procuring food items and only after they find food items fit for animal consumption, it is distributed.

Citing an example, Dr. Ramesh says after the certified carcass is brought to the Zoo store, it is evaluated once again at the Zoo and periodically, samples are sent to Institute of Animal Health & Veterinary Biologicals (IAH&VB) Lab in Bengaluru for testing. “If we are not happy with the meat quality, we reject it right away and then a sample is sent to the Lab,” he explains.

There are 151 species and each specie has its own diet chart based on the observations made by the animal-keepers and food is distributed accordingly, maintaining the natural feeding habit of each species. There are many insectivorous and they are fed with insects produced in-house. Some primates like to feed on grasshoppers which are procured from agricultural fields.

Mysuru Zoo is first in the country to establish meal worm and super worm breeding unit 10 years ago and the technology is much sought after by other zoos. At the unit, eggs of beetles are kept in trays, which then hatches and mini worms emerge from it.

The mini worms are then separated and put into another tray along with food, where it develops into large worms and then into pupae from where young beetles emerge to grow into adults. The whole process takes about 45 to 50 days.

The Live Feed Breeding Unit was established more than 20 years ago where mice, rats and rabbits are bred.

Also, chicken eggs are hatched. The young ones, after a few days, are separated according to sizes and these are fed to reptiles and the size of the prey is decided based on the length and age of the snake. The units are maintained by Krishna and his team.