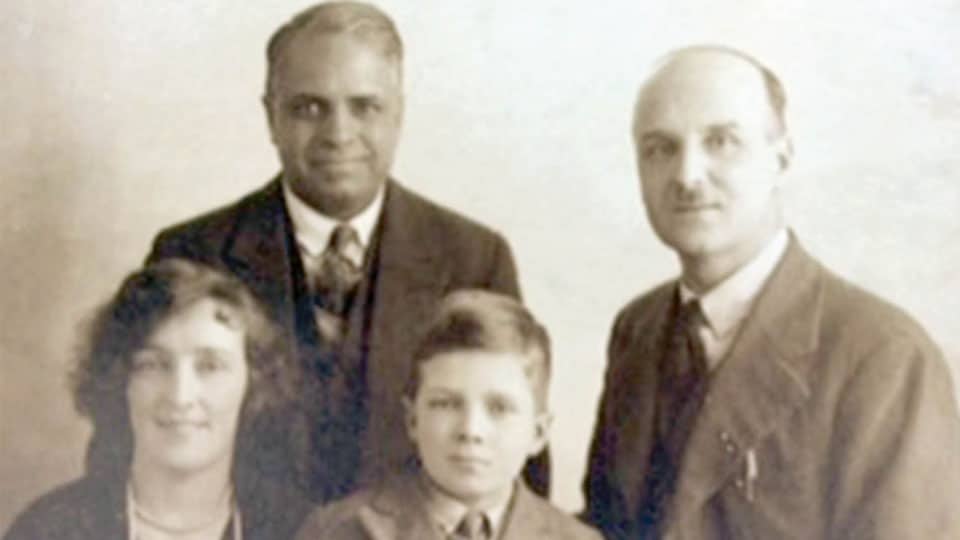 Images of the 1920s and early 1930s are reprints of the descriptions of my father, M. Venkatesh and mother Mukta, a memory bank for me. Venkatesh was an engineer in the Mysore State Railways.

Mysore was a conservative society, each community adhering strictly to their customs but living together in amity. My parents moved from Lakshmipuram where they were neighbours of R.K. Narayan and his family, to the first of the Railway Bungalows on Krishna Raja Sagar (KRS) Road, Yadavagiri.

At that time some English officials of the Railways also lived in Mysore. Father spoke of the Sinclairs whose family photo was in our album. In this enclave, D.V. Narasimha Rao who founded the National Institute of Engineering (NIE), lived next door. His wife Tripurasundari Devi would drop in, dressed in silk sarees in “Kachche” style, diamonds glittering in her ears and nose rings. She spoke mellifluous Telugu, the “Italian of the East”, according to Mukta.

Rohinton and Diana Mirza, nee Kotawala, were neighbours too. Diana, an exotic beauty, wore her saree in the Parsi style, a diaphanous scarf tied around her head. She was made up like the western film stars of those times; bright lipstick, plucked eyebrows, a kiss curl on each cheek. Her two unmarried sisters, Nurgesh and Zarina Kotawala also lived with her. Nurgesh wrote poetry and a slim volume of hers was on our bookshelf for many years. Zarina had a newspaper column on social events.

The Thumboo Chetty family was influential in Karnataka. T.R.A. Thumboo Chetty was a devout Catholic. He had held high office in the Mysore Court in the late 19th century. His fourth son Bernard Trichinopoly Thumboo Chetty [1877-1952] carried on the family tradition. Maharaja Krishnaraja Wadiyar conferred honours and titles on him and his wife.  He took over the post of “Huzur Secretary to the Maharaja” from Sir Mirza Ismail in 1922. The British honoured him with an OBE in 1935 and a knighthood in 1946. His wife, Selvavathy’s Christian name was Gertrude; after her husband’s knighthood she was addressed as Lady Thumboo Chetty.

The Thumboo Chettys were devotees of St. Philomena, a thirteen-year Greek Princess, said to have been martyred in 304 AD. Thumboo Chetty obtained a relic of the saint from Rome and a church was built in her name. Maharaja Nalwadi Krishnaraja Wadiyar laid the foundation stone for it in 1933. A French architect, Daly, built the church in neo-Gothic style, resembling Cologne Cathedral. There are stained glass windows and a statue of Philomena in the Cathedral. Some church scenes for the film “Amar, Akbar, Anthony” may have been shot there. It is now called the “Cathedral of St. Joseph and St. Philomena” as an older church of St. Joseph existed in the same area, founded by Mummadi Krishnaraja Wadiyar in 1843.

The Thumboo Chettys named their elder daughter Philomena Rukmavathy. Excelling in violin from a very young age, she went abroad in her teens for higher studies in music. A concert artiste, she was acclaimed for her virtuosity and praised by Yehudi Menuhin. She always wore a saree for her recitals, set off by Indian ornaments, favouring a bejewelled “Daabu” [gold belt]. In 1934 she and her mother were presented at the court of King George V and Queen Mary.  An account in “scroll.in” describes Philomena in a red and gold saree wearing emerald jewellery while the mother was resplendent in purple and gold set off by diamonds.

Philomena married Francis Thumboo Chetty, a relative and had five children. Sadly one of the children was born with special needs for whose care she gave up her concert tours abroad…but never her music. She died in March 2000. Sister John Britto [Padmavathy Dorai Chetty], a noted pianist of Good Shepherd Convent, Mysore, was related to her.

In 1937, British film-makers Robert J. Flaherty and Zoltan Korda produced a film called “Elephant Boy” based on Rudyard Kipling’s story “Toomai of the Elephants”, in Mysore. The lead role was given to thirteen-year-old Sabu who was working as a mahout in the elephant stables of the Maharaja. His affinity with the animals combined with his athleticism and charm made him a star. The film won an award at the Venice Film Festival. Sabu went to America acting in films as “Sabu Dastigir”. Becoming a US citizen, he joined the Air Force and was decorated for his bravery during World War 2. He died short of his 40th birthday in 1963.

The sepia photographs and revived remembrances are both evocative and emotive while sharpening our perception of change. The old stars still scintillate but against a fading background.