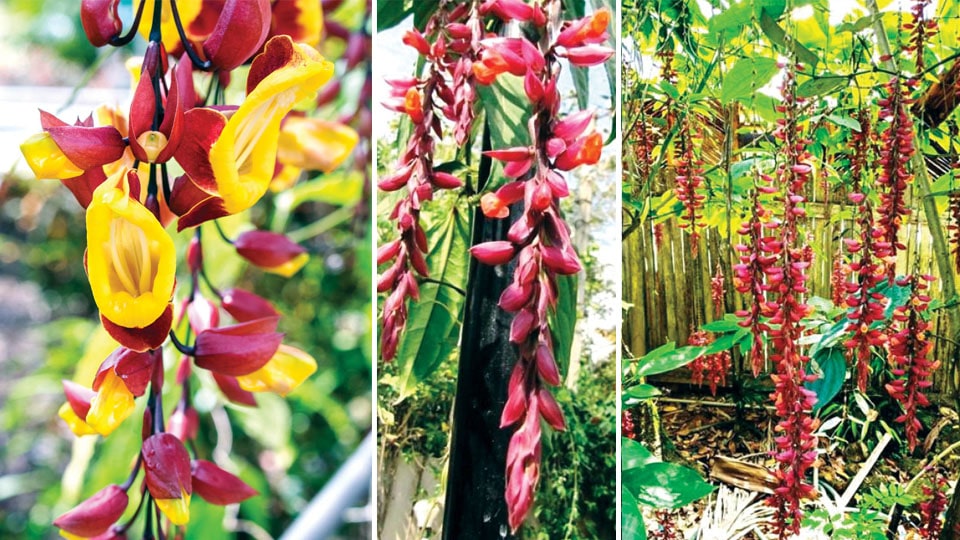 Vines in common parlance are the climbing plants. They are the essential ingredients of any garden and best suited for open walls, balconies and often as curtains for display. There are innumerable varieties of ornamental vines to choose from among the foliage and flowering types. However, the flowering vines are the most elegant to decorate fences, pergolas, trellises, arbours and arches. Now the question arises as to which one is the most elegant of all?

A great number of plant growers around the world have chosen ‘Mysore Trumpetvine’ as the most beautiful vine in the world. It has been awarded not only the prestigious ‘Royal Horticultural Society Award of Garden Merit’ long ago but also acclaimed in the book ‘Vines of the World’ as the prettiest flowering vine in the world. It is highly admired for its unique type of pendulous flowers which hang on thin, almost hair-like threads in spectacular long hanging chains in the form of elegant chandeliers to create a stunning display.

It is  known as ‘Kamanabillu balli’  in Kannada and by other names in different countries of the world: Indian Clock Vine, Clock Vine, Brick & Butter Vine, Lady’s Slipper Vine, Dolls’ Shoes (due to the flower shape and large size). Some gardeners have given it the nickname of the Rhubarb & Custard Vine because of its colours. The scientific name  is Thunbergia mysorensis (Acanthacea family). The generic name commemorates the Swedish botanist Carl Peter Thunberg, one of Carl Linnaeus’s pupils and a prolific collector of Asian plants.

The species epithet is a reference to the city of Mysore, its birth place(?!). It is an amazing vine from Southern India where it climbs through trees in tropical montane forests. It has become naturalised in Mediterranean climates and elsewhere. It is cultivated as a popular ornamental vine all over the world  in tropical and sub-tropical gardens, conservatories and greenhouses. I have seen them growing in frost-free temperate climates in USA such as coastal Southern California.

A woody-stemmed evergreen plant, often reaches  20 ft. The stems are supposed to twine clock-wise in due course of time to create an ornamental effect similar to Wisteria floribunda. Leaves are densely covered on the stems, oppositely arranged, ovate lanceolate  (lancelike), glossy plastic like dark green and 5-6 inches long. They are scabrid, coarsely nerved and dentate with an acute to acuminate apex and a truncate or hastate base. The inflorescence is a pendulous raceme with two lipped tubular flowers with an obscure calyx. They  are bilaterally symmetrical, consisting of five fused petals, red calyces and a floral tube with a long gaping mouth  (appx.  3 inch)  which  is yellow along edges and down the throat with red coloured reflexed petals. Filaments ciliate, anthers spurred: Fruit a  Capsule 3 cm long.

The vine blooms in the cold season  (peak flowering season) follows up to spring. Nevertheless, the flowering is unpredictable as the flowers can be present year-round under favourable conditions (mild climates).

Scarlet Clock Vine (Thunbergia coccinea), a  close cousin of T. mysorensisis also cultivated in India. It owes its origin to North Eastern India. The vine can be easily distinguished by the shape and colour of flowers, as well as leaves structure.

An ideal landscape flowering vine that can be grown on ground or containers.

Curzon Park entrance (front office) and big home gardens. There is no doubt that Thunbergia mysorensis with its dazzling floral display is an absolute show stopper, no matter where it is grown.