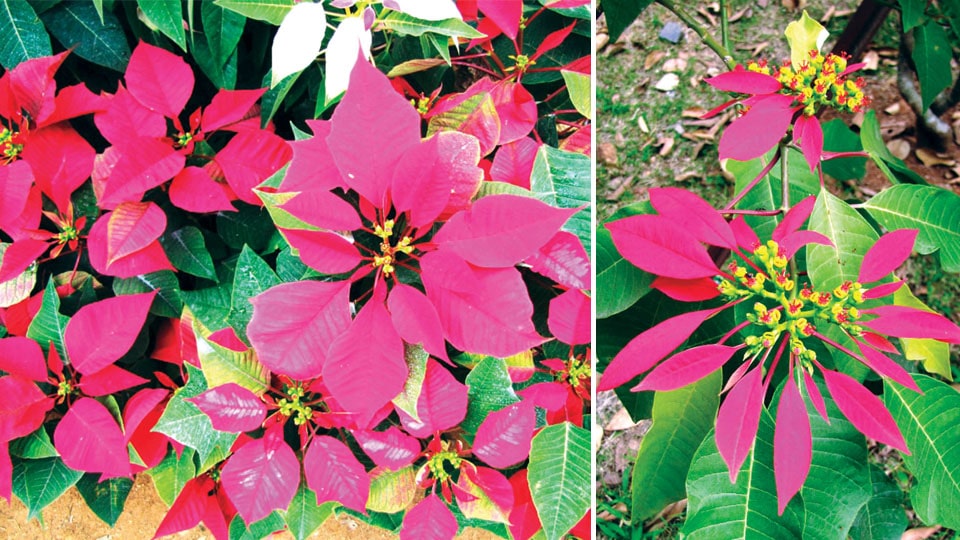 Poinsettia: The legendary holiday plant is a winter delight

Florals and foliage of several species of ornamental plants  are associated with the festive season of Christmas. Apart from the well known, rather celebrated, ‘Christmas tree’ a wide variety of plants embrace “Christmas” in their common names  e.g. Poinsettia, Holly, Mistletoe, Ivy, Christmas Cactus, Christmas Bells, Christmas Roses (Helleborus ssp, Hydrangea sps), “Snow Rose” or “Winter Rose” (Serissa foetida). Together they are called ‘Christmas plants.’ Another common term used for these herbals in western countries (America and Europe) is  ‘Holiday plants.’* Among these,  ‘Poinsettia’ is  the most admired. It is next  only to ‘Christmas Tree’ in popularity. With brilliant red floral display held against rich green foliage it is adorable with its appealing presentation of the traditional Christmas colours. It’s relationship to Christmas dates back to 16th-century. According to a Mexican  legend  a poor little girl (Pepita or Maria ?) was very much worried as she had no gift to celebrate Lord Jesus’s birthday; during which time, an angel asked her to offer any gift with love. The young girl collected handful of weed plants growing on the road side and placed them in the manger (a makeshift crib for the Baby Jesus — a Christian symbol). Miraculously, the weeds blossomed into beautiful red stars, the present day ‘Poinsettias.’ Thus, the plant became legendary.  Being popular they are sold everywhere from florists and nurseries to supermarkets and convenience stores all around the world.  Infact, ‘Poinsettia’ trade is a multi-million dollar business in the US and Europe.

It’s common English name  ‘Poinsettia’ is in honour of  Joel Roberts Poinsett, the first United States Minister to Mexico, who introduced the plant to the US in 1825.  The plant is also known as ‘Christmas Star,’ ‘Christmas Flower,’ ‘Crown of the Andes,’ ‘Painted Leaf,’ ‘Mexican Flame Tree,’ ‘Lobster Plant’ and ‘Lalpata in Hindi.’ It’s scientific name is Euphorbia Pulcherrima  (syn. Poinsettia Pulcherrima)  belonging to the family Euphorbiaceae. The generic  name ‘Euphorbia’ is  derived from Euphorbos, the Greek physician of King Luba (or Juba) II of Numidia (52–50 BC – 23 AD), who married the daughter of Anthony and Cleopatra; species epithet  ‘Pulcherrima’ means “very beautiful.”

Euphorbia Pulcherima is a native to  tropical Central America and Mexico. It is a shrub with smooth green erect stems, growing upto10 ft. When cut, a milky sap  oozes out  from the stem. The leaves are green, large, oval shaped and dentate (“toothed” margins) on the sides and pointed at the tips. Flowers are borne at the stem tips. The  floral  arrangement is quite different from the typical floral plan and the flowers appear inside a small cup-shaped structure called Cyathium (or Cyathia) at the centre of the brilliantly coloured “bracts” (bracts are actually modified leaves).  Each Cyathia, yellow in colour, contains unisexual, apetalous (without petals) flowers. The inconspicuous male flowers occur in clusters and are reduced to a single red stamen, while the female ones consists of a single ovary (pistil) hidden within the cyathium. The rim of the cyathium bears nectar glands which are attractive to insect pollinators. Fruits are called capsules with ovoid  shaped pale grey seeds.

The Christmas season is  also called the ‘Holiday Season’ or the ‘Festive Season,’ an annual recurring period from late November to early January as recognised in many Western and other countries. Plants used for winter  festivities during this season  are called ‘Holiday plants.’

Toxic compounds are found in the milky latex, but they  are of low toxicity. If ingested it induces abdominal pain with vomiting and diarrhoea. Frequent contact with skin may cause redness, swelling and blisters lasting for a few minutes.