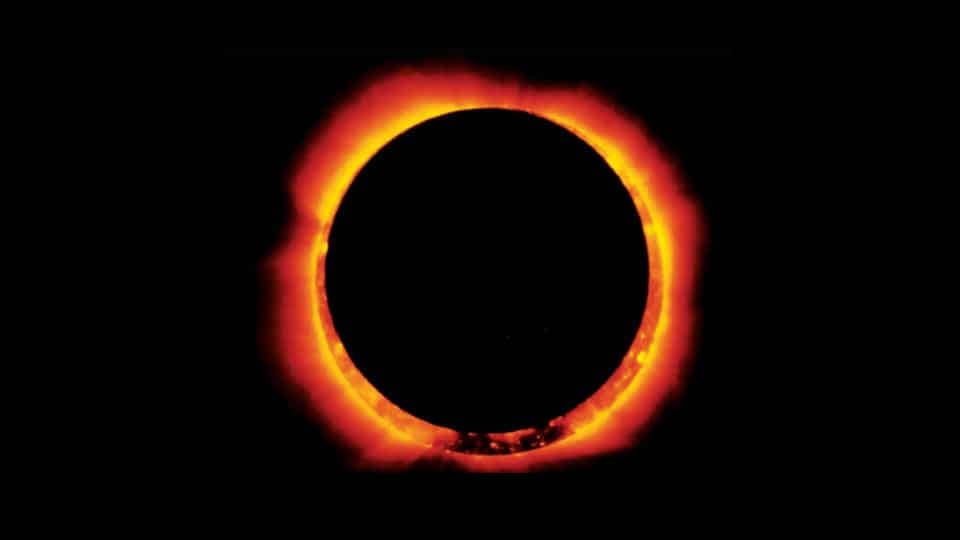 Humans have always been fascinated by the effect of solar eclipse. Before they were predictable, such events caused excitement, bemusement or fear while they were in progress. As soon as they could be predicted, they have prompted even greater anticipation, provoked a visceral sense of wonder, discussion, preparation, travel and, yes, sometimes, fear.

Sky-watchers will get to soak up their third solar disappearing act of the year when Annular Eclipse cuts across Middle East and Asia this Dec. 26. The eclipse will race across Saudi Arabia and Oman, hit the Southern tip of India and Sri Lanka, and then cross over to Sumatra, Singapore and Guam.

This Weekend Star Supplement prepares readers for the Annual Solar Eclipse of the year 2019, provides graphic details of the celestial event and how to watch the memorable spectacle.

Sun to form Ring of Fire in Annular Solar Eclipse on Dec. 26

Sky-watching is a fascinating experience and one of the most captivating events in Astronomy is the observation of an ‘eclipse’. Solar eclipse is a spectacular event and since ages, human beings have stared in disbelief at the gradual disappearance and re-emergence of Sun.

Indians are privileged to witness the most astounding, anticipated and striking ‘Annular Solar Eclipse’ on Dec. 26. This rare phenomenon, also called the ‘Ring of Fire’, can clearly be seen in some parts of India. Though solar eclipse happens in regular intervals, the annular solar eclipse is a unique event and it occurs when the Moon’s apparent diameter is smaller than the Sun’s, thus obscuring most of the Sun’s light and make it appear like an annulus (ring).

Cheruvathur in Kasaragod district of Kerala is the ideal place to witness this remarkable event as the eclipse first begins in India from here. The solar eclipse can clearly be seen at Kurukshetra (Haryana) after a gap of 10 years. Kerala’s Kasaragod, Kannur, Thalassery and Wayanad districts and Kalpetta in Wayanad district are places where the eclipse can be seen perfectly. The event can be seen from Mangaluru and Udupi too.

From Mysuru, it can be seen partially as we cannot completely notice obscurity. The percentage of obscurity of moon in Mysuru is about 99%. Some of the places in Karnataka are privileged to witness the event. People in Nanjangud and Gundlupet can see cent percent annularity. A Pinhole Camera is the simplest way to view an eclipse but the solar image will be inverted.

The path width of the solar eclipse shadow is 164 kilometres and will travel at a speed of 1.1 kilometres per second. In over three-hour trajectory, the annular eclipse will cover approximately 12,900 kilometres which is 0.34 percent of Earth’s surface area.

Maximum or greatest phase of the eclipse

and annular eclipse ends 9.28 am

Percentage obscurity of Sun by Moon About 99%

Annular eclipse occurs when the Sun and Moon are exactly in line with Earth but the apparent size of the Moon is smaller than that of the Sun. Hence, the Sun appears as a very bright ring, or annulus, surrounding the dark disk of the Moon. Annular solar eclipse is different from total solar eclipse. The Sun will never be completely obscured by Moon. So, darkness or tenebrosity never descends on the surroundings. The name “annular” had its origin from a Latin word “annulus” meaning “ring.”

Eclipse photography is fascinating. For telescopic use, filters made of chromium deposited on glass pass the requisite amount of photospheric light to photograph and view the partial phases while also giving images of excellent definition.

A very slight increase in transmission at the red end of the spectrum often gives a pleasant tint to the solar image. Welders’ glass of #14 or #15 grades is also safe for visual or photographic viewing, although the colour is usually less pleasing.

Filters that go on the eyepiece end are always liable to crack or be otherwise damaged under the concentrated solar radiation, so are much less safe than filters placed above the objective lens. But to observe a total or partial lunar eclipse, there is absolutely no harm in watching with unaided eye. There is absolutely no necessity of a telescope or binocular to observe total or partial lunar eclipses.

The brightness of solar corona during annularity is approximately that of the full moon and the corona during totality is equally safe to watch. However, staring at crescent or other partial phases of eclipse can be hazardous to eyesight.

To observe partial or total solar eclipse, it is safe to make use of solar filters. The key factor in safe solar filters is that they do so evenly across the spectrum; that is, they are of Neutral Density. Solar Filters are made of aluminised Mylar, a coated plastic. As long as these Mylar filters are not damaged, without creases or pinholes, they are safe to look through.

Observing directly at the photosphere of the Sun (the bright disk of the Sun itself), even for just a few seconds, can cause permanent damage to the retina. This damage can result in impairment of vision, up to and including blindness. Viewing the Sun during partial and annular eclipses require special eye protection or indirect viewing methods. The Sun’s disk can be viewed using appropriate filtration to block the detrimental part of the Sun’s radiation. Sunglasses do not make viewing the Sun safe. Only properly designed and certified solar filters should be used.

Sky is not the limit for Excel Public School Observatory

Astronomical Observatory of Excel Public School in Hootagalli has been active since ten years and was inaugurated in 2009, during the opportune moment of ‘International Year of Astronomy’.  The school has installed state-of-the-art 14-inch CGE PRO XLT Starbright Equatorial Mount Celestron GOTO Schmidt Cassegrain telescope with focal length of 3910 mm/ F11.

The 14-inch observatory class computer-operated telescope is a fully multi-coated Schmidt — Cassegrain telescope with multi-coated Plossl eyepieces accessory, which is a very high resolution powered instrument just perfect to see very faint celestial objects up to 14 magnitudes. It has the light gathering power of 2,560 times the naked eye limit.

The 8-inch Altazimuth CPC 800 GPS integrated telescope being smaller and more portable with focal length of 2032 mm/F10 is quite powerful and has the light gathering power of 850 times the naked eye limit. Both the telescopes can be mounted on a super sturdy steel tripods and dampers and preloaded with 40,000 objects in its memory, like NGC, Caldwell, IC, Messier and Abel catalogues. With plenty of interchangeable lenses to go with, the sky is not the limit and with magnification extending more than 400 times, objects such as galaxies as far as millions of light years is clearly visible.

Astronomical Observatory of Sri Ramakrishna Vidyashala has been active over three decades in observing the sky effortlessly. The Astronomy section of the School has two reflecting telescopes — Celestron 8’’ and Celestron 14’’. Both the telescopes have Celestron’s acclaimed Schmidt — Cassegrains optical system. The Celestron 8’’ is a portable telescope, but Celestron 14” has a computer module housed in an observatory.

The Celestron Compustar 14” is a computer-controlled reflecting telescope where the computer is controlled by an Intel 8052, 12 MHz microprocessor. The Compustar Computer displays the co-ordinates, type, magnitude, size and visual quality of each astronomical object being observed.

It incorporates Celestron’s acclaimed Schmidt — Cassegrain optical system. The system has three elements — the Schmidt corrector, a concave primary mirror and a convex secondary mirror. The corrector plate lens looks like a flat window at the front of the telescope.

The curved concave primary mirror is situated at the back, and fastened to the centre of the Schmidt corrector plate is the secondary convex mirror which faces the primary mirror. The rugged heavy duty castings used for mechanical components provide vibration free performance.

Note:  Sri Ramakrishna Vidyashala authorities are not organising any event for the Annular Solar Eclipse on Dec. 26 as the School is reconstructing the Observatory facility.

A perfect night vision at University of Mysore Observatory

The University of Mysore (UoM) has installed a big telescope for the study of Cosmology. The Department of Physics has raised a dome with a steel structure and an automatic motor-controlled rotating facility on the cover of the dome at a cost of Rs. 16 lakh.

Once aligned, the remote hand control allows direct access to each of the celestial catalogues in its remarkably user-friendly database. The CPC’s database contains more than 40,000 celestial objects, including the Caldwell Catalogue, as well as NGC galaxies, nebulae and planets.

User-definable filter limits make navigating through this expansive database quicker and easier. There is also upgradation facility with this telescope. This telescope includes NexRemote software, enabling one to operate it remotely from a computer. It also offers speech support, allows creating and saving custom tours and uses night vision mode to preserve night shots.

Note: The UoM Physics Department too is organising sky-gazing on Dec. 26. Interested may contact Prof. Chandrashekar on Mob: 94486-00121.

Mysore Science Foundation (MSF) has planned for observation of annular solar eclipse on Dec. 26 at Kutta in Virajpet Taluk of Kodagu district. Nearly 2,000 children and general public will witness the rare event.

MSF has joined hands with Mitee in Pune. On this occasion, occurrence of eclipses, types of eclipse, science behind eclipse, myths and misconceptions, eclipse watching and safety shall be explained.

Additionally, hands-on activities like pinhole camera, ball and mirror activity for eclipse observation, demonstration of image projection and making simple barometer and anemometer for the purpose of pressure and wind measurement shall also be taught. This association will arrange specially tested solar goggles.

NOTE: At Mysuru, the best viewing location is Chamundi Hill using properly designed and certified solar filters. So, do not forget to witness the solar eclipse on Dec. 26. Enjoy the rare celestial feast.

About the Author: Dr. S. A. Mohan Krishna, Observational Astronomer, is working as an Associate Professor, Department of Mechanical Engineering at Vidyavardhaka College of Engineering (VVCE), Mysuru.