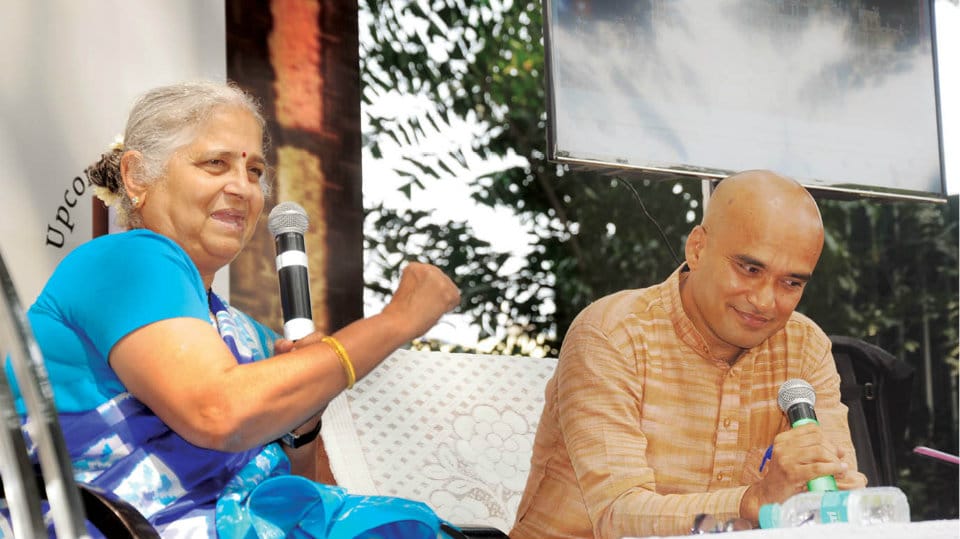 Mysuru: “Three major problems India faces are lack of education, good health and pride in the nation and all the three have to be tackled in equal measure to see progress,” said writer and Infosys Chairperson Sudha Murty.

She was reacting to a question from another writer Vasudendra who was in lively conversation with her at the sylvan surroundings of Wind Chimes in Nazarbad today where ‘a morning with Sudha Murty’ was organised by Mysore Literature Forum Charitable Trust and Mysore Book Clubs 2015.

People are not aware how big a problem education is as the most important aspirations of youngsters including people living in the villages was jobs. “If people have to get jobs then what is essential is more skilled people and this can come only if they are educated and have communication skills. This is the population which we have to harness for India to develop,” Sudha Murty said.

About health, she said that she might be biased towards it as her father was a doctor and an honest one at that. “But for people to stay healthy, they should understand its importance and have knowledge to prevent diseases from attacking them. For instance, they should understand the harmful effects of sewage water mixing with clean water,” she said. Awareness and precaution can create a healthy country, she added.

Regarding the third problem — pride in one’s country, heritage and language — Sudha Murty was categorical in saying that it should come from within as otherwise it would not have any effect.

She regretted that many Kannadigas were not proud of their language and most of the times she would notice especially in Bengaluru that though two people knew Kannada they were conversing in English.

“If people can read Shakespeare’s Hamlet there is no harm in it but they should also read Kalidasa to understand the rich Kannada literature. It was my son Rohan Murthy who told me how the wealth of Sanskrit literature is much greater than that of Greek and Latin literature put together,” she said. 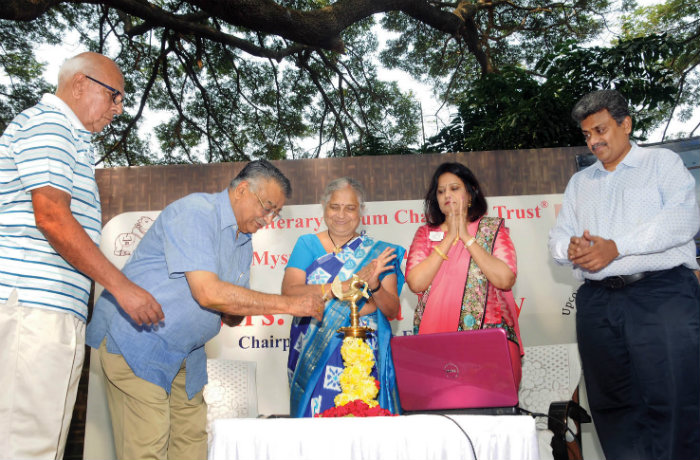 When Vasudendra pointed out to her that she had broken many barriers like sporting a bob cut, wearing pants, doing engineering and if she still faced any barriers, Sudha Murty said in the past when she was young and as a woman there were many barriers. But girls today are far more independent as they had economic freedom, she added.

However, the problem girls face today is to how to harness the economic freedom they enjoy. “I was told by a friend that when a girl goes to a boy’s house to find a match she wants to know whether there are old cots in the house, which literally translates to whether the boy has parents living with him. And this is not power of economic freedom. A true power for a girl is when she makes everyone happy at home,” she said.

She also spoke at length about her experience of working with Devadasis and how Infosys Foundation had been able to transform 3,000 of them by bringing them back to the mainstream.

On the question of giving and how she assessed when she gave money, Sudha Murty said that it all came from experience. “70 per cent of the time is spent in verification of people who come asking for help and 30 per cent time is spent in execution. For instance, one person came and told me how beautiful I looked and I told her but Narayana Murthy has not told me this even once. So I am careful in listening to sob stories. When I was young I used to get angry but have mellowed down with age,” she said.

She said that Infosys Foundation had so far built 60,000 libraries about 10,000 toilets and 2,300 houses. She also recalled how she had grown up in a secular atmosphere in her village when a Peer Saab, Yellammana Jogti and Guru Sidda all came seeking alms and neither did the giver had an ego nor the taker a sense of disdain. 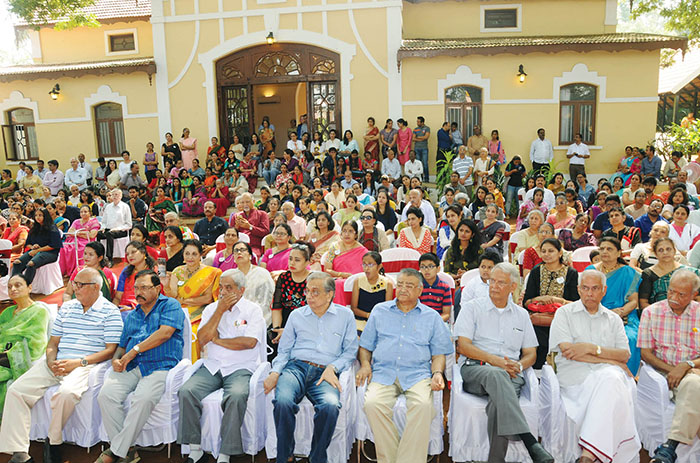 A section of audience including Prof. Chandy, SOM Columnist N.K.A. Ballal, Ashvini Ranajn of Pratham Mysore and Dr. Bhamy V. Shenoy of MGP at the interaction with Sudha Murty.

It was a packed house as literally the who is who of Mysuru were present to listen to the conversation between Sudha Murty and Vasudendra which was peppered with a lot of humour. An interaction followed the conversation.