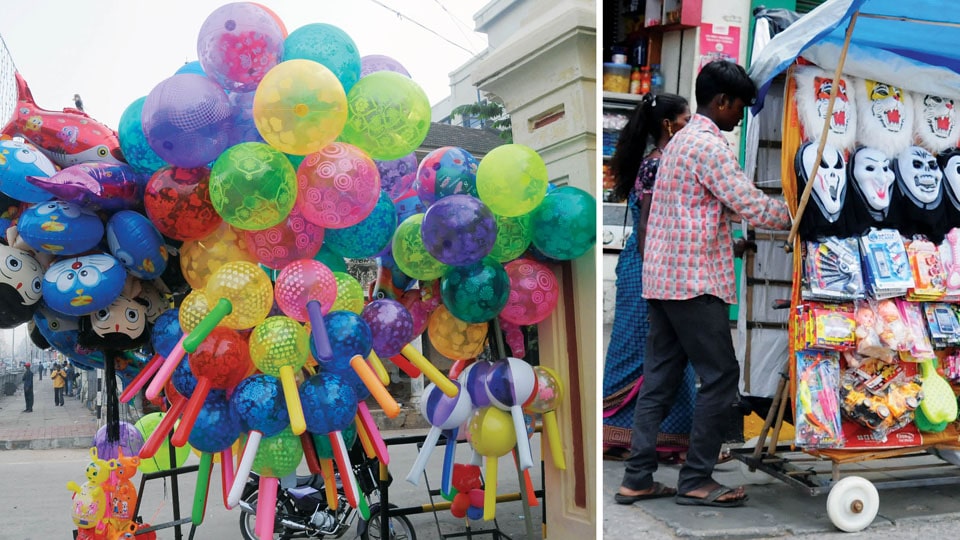 Mysuru: Michael Faraday, a British Chemist and Physicist, invented the first balloon in 1924 and since then balloons have managed to amuse and entertain adults and children alike. Children love to play with balloons because of its bouncy feature.

A balloon is a source of fun and joy as long as it lasts — whether it is a birthday party, a prom or a school dance, balloons are always used to engage and entertain children.

Go to any street in the Central Business District Area of the city now and invariably you will see a balloon seller displaying his colourful collections. The concentration of these vendors is around the Mysore Palace, Exhibition Grounds, City and Sub-Urban Bus Stands, Sayyaji Rao and D. Devaraja Urs Roads.

Over 600 vendors selling balloons, plastic toys and other articles have arrived from various parts of the country and seem to have invaded the city streets. The historic event is not only attracting visitors in lakhs but also has created job opportunities for various business people, hoteliers, traders, shopkeepers, taxi, auto and cab operators including hundreds of street vendors. These balloon sellers have arrived from far-off places like Rajasthan, Uttar Pradesh, Bihar and West Bengal. Apart from them, several families from Gulbarga district of Karnataka too have arrived to make some fast bucks during Dasara. 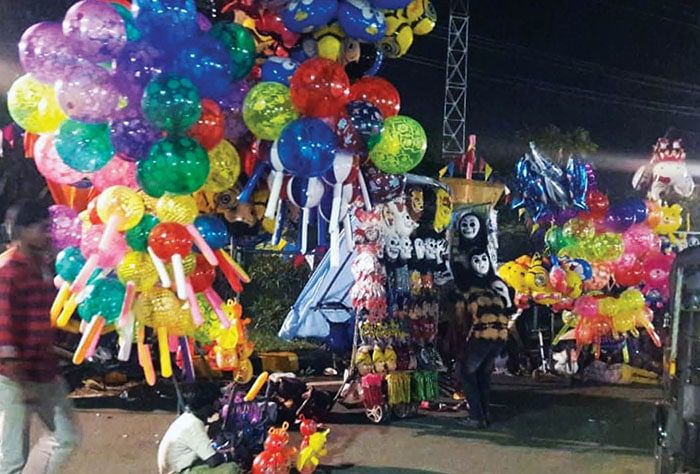 These balloon and toy sellers can be seen at the entrance of most happening venues like Dasara Ahara Mela, Flower Show, Dasara Exhibition Grounds, outside Mysore Palace, Town Hall, Circus and other carnival-atmosphere events.

Other than these, they are also selling bubble-emitting plastic toys, customised bundles, those with special characters, alphabet foil balloons, masks, toys, birthday and party  balloons, latex balloons, inflatable helium car, plane, Angry Bird, heart-shaped inflated helium balloons, high-quality aluminium toys, animals shaped balloons and illuminated devil horns. All these toys are bound to attract the attention of children who pester their parents  to buy them. What more, these balloons and attractive toys are available for just Rs. 10 to a maximum of Rs. 100.

Speaking to Star of Mysore, Labhuram, a street balloon seller from Rajasthan, said that he has been engaged in this business from the last 10 years. He said that he and some of his friends have been visiting Mysuru every year for Dasara so that they can make brisk business. 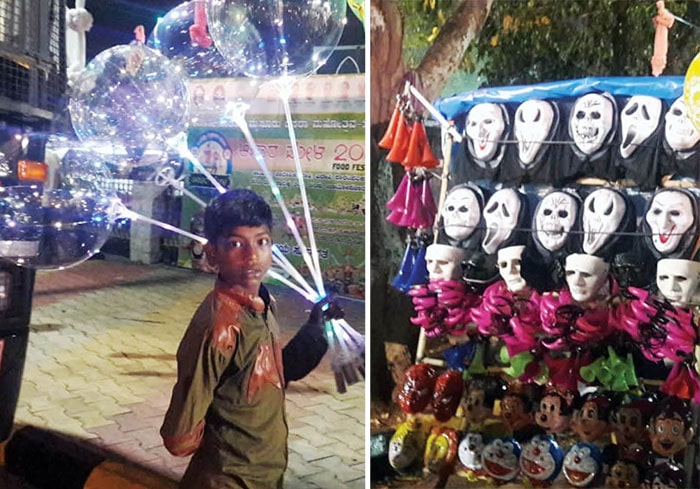 “I normally earn a profit of Rs. 1,500 to Rs. 2,000 each day of Dasara and return to my native place after the festival. The festival not only provides an opportunity to earn some money for hundreds of youths like me from North India, it also enables us to view the magnificent beauty of Mysuru.”

Labhuram said that they buy large stocks of these balloons from markets in Mumbai and Hyderabad when the prices are low and during off-seasons and sell them in Mysuru after keeping a small profit margin.

Basavaraj, another balloon seller of Shahapur Taluk of Gulbarga District said that over 30 families from his district are engaged in this business in Mysuru from the last sixteen years. “This is my eighth visit to city and Dasara is a great opportunity for people like me to eke out  a living,” he said.

The balloon sellers are camping in makeshift tents at open fields near Mysuru Zoo. Their work starts at around 9 am which goes on till midnight. Sometimes, have to walk all the way to their temporary sheds  after a tiring day.