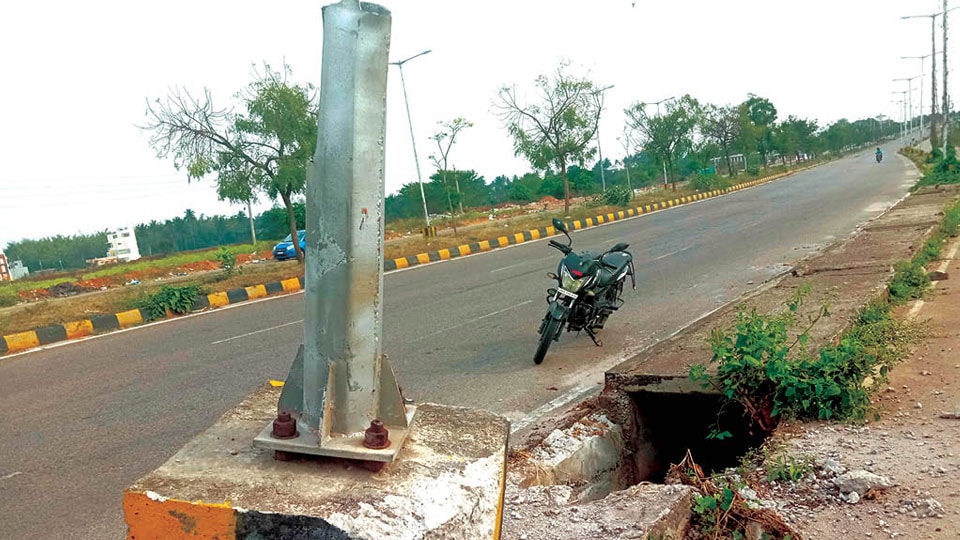 Mysore/Mysuru: Apart from footing the electricity bill and maintaining streetlights along the six-lane 42-km Outer Ring Road (ORR), Mysuru Urban Development Authority (MUDA) has a new headache — stolen electricity poles. Yes. Miscreants are stealing the metal poles and are carrying them away in vehicles, hoodwinking both MUDA officials and Police, who often come on the ORR, patrolling.

While some of the electricity poles have fallen off due to wind, others are deliberately cut and taken away after a strong wind bends the pole. Some of the poles fall off after a speeding vehicle collides against them like it has happened to the poles near University of Mysore Employees Association Layout. There are two poles that have crashed onto the ground after speeding vehicles collided against them.

Residents of the area have urged MUDA to restore the poles before they are taken away by thieves. The ORR has over 2,135 electricity poles and safeguarding them is a big task, or call it a headache, for MUDA.

Area residents have stated that from the University of Mysore Employees Association Layout till Parasayyanahundi there were at least four to five fallen electricity poles. Neither MUDA nor Chamundeshwari Electricity Supply Corporation (CESC) officials bothered about them, they said. These metal pipes, though scrap in the eyes of a layman, it is money when sold to metal dealers or scrapyards. The metal used for an electric pole is usually strong and weighs more when dismantled and cut into pieces. Crores of rupees have been spent on the road and the electrification. Sadly, public money is being wasted and no officer is bothered, residents regretted.

MUDA Commissioner Dr. D.B. Natesh has said that maintenance of streetlights along the ORR was MUDA’s responsibility. “I will direct officials to take steps and safeguard public property,” he said.