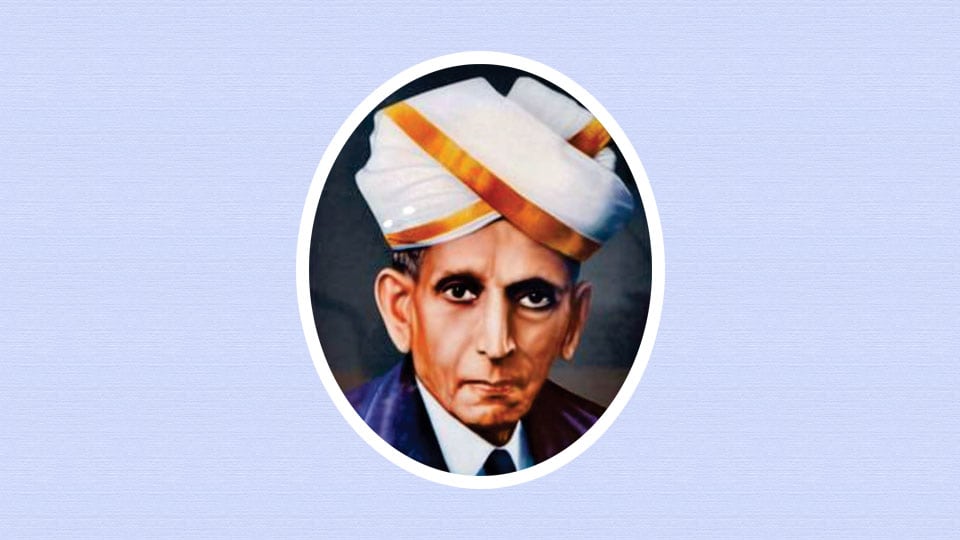 At the present juncture India suffers from crisis of values that has distorted our outlook impacting in all spheres of activities. September 15 is celebrated as Engineer’s Day all over India to commemorate the birthday of Sir M. Visvesvaraya (MV), Engineer-Statesman of the then Mysore State.

He was a man of sterling values and all his life he lived by it.  Sir MV worked as Chief Engineer and Dewan of Mysore during the reign of  Maharaja Krishnaraja Wadiyar whom Mahatma Gandhi called as Rajarishi. It was the unique combination that saw the then Mysore State becoming a Model State in India and the period is called the Golden era.

Recognising  his contribution to society, the Government of India awarded him the highest civilian honour of Bharat Ratna in 1955. Therefore, it is opportune that on this day, today, not only engineers but also the people of India in general should emulate his value system.

Following are some of the incidents in Sir MV’s life  that will best convey his value system so that it may help us to imbibe them to bring reformation in the society.

Pandit Jawaharlal Nehru, the first Prime Minister of India, requested Sir MV to give a report for construction of a bridge across Ganga in Patna.

Sir MV wrote to the PM saying that already seven previous reports are gathering dust in the Secretariat and he did not want the eighth report to share the same fate.

The PM sent C. Rajagopala-chari as his personal emissary to assure that the Government would take action within 6 months of his report. That is how Mokama bridge became a reality.

Fame did not enslave him

When Sir MV was conferred Bharat Ratna in 1955 he wrote to Pt. Jawaharlal Nehru that conferring the title or honour will not deter him in criticising any idea of the Government that he did not agree with.

Cleanliness as his religion

Sir MV was not a religious man in the sense it is understood. It is said that he never entered a temple but was particular  of keeping the premises scrupulously clean.

Once one of his dear friends suggested that he should pay a visit to the world famous Tirupathi temple. Sir MV was reported to have said that God has already told him what to do and he did not wish to waste God’s time by visiting him.

Once Dr. Rajendra Prasad, the first President of India, invited Sir MV to Patna for drawing up a blueprint for development of Bihar. All arrangements were made for his stay in Raj Bhavan as State Guest. Rajendra Prasad instructed the inmates to attend to Sir MV’s needs. After a few days when Rajendra Prasad came to Raj Bhavan he was surprised to be informed that Sir MV was not in the Raj Bhavan.

He anxiously enquired whether there was any lapse in looking after him. However, this is what he learnt. Soon after Rajendra Prasad left, Sir MV asked for the rules  governing the stay of State Guests. He was informed that as per rules framed by the erstwhile British still extent, the maximum period of stay was three days. Rajendra Prasad was informed that after three days of stay in Raj Bhavan MV shifted to a hotel where he was found to be working on the report.

As for as his personal habit of honesty, integrity, dedication to task assigned, attending to details, time consciousness, neatness in dress, punctuality etc., are nothing short of legendary. His strict regimen of time management for various activities, getting up at 6 am and retiring to bed at 10 pm coupled with regular walk blessed him with excellent health and seldom fell ill.

When one of his friends asked the secret of his longevity he is reported to have said that death came calling at his house and did not find him for he had gone for a walk !

PS: The above are the anecdotes narrated by the chief guests invited to Institution of Engineers, Mysuru, during Engineer’s Day celebration. These days that culture has disappeared.