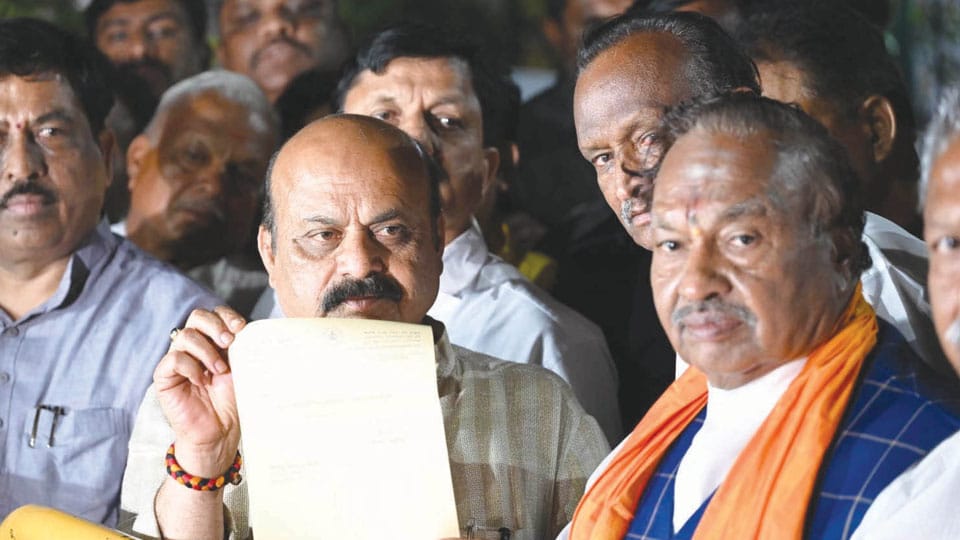 Bengaluru: After three days of uncertainty, RDPR Minister K.S. Eshwarappa, who is in the thick of the row over his role in the suicide of Belagavi- based contractor Santosh Patil, submitted his resignation to Chief Minister Basavaraj Bommai here on Friday.

Even as Eshwarappa submitted his resignation to the CM at the latter’s official residence, crowds of his supporters gathered outside the CM’s residence and shouted slogans opposing his resignation. They also shouted slogans against Congress leaders who had sought Eshwarappa’s resignation and are also demanding his arrest over his role in the death of Santosh Patil, who before his death, had in a WhatsApp message, alleged that the Minister demanded 40 percent commission for sanctioning of bills.

Eshwarappa is the third Minister in the BJP Government  to resign since 2019 when the party Government was formed. While Gokak MLA Ramesh Jarkiholi, who was Water Resources Minister, quit Yediyurappa headed Ministry in Mar. 2021 over his alleged involvement in a sexual harassment case, Excise Minister H. Nagesh, an Independent MLA from Mulbagal in Kolar, quit in Jan. 2021 over alleged corruption charges. However, Nagesh was later appointed as Chairman of Dr. B.R. Ambedkar  Development Corporation.

Earlier in the day on Friday, high drama prevailed at Shivamogga, the hometown of Eshwarappa. Before leaving Shivamogga, the Constituency which he represents, Eshwarappa told BJP party workers and supporters that he would soon emerge unscathed in the probe on corruption charges and become a Minister again. On his way to Bengaluru, he met Primary and Secondary Education Minister B.C. Nagesh at Tiptur and visited the famed Siddaganga Mutt at Tumakuru, where he sought the blessings of the Seer.

Speaking to presspersons after tendering his one-line resignation letter to CM Bommai at Bengaluru, Eshwarappa maintained that he has set a new benchmark in the party to ensure that leaders with any taint will not continue in power. Contending that the allegations against him were far from truth, he urged the Chief Minister to order a thorough probe into the matter.

Meanwhile, CM Bommai said that RDPR Minister K.S. Eshwarappa resigned on his own. Noting that Eshwarappa is confident of coming out clean over corruption and bribe charges, the CM countered allegations of Congress leaders. Asserting that there is no need for the Congress leaders to become Investigation Officers, Judges and Prosecutors in the case, he announced that there will be an open enquiry and the truth will come out soon.

The Congress, which has been  vociferously demanding the Minister’s resignation and also his arrest on corruption and abetment to suicide charges, for the past three days, has announced State-wide protests today, calling for immediate arrest of Eshwarappa. Not satisfied with only the resignation of Eshwarappa, the Congress plans to go all-out against the BJP Government seeking the arrest of the senior BJP leader and also what it alleged rampant  corruption in the Government.

As Congress kept up its pressure on the Government over Eswharappa issue, senior JD(S) leader and former Minister H.D. Revanna has urged the Congress leaders to speak about cuts, percentage and other corruption charges when the Congress Government was in power.

Speaking to pressperons at Hassan on Friday, Revanna wanted the Congress leaders to introspect on their own corrupt acts when they were in power. Pointing out that a thorough probe will unearth the truth in Santosh Patil suicide case, Revanna sought compensation to Patil’s family, if indeed he had executed works without a work order.