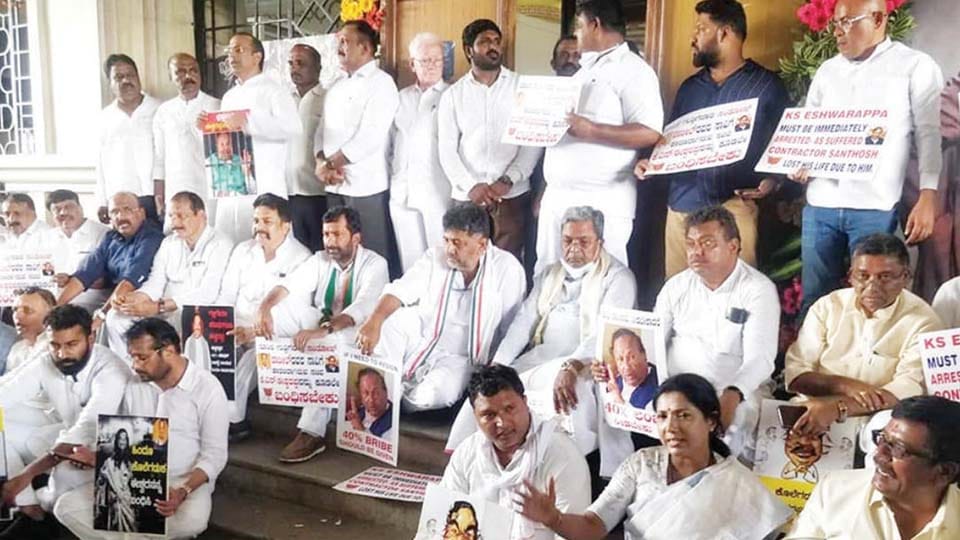 Resignation finally after days of defiance: Eshwarappa to meet CM at 7 pm

Bengaluru: Rural Development and Panchayat Raj Minister and senior BJP leader K.S. Eshwarappa, who is facing charges of abetment to suicide in connection with the death of Santosh Patil, a civil contractor in Udupi, will be stepping down from his post in the State Cabinet this evening, ending days of defiance.

Reports from Shivamogga said that Eshwarappa is expected to hand over the resignation letter to Chief Minister Basavaraj Bommai at the CM’s residence at R.T. Nagar in Bengaluru at 7 pm. The CM, who is on Hubballi tour, will return to Bengaluru at 6 pm.

Though he is resigning under pressure, Eshwarappa will put up a brave face and he will travel to Bengaluru by road. He will demand the CM to order an investigation to bring out certain ‘unseen hands’ in the suicide case.

During his meeting with the CM, Eshwarappa will be accompanied by his son and former Zilla Panchayat member K.E. Kanthesh. Eshwarappa is grooming Kanthesh to be his political successor. Before leaving for Bengaluru, Eshwarappa will visit the party office in Shivamogga where he will address the party workers.

CM Basavaraj Bommai has clarified that Eshwarappa decided to resign on his own and there was no pressure from the party high command.

Meanwhile, the Congress has called for Eshwarappa’s arrest, saying that resignation was not enough. “Resignation is not a solution. A case of corruption has to be registered, and then he has to be arrested,” Karnataka Pradesh Congress Committee (KPCC) President D.K. Shivakumar said.

Reacting to this, CM Bommai said, “Congress can’t be the judge, jury and executioner. Was K.J. George arrested by the Karnataka Police or the CBI after Dy.SP M.K. Ganapathy committed suicide? Police will take a call after their investigation.”

READ ALSO  Defiant Eshwarappa to go ahead with Rayanna meets

4 COMMENTS ON THIS POST To “Resignation finally after days of defiance: Eshwarappa to meet CM at 7 pm”