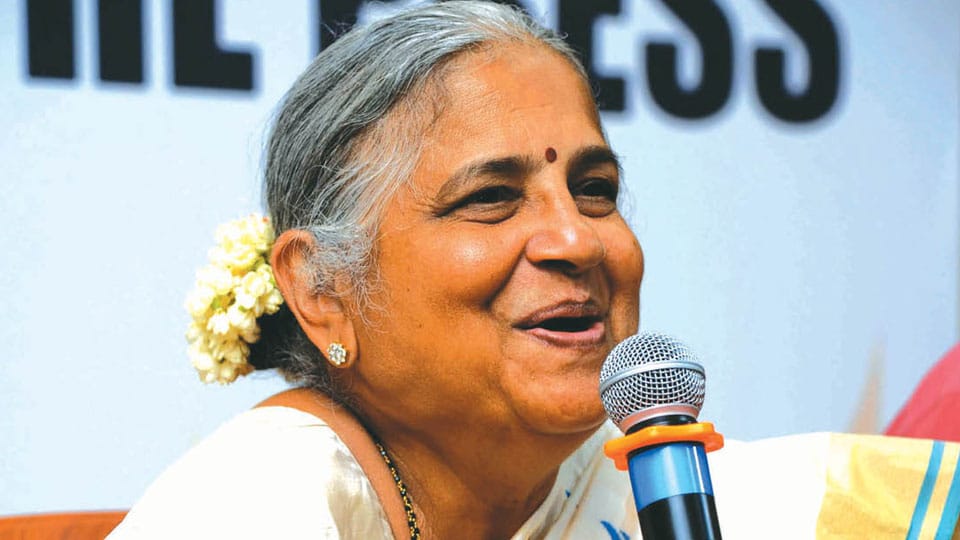 When I first learnt of the Chairperson of Infosys Foundation Dr. Sudha Murty’s choice to inaugurate this year’s Dasara festival, I was delighted. She would go to the Chamundeshwari Temple atop the Hill, offer prayers and inaugurate the 10-day festival amidst religious fervour. Yesterday she successfully performed this service to the Goddess and the people of Karnataka — this being a Naada Habba.

I have been observing her public service and creative outpouring by way of books and essays in English and Kannada for many years now. R.K. Narayan and Sudha Murty are two favourite writers of my wife. Hence, there is frequent discussion in the family about these two authors. Otherwise how would I know that Sudha Murty gave up shopping for sarees, which was her obsession, after visiting Varanasi? As we know, it is the tradition and also a belief that on visiting the Holy place one should give up what is most dear to a person. Since she loved shopping, she gave up shopping thereafter. Hope, she has not returned to her old habit. After all, old habits die hard!

I find from my 40 years experience that there were only a few, if at all, dissenters about the choice of the chief guest for Dasara. The dissenters are usually from among the ‘Rationalists’ and ‘Secularists,’ the keepers of the Idea of India! Happily and understandably, this year’s choice was received with great deference from all sections of the people. She has name and fame as an accomplished author and social worker, academically highly qualified — BE, IISc., and M.Tech with gold ! As the Chairperson of Infosys Foundation, she is a great philanthropist. A good cause never goes without the touch of her helping hand. With such a personality, our presiding deity Goddess Chamundeshwari had no problem of gender or age as with Ayyappa Swamy of Sabarimala in Kerala.

In the past five years of Siddharamaiah’s rule as Chief Minister of Karnataka, he managed to get non-controversial persons to inaugurate this festival, but his choice of self-proclaimed # MeToo Urban Naxal, Girish Karnad, did attract controversy in 2014. However, we must admire Siddharamaiah for getting Prof. Nissar Ahmed, the renowned Kannada poet, a Muslim, to inaugurate the festival last year. For once, I thought India has a great future as a Secular country. If only all minorities in India (with Hindu majority) are like Prof. Nissar Ahmed, a practising Muslim, who gets into the mainstream of a Hindu majority country without any personal problem, India is sure to remain a true Secular country, not a pseudo-Secular one as it is now.

Curiously, the BJP which made much noise during Siddharamaiah’s rule for not choosing Dr. S.L. Bhyrappa, perceived to be a right-wing thinker, to inaugurate Dasara festival, had itself forgotten Dr. Bhyrappa during BJP’s rule of five years from 2008 to 2013. Its choice fell only on religious heads — Seer of Siddaganga Mutt, Dr. Shivakumara Swamiji, 2008; Sri Sri Ravishankar of Art of Living Foundation, 2009; Dharmasthala Dharmadhikari Dr. Veerendra Heggade, 2010; Sri Vishwesha Theertha Swamiji of Pejawar Mutt, Udupi, 2011; Sri Siddeshwara Swamiji, 2012.

Surprisingly, Dr. Bhyrappa, who is often seen in BJP or right-wing functions, has benignly kept silent about this denial. In fact, I had a gut feeling that if in the 2018 Assembly election, Siddharamaiah had romped home to power, he would have put the BJP to shame by inviting Dr. Bhyrappa to inaugurate Dasara. Let it be.

Now to revert to Dr. Sudha Murty, she does not seem to have produced any base metal in her life at all. Gold is her metal. Wonder if she is an Alchemist. Well, metaphysically speaking she seems like one. Whatever she touches becomes gold. A positive Midas touch. She says she published her first book in english at the age of 53 though she had written one in Kannada in 1979 after visiting America with a back-pack alone when young and, I suppose, unmarried. I was reminded of Nirad C. Chaudhuri, who wrote his first book, ‘An Autobiography of an Unknown Indian’ at the age of 54 and became very famous in the world of english literature thereafter. Well, for a genius to bloom age is no bar. She admits that she was no good in writing books in english until the veteran journalist and author TJS George of Indian Express found potential in her and advised her to write in english.

Yesterday morning I was listening to an interview Dr. Sudha Murty gave to Mr. Abdul Rasheed of Mysore Akashvani after inaugurating the Dasara festival. It was simply beautiful. So beautiful and full of life’s lessons I and my wife stayed glued to the transistor till the end. Being a gifted anchor of great talent and also an interviewer, Mr. Abdul Rasheed was able to draw out all that is wise and otherwise from her life experience. Every answer was a nugget. In its philosophical content it made me remember Marcus Aurelius the Roman Emperor-Philosopher and his famous book ‘Meditations’. Without sounding rhetorical or pedagogical nor like delivering a sermon from Akashvani studio, pearls of wisdom were rolling out of her lips. Here are some pearls I picked up and put in my mind’s jewel box.

When asked what would be her message to our daughters who are facing problems including sexual assault, Dr. Sudha Murty had this to say:

“I would like to tell the girls that they have in them a great strength. Unfortunately, they are not aware of it. Some girls think because they are female they are weak, but I tell them they have more capacity than men. God has created them that way. A female child plays many roles — a daughter, wife, mother. They should not spend their time in fear and thereby miss the purpose of life. They should have self-confidence and grab the opportunities they get. They must develop certain skills to get jobs and try to learn something new every day.”

To another question as to how a girl-child could become a creative writer like herself, Dr. Sudha Murty said that it should begin with the habit of reading books. We have to find out for ourselves what we should become in life. This cannot be told to you either by your husband, mother-in-law or father-in-law. Not even your sister or friends could tell you what you should become in your life. “I am the master of my life” should be the inner voice of every grown up girl. You are your own best friend and also your worst enemy. This must be realised by every girl, said Sudha Murty.

Later, at the breakfast table I began to reflect on this interview and did a bit of cud-chewing. India had many Presidents since Independence beginning with Dr. Rajendra Prasad, a politician-intellectual. Then we had  Dr. S. Radhakrishnan, a Philosopher-Statesman and another like him in Dr. Zakir Husain. How can we forget                         Dr. APJ Abdul Kalam? There were also some who enjoyed the position without leaving behind any mark or legacy.

And then, as if to atone for the sins, our politicians who could not bring in the much-touted and still pending Women’s Reservation Bill in the Parliament, elected Mrs. Pratibha Devisingh Patil, a veteran Maharashtra politician, as the first woman President of India. A rubber-stamp President no doubt like some of her predecessors.

The next Presidential election will be in July 2022 when the present incumbent Mr. Ram Nath Kovind completes his five-year term. And once again as a penance for not passing the Women’s Reservation Bill yet and to atone for the failure, why not elect Dr. Sudha Murty as our President? She would make a great President. Her public speeches would be similar to what we heard from Dr. APJ Abdul Kalam with the same social and humanitarian concerns that he displayed while in Office and even after demitting the Office.

Let our politicians of right, left and centrist political parties think about it because Dr. Sudha Murty is my Idea of a Secular India. Jai Hind.

ABRACADABRA K.B. Ganapathy Sudha Murty
A sauna of wisdom, the need of the hour
‘Hindi Week’ celebrated at AIISH