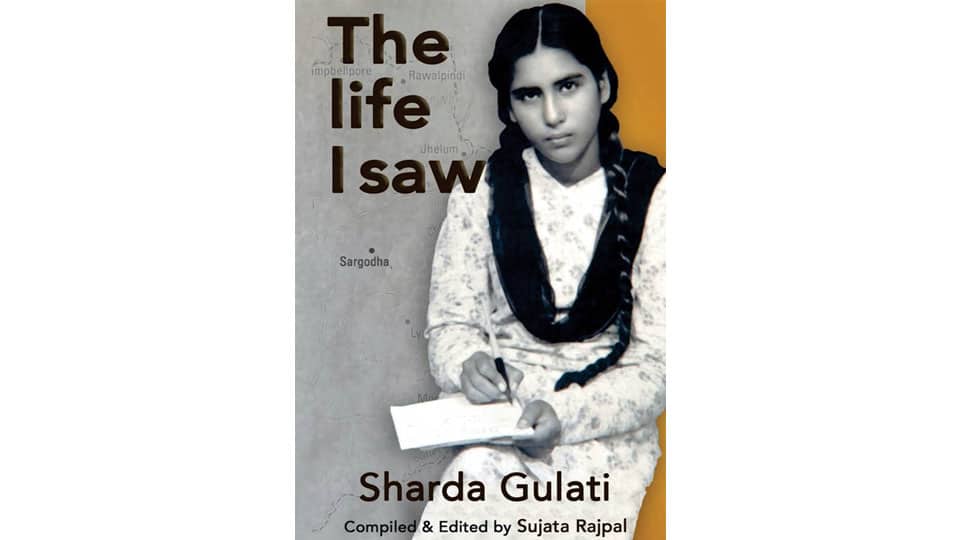 A month back Sujata Rajpal, writer and a home-maker who contributes articles and interviews of VIPs for Star of Mysore, gave me a book of modest size, in English of course, saying ‘read it and let me know.’ So here I am.

The book ‘The Life I Saw’ is an autobiography of a Punjabi lady Sharda Gulati, migrated to Indian side of divided Punjab from Pakistan side. And she was fortunate to be the daughter of an MLA of Sargodha of undivided Punjab. The advantage could be seen in the book where her crossing the border was safe and smooth compared to what I have read about the partition and the horrors of looting, rape and killings of millions of people — one may read the best-seller book ‘Freedom At Midnight’ by Larry Collins and Dominique Lapierre to learn about the biggest mass slaughter in the history of the world. Many books were written so also novels based on the partition like Khushwant Singh’s ‘Train to Pakistan.’

Another book that partly dealt with partition I read was ‘Beyond the Lines’, the autobiography of the famous journalist-columnist Kuldeep Nayyar. He writes about the difficulties and betrayal suffered by his family and friends following partition while crossing over to India from Pakistan side where they were living for centuries.

I did not find Sharda Gulati or her father facing that kind of danger, risk, betrayal or difficulties in crossing the border and thereafter. In fact,  her father became a Minister in the truncated Punjab. As such the autobiography makes a straightforward reading of a person’s life and career in Government service — a smooth family journey of schooling, Government job, marriage, raising children (three daughters including Sujata Rajpal), retirement, old age…life goes on for her. The life she saw was a good life as recorded in the book. There is not much for a reader to get sympathetic, emotional or ecstatic about events and situations the author narrates.

However, the book is a treasure house of information about what life was in undivided Punjab with Hindus, Sikhs, Muslims and Christians living peacefully individually or as a community.

Reading about this aspect of life described in the book I was wondering, ‘hell, if that was the good, harmonious life they were leading, what was the heavenly purpose of this division and migration on the basis of religion?’

The book opens with a chapter titled, ‘My Childhood’ and mentions of a ‘filmi drama’ following author’s birth. She had two sisters and those times having daughters was a curse for parents. Well, no different, in most families, even now. Let it be.

The author Sharda Gulati writes that her father’s best friend was Ram Piara Lal, an advocate who had a son. Incidentally when Sharda’s mother was expecting her arrival to the family, Ram Piara Lal’s wife too was expecting her second child. It happened that their delivery dates were just about 12 hours apart.

However, Sharda’s father laughed, refusing the offer and took back the child (Sharda) saying: ‘I highly appreciate your sacrifice but it does not matter to me if I have a son or a daughter. Both are equal.’

Sharda Gulali writes: ‘When I think of  Ram Piara Lal, I wonder how could anyone sacrifice his most beloved possession for the sake of a friend. ‘I guess, which is why the saying ‘a friend in need is a friend indeed.’

Be that as it may, Sharda’s family is not only educated but has also made sacrifices for the freedom of the country, going to jail, facing hardship and denials as a result. But it is sad that the land, for the freedom of which he and his family fought and suffered, was not theirs’ anymore when the freedom really came. It went to Pakistan.

The author does her MA and gets a government job in the Public Relations Department of Punjab government — as she writes, courtesy the then Chief Minister of Punjab Sardar Partap Singh Kairon (Nehru’s favourite CM!). She joins as the District Publicity Supervisor. She never looks back and retires as DPRO (District Public Relations Officer). Her work experience here was similar to my friend K. Vijaykumar’s, who had retired as the Jt. Director of Information and Publicity, Government of Karnataka. Her journey, as I mentioned, continues with normal human problems along the way.

The book was compiled and edited by Sujata Rajpal, her daughter, a commendable effort. And then what is her message? Here it is at the end of the book:

“At 87, I feel the two most valued things in life are good health and strong family bonding. Both can’t be taken for granted, and need to be nurtured with patience, love and care.”

The book is a good read, specially to the Punjabi diaspora who have not seen, experienced or heard of what life and times were before and after Punjab’s division following independence.