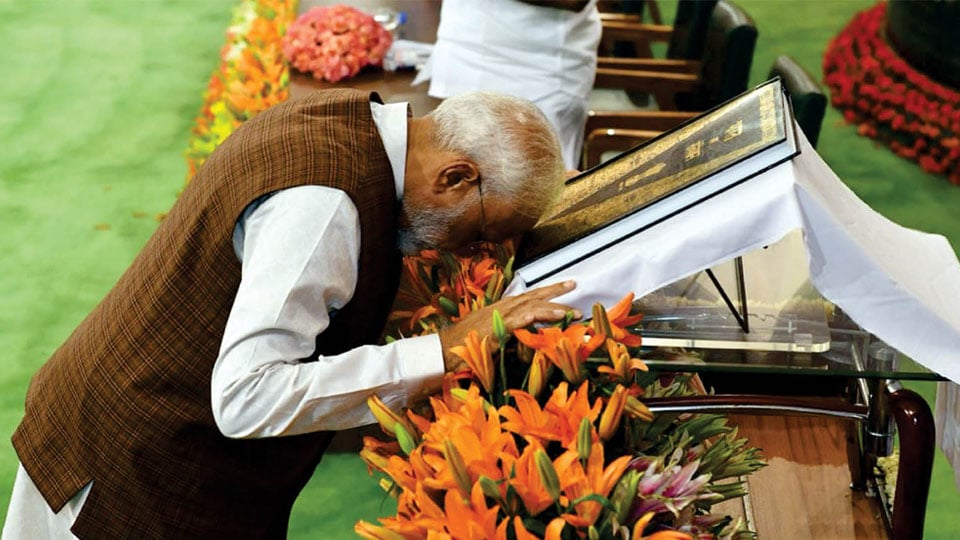 A few days back I was watching ‘UpFront,’  a programme of interview by Karan Thapar on Tiranga TV channel. For me, among all the TV interviewers of politicians, it is one and only interviewer Karan Thapar that I like and enjoy the best. It is also the only TV interview I watch till the end ensuring that I am not disturbed by any other activities around the TV during the period. Such is the impact of Karan Thapar’s presence on TV where an ordinary interviewee is made to sound extraordinary !

In contrast, he would make even a Military General meek and fumble for words. Be that as it may, a few days back I was watching Karan Thapar interviewing a Muslim politician, I am deliberately emphasising on the word Muslim, Arif Mohammad Khan. The main thrust of his theme for the interview was: How do India’s 175 million Muslims view Narendra Modi’s phenomenal victory?

Arif Mohammad Khan is considered one among India’s most outstanding Muslim politicians. He always made news, whether in the Union Ministry or out of it. To me, he appears to be an archetypal Indian politician, not necessarily a Muslim, because there is hardly any political party left to which he has not joined beginning with Bharatiya Kranti Dal. Probably, he was the youngest MLA of UP in 1977 at the age of 26.

He then joined the Indian National Congress and was elected to the Lok Sabha. He made news in Rajiv Gandhi’s Ministry which he quit over the issue of Shah Bano case and the Triple Talaq legislation, both of which pandered to the wishes of the Muslim fundamentalists. He later joined Janata Dal and became the Union Minister. Again, he left Janata Dal and joined the Bahujan Samaj Party (BSP) and entered Lok Sabha. And finally, to everybody’s surprise he joined the Bharatiya Janata Party (BJP), lost the Lok Sabha elections and quit the BJP in 2007.

So he is like a rolling stone having changed political parties five times. Presently, he seems to be at a loose end politically. I am sure if he had continued with BJP, he would have been a Union Minister for the second term. Why not? This interview reveals his outlook and thoughts as being almost compatible to that of the BJP.

Whatever might be his political ideology, if he really has one, Arif Mohammad Khan is highly regarded and respected by the enlightened Muslims as also the Hindu rightist groups because he has always supported the reformation within Muslims. He is also an author having written numerous books and considered as a good public speaker. Karan Thapar could not have chosen a better person than Arif Mohammad Khan for the interview at a time when the BJP is the “undisputed hegemon of Indian politics” to quote Karan Thapar’s words.

Karan Thapar’s first question was: Mr. Khan, let me start with the obvious question. How do you respond to the fact that today the BJP is the undisputed hegemon of Indian politics? It has 303 seats on its own. With its allies, it has 353, which is two-thirds majority. It controls 17 States and in 12 States, it has got over 50% of the votes.

Hearing this question, I said to myself: Boy, nobody asked this kind of question when Nehru, Indira Gandhi and Rajiv Gandhi were the ‘undisputed hegemons of Indian politics’ with as many or even more seats in the Lok Sabha on their own.

Khan’s response seemed to transcend the ordinary when he said: ‘People have voted the party into power, so where is the problem? Anybody can have problem with the Government but not with the people of India.’ He was making a clear intellectual distinction between the Government of India and the People of India. He then speaks of what was done in 1986 by the then Prime Minister  Rajiv Gandhi — first, Shah Bano, then within a week, the opening of locks at Ayodhya. According to Arif Mohammad Khan, this has created a situation where there would be more communalism, more animosity, more alienation even compared to the Partition of India.

Karan Thapar then asks if Arif Mohammad Khan thought BJP’s phenomenal success in the elections was due to the decisions taken in 1986 about Shah Bano case and opening of the Ayodhya locks. The answer was in recalling  what L.K. Advani had said: “If the Government had not taken the decision, which they had taken on Shah Bano case, there would have been no Ayodhya movement.” In retrospect, I too think that Ayodhya, which was only an issue became a movement as a pre-emptive measure to check-mate further pandering to the Muslim fundamentalists. Let it be.

Hearing this, I thought Rajiv Gandhi had done more damage to Hindu-Muslim peaceful co-existence than his predecessors in Office. Karan Thapar persisted with his question whether Arif Mohammad Khan was of the opinion that the decisions taken by the Rajiv Gandhi Government — Shah Bano issue and opening of locks at Ayodhya — strengthened the BJP and brought it to power with two-thirds majority today. Khan responded saying that it was not he (Khan) alone who was saying this, it is said by Prof. Bipan Chandra, Prof. Ramachandra Guha and Inder Malhotra in their respective books.

Karan Thapar then asks him about BJP getting a huge majority but not having a single Muslim MP in the Lok Sabha. He asks: “Does that worry you about the BJP?” The answer was no and explains it saying, under the Constitution it is not said only a Muslim should represent the Muslims and only a Hindu should represent the Hindus. The idea of separate electorate led to the Partition of India and that idea was buried under our Constitution. Khan said the problem (probably with people like Karan Thapar, members of the Lutyens’ Club and Khan Market Gang) is that “We have got rid of the colonial rule but we have not got rid of the colonial mindset.” An elected representative under the Constitution represents all the people of the Constituency, irrespective of any religion. Apparently, he means to say that there was nothing to worry even if there was not a single Muslim BJP MP in the Lok Sabha.

Karan Thapar then proceeds to ask about Arif Mohammad Khan’s feelings when BJP MLAs, MPs and even Ministers say things like: Muslims are responsible for rape and terror and they should go to Pakistan or Bangladesh. Khan simply says: “It is for them to explain. Who am I to comment on that? I believe in the Constitution of India.”

However, Karan Thapar looked  adamant to push his agenda when he asked: Except for the fact that when a BJP MP from UP says and I am quoting: ‘Muslims got India divided. What is the need for them to live in India. They should go either to Pakistan or Bangladesh. That is not in accordance with the Constitution.’

Arif Mohammad Khan apparently was a bit annoyed when he answered saying: “Do you think these things are very important? They really matter? And they deserve to be discussed in a national programme like this?”

Moving forward, Karan Thapar asked about “tens of millions of Muslims in India” feeling insecure and scared. “They believe that they have become second class citizens…” For this, Arif Mohammad Khan’s reply was: “That is your view point. I do not feel insecure.”

At one point, Arif Mohammad Khan becomes quite eloquent and a bit emotional when he answered a question about Prime Minister Narendra Modi’s speech assuring to protect the interests and progress of the minorities on the day he got elected as the NDA leader. This is what Arif Mohammad Khan said:

Finally, Karan Thapar asks his last question: What would be your advise to tens of millions of Muslims in India who are scared because Modi has got a huge majority?

Arif Mohammad Khan, the wise man who thinks before he opens his lips, said he was not sure if it was right for him to advise one particular segment of the population. He said that he would say this to everybody: “…as Maulana Abul Kalam Azad had said from the steps of Jama Masjid on  Sept. 23, 1947… Nobody can drown you unless you drown yourself. Nobody can defeat you unless you defeat yourself. The moment you realise, you develop the confidence that this country is ours along with others… to build the country, we will regain that confidence.”

Arif Mohammad Khan’s  last words to Karan Thapar were quite interesting and let me quote: “It is not the Government which ultimately matters. It is the Constitution of India. And this Government, the Prime Minister, bowed before the Constitution continuously for more than a minute.”

Tailpiece: I was going through my scrapbook of many years. To my surprise, I ran into a statement made by Arif Mohammad Khan, the former Union Minister, which is as follows: “What I want is that the Government must govern and not behave like a shopkeeper ready to negotiate with gun-toting men.”

I do not know in which context Khan said this, but apparently, I must have thought it was a good quote and entered it in my scrapbook.