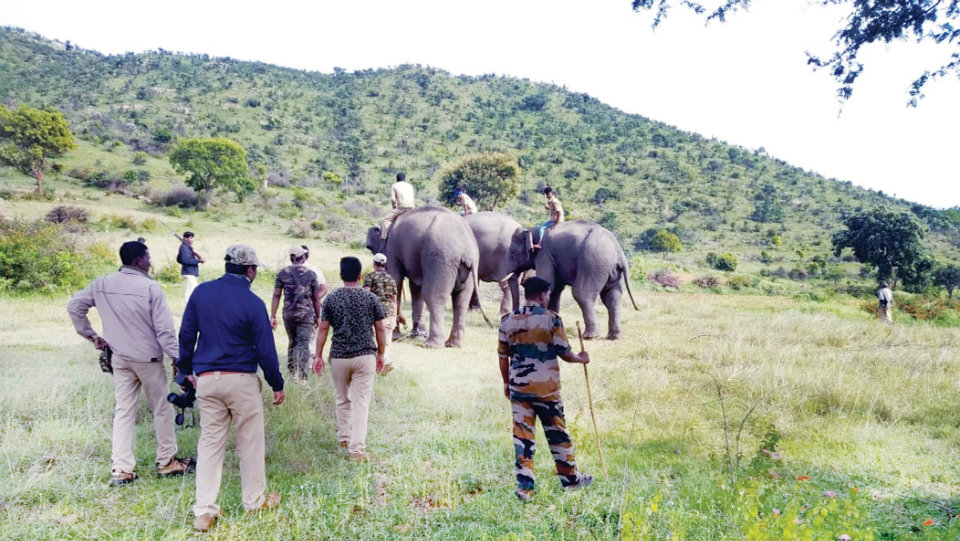 Mysore/Mysuru: “A soldier is  the very basis, the silent and barely visible cornerstone, of our fame, culture, physical well-being and prosperity; in short, of the entire nation-building activity.” Selfless, versatile, resourceful and incredibly dedicated, the Indian Army is one of India’s foremost nation-builders.

From protecting the country’s volatile borders to providing relief during disasters, from quelling rioters during communal strife to being the country’s last resort in counter-insurgency, the Army has time and again protected India from internal and external threats.

Taking into consideration their self-less and daring service, a new plan is being formulated to use their services to protect the Bandipur Tiger Reserve — to combat any emergency, natural and man-made and preventing poachers and plunderers. 25 retired soldiers will soon join the forest Force, giving the Force extra power, tactics and extra courage and mettle to fight enemies of nature.

Already, the Special Tiger Protection Force (STPF) is functioning in the Tiger Reserve patrolling the forests to safeguard tigers, co-predators and prey animals as well protecting habitats. The personnel are patrolling the vulnerable locations in forests. The Force personnel are also assisting in tiger and elephant capture operations and many of them have been promoted or transferred.

As such, there is a vacancy of 60 men in STPF and these vacancies are hurting forest operations and the existing staff cannot carry out their functions efficiently. Especially in emergencies, there are not enough personnel to tackle them. Due to Government policies, new appointments are not possible and because of this, the Department has planned to hire the services of retired soldiers.

Apart from providing meaningful employment to ex-servicemen, these Army men will infuse military-like work culture and commitments into high-priority eco-projects. Their rigorous training, years of service in hostile conditions and dedicated personalities will help in safeguarding the green forests, feel Department officials. Even if new men are recruited, the Department has to spend money and resources to train them. Instead, it is convenient for the Department to employ the services of retired and able-bodied soldiers, say officers who are behind the idea.

Retired soldiers who have put in 18 years of service in the Army as per service rules will be given jobs to protect forests. The Army personnel will join the men from the Tiger Protection Force and will perform all the duties of the Tiger Force. This will not only help the Department to fill the vacant places with efficient staff nut but will also provide a professional defence touch to the existing Force, Bandipur Project Tiger Director T. Balachandra told Star of Mysore.

“This will be a new experiment within our limitations and we hope to recruit 25 retired Army personnel to assist the Tiger Task Force in protecting forest wealth and wild animals.

READ ALSO  Your wild safari to Bandipur, Nagarahole will get costlier

This Force will be exclusively used for protection purposes and vehicles will be provided to them and they will be called out in case of emergencies. The Force will function in the ‘golden hour’ principle where the men will rush to the emergency spot to prevent further damage within the critical hour, Balachandra added.

“The Department will not be burdened by the salaries of the recruited Army men and salaries can be provided out of the funds released to protect the tigers and the funds released to maintain the Special Tiger Task Force. We have discussed the proposal with Principal Chief Conservator of Forests (Head of Forest Force – HOFF) and other higher officials and recruitments will begin once we get a green signal,” he said.