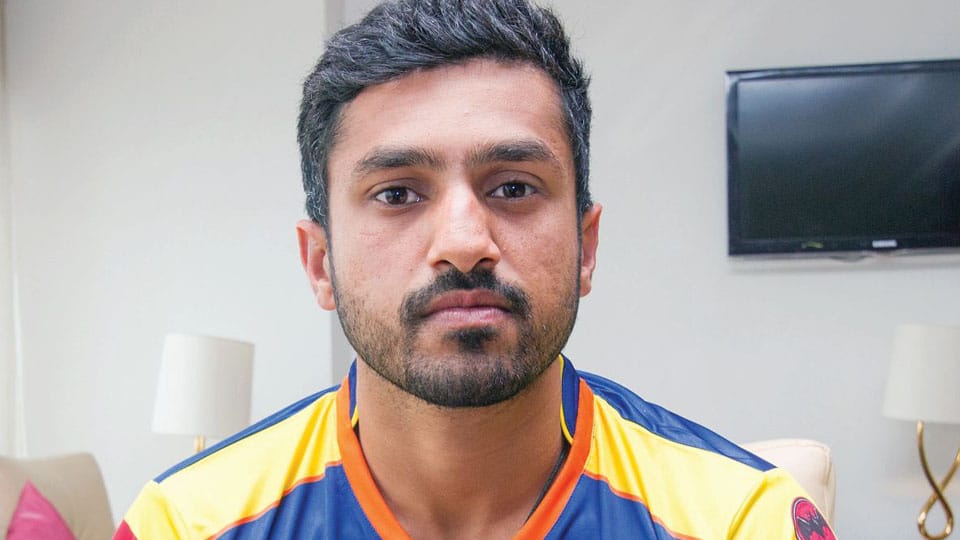 Very excited to be a part of Mysuru Warriors: Karun Nair

He is the second Indian to score a triple century in test cricket after Virender Sehwag. He had a dream first-class debut in 2013-14 during which he played a vital role for Karnataka to win all major domestic tournaments. He hit three consecutive centuries in thee Ranji Trophy (2013-14) which included the quarter-finals and semi-finals. The following season, he scored a record-breaking triple century to help Karnataka defend its title.  Meet Karun Nair from Bengaluru who rose to instant scoring his triple century (303 not out) against England in Chennai last year. Karun, who led the India ‘A’ in the South Africa tour, will lead Mysuru Warriors in their quest to win the coveted KPL trophy.  Star of Mysore caught up with Karun for a brief interview ahead of Mysuru Warrior’s match tomorrow. Excerpts…

Star of Mysore (SOM): How did cricket happen to you?

Karun: Like any other youngster, I used to play a lot of gully cricket and watch matches on television. Being a big fan of Sachin Tendulkar, I used to watch his batting and imitate his style. As I used to play a lot of cricket, my parents thought it was safe to put me into an academy. My father was also passionate about the sport and he took me to Koramangala Cricket Academy and that’s how I started.

Karun: It was a long wait indeed. I was in the team for about three years and after a point I was actually counting the games. I was in the team for 15 games and giving water for 15 games. It was frustrating but I was preparing for the road ahead by watching my seniors play. It actually helped me and I never felt being out of place. I was lucky enough to be a part of the team which won the all three (Ranji, Irani and Syed Mustaq Ali Tournaments) in the same year. And I never looked back and kept going. I was picked up for the Sri Lankan tour but never got a chance to play. Luckily, I played in the test match against England which showed my talent.

READ ALSO  Mysuru all set to bat for KPL

SOM: What was the feeling after scoring triple century against England?

Karun:  I cannot explain. It was one of those days where everything went right for me and it was a proud moment. My parents were watching the match which made it more special.

SOM: Tell about your dressing room experiences with senior cricketers.

Karun: The dressing room is like a big family and Captain Virat Kohli is aggressive and inspirational. He likes everyone to be like one family and everyone follows him. To have a leader like him is good for the team because when the captain is trying hard to give his best for team it inspires team members.

SOM: After you, K.L. Rahul and Manish Pandey, do you see more cricketers from Karnataka in the Indian squad?

Karun: Very much. I think there are a lot of talented cricketers who have been knocking at the doors of Indian team. Having played age group cricket with some of the best cricketers, I think it is just a matter of time when we find more players from Karnataka being absorbed into the Indian squad. There are players like Samarth, who did well for the India ‘A’. It will take him another good season to make it to the national side.

SOM: Share us your thoughts about leading the India ‘A’ team.

Karun: It was a great experience. I had to handle eleven different people from eleven different parts of the country.  It was a bit tough but I enjoyed it. We probably lost the first match as the team didn’t play collective cricket but we came back strongly in the second match and won the game. And I always believe that a captain is as good as a team. As long as team does well, the captain is good and vice versa.

SOM: What are your thoughts on KPL?

Karun: KPL has always been an exciting event and it is great opportunity for everyone to express themselves. And I also remember when I was picked for the first time I was excited as it was a good opportunity to play in front of a huge crowd and to come live on television. It will be a great challenge.

SOM: What do you have to say about Mysuru Warriors, since it is your first time in the team?

Karun:  I am glad to be a part of Mysuru Warriors. Ever since the team joined the KPL, I have only been hearing good about the team. We have been working really hard and we have a good bunch of cricketers, all thanks to the team management that has done well at the auction to pick this great side filled with enthusiasm.

SOM: How has the team planned for this season?

Karun: T20 cricket is such a format where any team can emerge victorious. It is about following the different processes and doing well. We have been really working hard and everyone has been putting their efforts to emerge victorious in the tournament.

SOM: What is your opinion about the team management?

Karun: It is the best team and I always wanted to be a part of Mysuru Warriors. I would like to thank Arjun Ranga for all his support and I am sure that he will continue to support the team and help in its continuous growth.