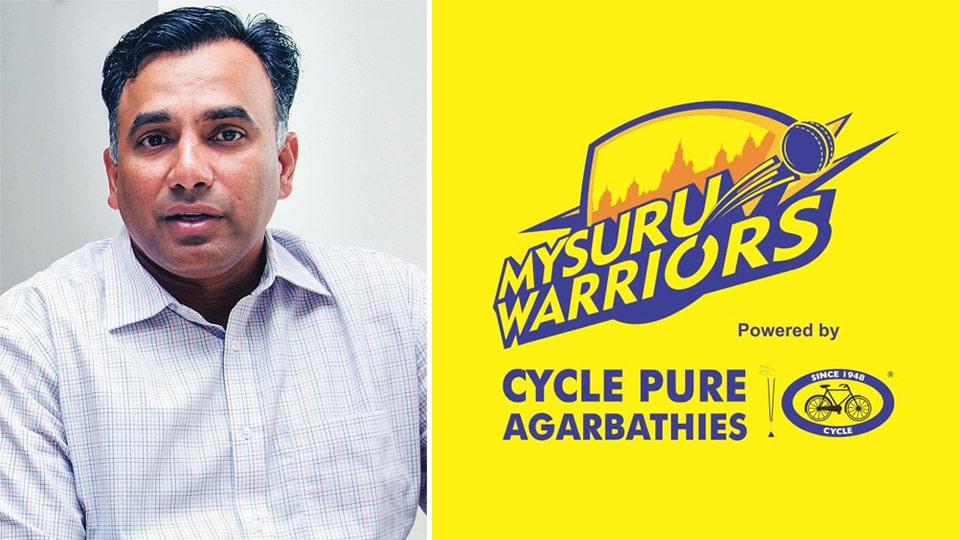 We are here to support talented sportspersons: Arjun Ranga

N.R. Group, the makers of Cycle Pure Agarbathies, is a known family business house. The company has involved itself in many charity works and has also been supporting sports by sponsoring talented sportspersons from Mysuru representing the country at national and international levels. Not only this, Cycle Pure Agarbathies has also been one of the leading sponsors for International Cricket Tournaments apart from owing Mysuru Warriors, the Karnataka Premeir League franchise.  Star of Mysore caught up with Arjun Ranga, Managing Director, Cycle Pure Agarbathies to know about Mysuru Warriors’s preparations for this year’s KPL. Excerpts…

Star of Mysore (SOM): What does cricket mean you?

Arjun Ranga: Cricket is like our team’s tagline in our song ‘Hannondu Deha, Ondu Hrudaya’ (eleven bodies, one heart). It is an amazing sport and it is always good to be involved with the game. No matter who you are, once you enter the ground all eleven are one and should come together to perform. It is a great leveller where everybody has to perform. For me, cricket is life.

SOM: N.R. Group has been involved in sports promotion. Tell us something about it.

Arjun Ranga: As a brand and as a company we have been supporting sports for a long time now. I remember my father and uncle extending support to talented sportspersons from Mysuru in 1980s and 90s. My uncle was instrumental in getting the 1983 Cricket World Cup winning team to Mysuru to play an exhibition game. We believe that sportspersons represent a breed that talks about commitment, hard work and passion. And we believe that sport builds camaraderie, strong team and stronger nation. We support sportspersons from Mysuru as we are a Mysuru-based company.

Arjun Ranga: Our entry into cricket was sudden. It was during 2003-2004 when Pakistan visited India after a long break. The tournament had to commence the next day and the main sponsors backed out. Later, I got a call from Ten Sports asking if I was interested to be a part of cricket. We had never invested in cricket before and I thought it was a big opportunity. Decision making was easy since ours is a family business. We took a decision overnight to be a part of the series.

The reason for us to sponsor cricket is because it is followed by everyone irrespective of their religion like our agarbathies which is also used by everyone.

SOM: Can we expect you sponsoring Indian Cricket Team in the near future?

Arjun Ranga: Yeah, we had bid this time for BCCI rights for the next five years.  We had a consortium bidding but Paytm scored over us. But I would like to say that we will continue to get BCCI contracts in the future as well.

SOM: Tell us about Mysuru Warriors?

Arjun Ranga: We are sponsoring cricket tournament with an eye on branding and advertising. But with respect to Mysuru Warriors, we always wanted to do something for the city. We wanted to inspire our city and the youth. We we wanted a team which is aggressive to do away with the notion of Mysuru being a retirement paradise. That is why we chose the name ‘Warriors’.

SOM: What is your opinion about current Mysuru Warriors team?

Arjun Ranga: Our aim was to get good players and we have a dream team. We did not imagine to get five best players from ‘Pool A’ especially Karun Nair. The responsibility of the management is to give the coaches and the captain the responsibility of leading the team and taking important decisions and that is exactly what we have done. We believe in empowering the team and build a strong management culture, strong work ethics within the team which I believe will deliver the desired results. If we are able to inspire at least five players among the 20 to do better in their cricketing career, I believe our job is done.