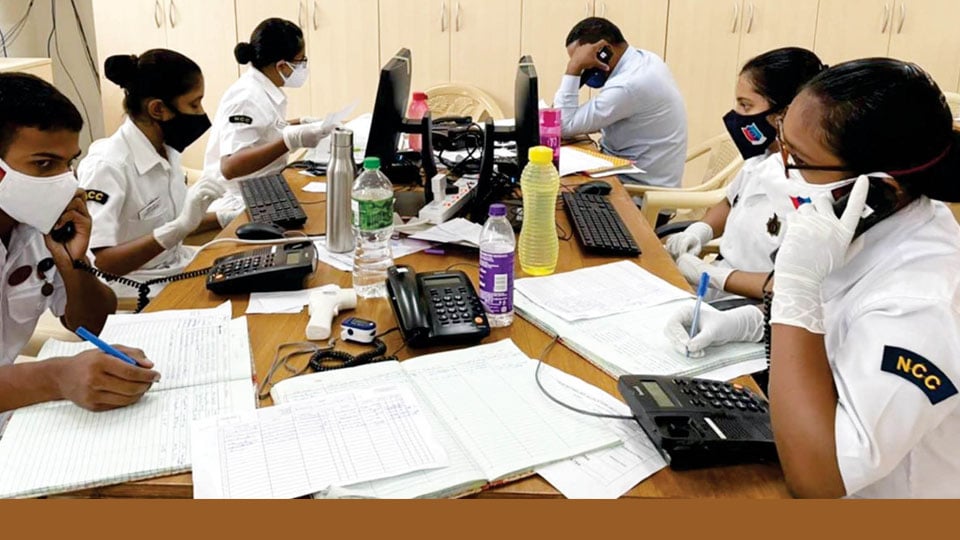 Mysore/Mysuru: The Ministry of Defence has permitted temporary employment of the National Cadet Corps (NCC) under ‘Exercise NCC Yogdaan’ in the battle against the Covid-19 pandemic.

Responding to the call given by Mysuru Deputy Commissioner Rohini Sindhuri for voluntary service by the Senior NCC cadets of HQ NCC Group Mysuru, the modalities and safety angles were examined at the Group Headquarters by the Group Commander and Lt. Col. Ashok (retired), Officer-In-Charge of the District COVID Control Room (COVID War Room).

The requisition was processed through the HQ Karnataka and Goa Directorate to Director General NCC, New Delhi. All the processing was carried out via mail and within four hours the approval to employ the cadets with most precautionary measures was sanctioned.

One more meeting was held at DC’s Office and the finer points were discussed for the deployment of the cadets. The Commanding Officers of the NCC Units which incorporate the Army, Navy and Air Force prepared their respective unit cadets and staff. The consent of their parents was obtained before their employment.

The selected volunteer cadets (in this case the girl cadets are more in number than the boys) were given the principal dose of vaccination before their deployment. A total of 60 cadets in three shifts are presently being utilised on an everyday schedule from 8 am to 6 pm which has now been increased to twelve hours from 8 am to 8 pm.

The District Administration has contributed immensely by providing various safety measures against Covid-19.

Before this at the National level, NCC was earlier employed extensively during the 1965 and 1971 conflicts as the second line of defence. However, NCC has been contributing immensely during all the disaster management.

Colonel Rakesh R. Menon, Group Commander, NCC Group Mysuru, expressing his gratitude to the parents of all volunteer cadets and also of those cadets in waiting, has thanked the Heads of the Schools and Colleges of these cadets.

He has also lauded the Deputy Commissioner and the supporting staff for providing this opportunity to the youths to serve the citizens in times of crisis.