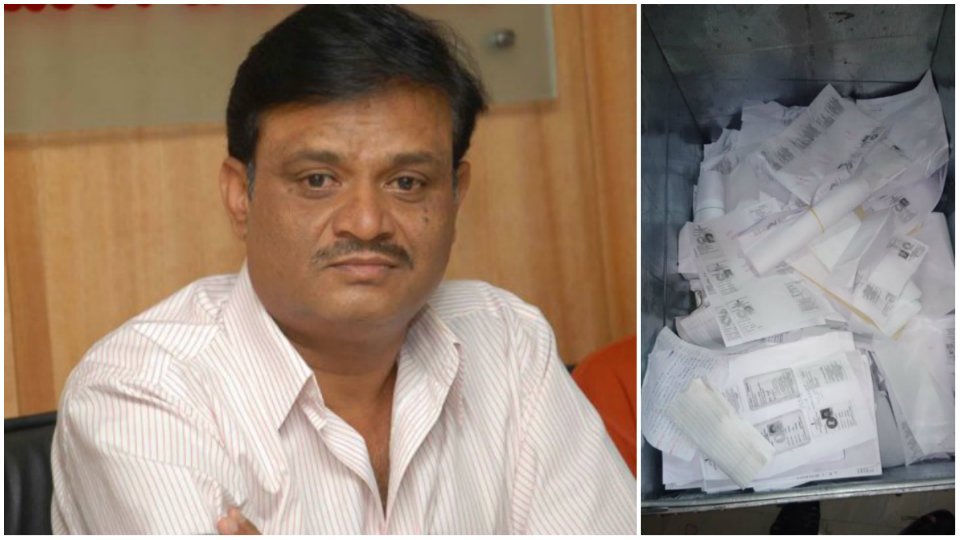 Bengaluru: In the wake of more than 9,000 voter ID cards seized at an apartment in Jalahalli, the Bengaluru Police yesterday night registered an FIR against 14 people, including incumbent MLA for Rajarajeshwari Nagar constituency Munirathna. The FIR also names the owner of the flat Manjula Nanjamari and Rekha, one of the tenants, as accused in the case.

They have been booked under eight sections of the Representation of the People Act, 1951, as well as under the Indian Penal Code (IPC) for bribery, undue influence at an election, criminal conspiracy, and disobedience to order duly promulgated by a public servant.

The FIR was registered by the Jalahalli Police based on a complaint lodged by J.R. Bhaskar, Assistant Executive Engineer (AEE) BBMP, who is also a nodal officer for the model code of conduct for Goraguntepalya subdivision.

In his complaint, Bhaskar said that 9,564 voters ID cards, 6,342 receipts, 20,700 voter slips with photos but no signature, five laptops, three printers, and 10 mobile phones were seized from the flat and the watchman’s shed. Inquiries by the model code of conduct officials revealed that Manjula Nanjamari had rented it out to Rekha, who is allegedly part of the ‘operation to induce voters’.

However, at a press conference by Munirathna, Rekha’s brother Rangaraju said he lived with his family on the ground floor of the same building on rent, and his sister Rekha lived in J.P. Park. “We don’t know why we are being dragged into this,” he said, as Rekha sat with her face covered.

The other accused in the case are Sarid Momen, Chinna Thambi, Ponnayamma, Chinna Dorai, Lakshmamma, Rashmi, Lalithamma, Sharada, Sharavana, Nataraja K. Krishnappa, and Manjunatha. The Police are still to ascertain the exact role the accused played.

One more FIR against Munirathna

The Police have filed another FIR against Munirathna for allegedly supplying T-shirts and shorts worth Rs. 95 lakh to voters. Chandrappa, an officer of the model code of conduct squad had filed a complaint with the Sadashivanagar Police.

He said his team had intercepted a truck at Pujari Layout in Ashwathnagar only to find that it had hundreds of cartons and plastic sacks containing 5,018 T-shirts with Munirathna’s photo emblazoned on them. Another 23,393 shorts were also recovered.

Chief Electoral Officer Sanjiv Kumar said that the report of the Deputy Election Commissioner (DEC) into the seizure of huge number of EPIC cards in RR Nagar constituency is placed before the Election Commission of India (ECI) for active consideration.

Sanjiv Kumar also said that a decision will be taken by the ECI with regard to the countermanding of polls of RR Nagar constituency based on the report of DEC.