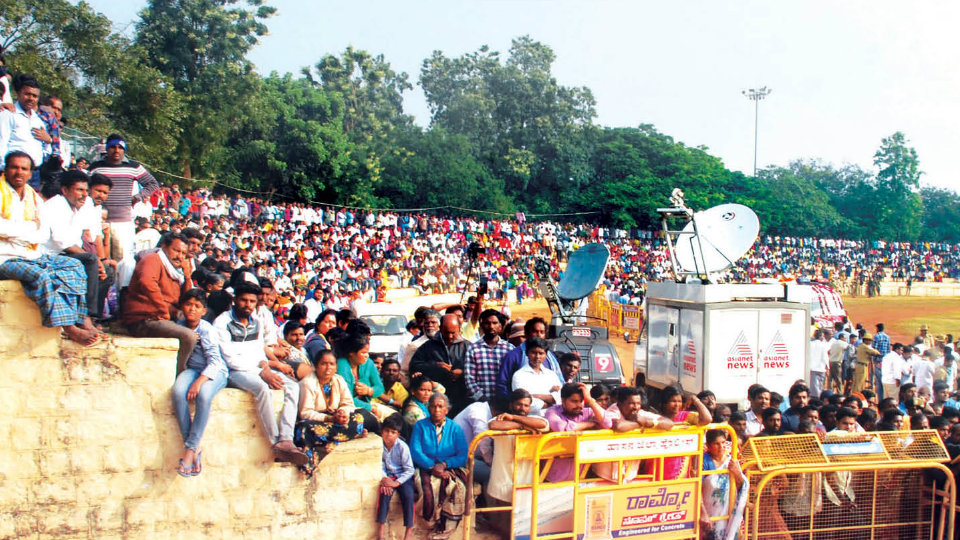 Mandya: Scores of teary-eyed fans paid their last respects to actor and politician M.H. Amarnath, popular as Ambarish, in Mandya yesterday. The darling of the masses passed away at a private hospital in Bengaluru on Saturday night after a cardiac arrest.

After thousands of people — men, women and children — from across Karnataka came in droves yesterday morning, since the break of dawn, at Bengaluru’s Kanteerava Stadium where the mortal remains of the legendary actor were kept for public-viewing, the body was airlifted in a special Indian Air Force Chopper to Mandya, his hometown, for fans and relatives to pay homage.

Prior to the arrival of the body, military personnel conducted trial landings at the temporarily established helipad at the Stadium with a helicopter at 2.40 pm. At 5.01 pm, the helicopter landed at the Stadium.

Even before the mortal remains arrived at the Stadium, more than 30,000 people had assembled there. The sound of the chopper electrified the crowd who stood up and wailed “Ambarish Anna” with their hands raised. People came from the nook and corner of Mandya and Doddarasinakere, Ambarish’s birthplace. They hired buses, tempos, cars and other vehicles from the villages to reach the Stadium.

Minor Irrigation Minister and Mandya District Minister C.S. Puttaraju, Transport Minister D.C. Thammanna, Tourism Minister S.R. Mahesh, Mandya Deputy Commissioner N. Manjushree, and others received the body. Puttaraju personally supervised the arrangements at the Stadium and even lent a helping hand for the body to be shifted from the chopper to the place it was kept for public-viewing.

Mourners filed past the mortal remains of Ambarish, wrapped in Tri-colour, with occasional outburst of emotions. They wailed for “Mandyada Gandu.”

The Mandya District Administration had expected over a lakh people. But belying the expectations, crowds just swelled after the body arrived. By around 8 pm, there were lakhs of people and the crowd spilled on to the roads and the bus stand.

Soon as the helicopter carrying the body of Ambarish landed at Sir MV Stadium, thousands of fans who had stood waiting for long to have a last glimpse of the late actor, rushed towards the platform where the body was kept. As a result, the Police had to resort to mild lathi charge to control the surging crowd. Hundreds of Policemen were deployed at the Stadium to ensure maintenance of Law and Order.

READ ALSO  Sumalatha Manjegowda to withdraw her nomination from Mandya

The mood at Visvesvaraya Stadium was emotional. There was a palpable sense of loss. People cried, “Ambarish Anna Mathhe Hutti Baa.” They recollected how Ambarish helped them during their time of crisis. “If Ambarish addresses you in singular and he abuses you, you know that he is true to his nature — with a large heart,” said people. 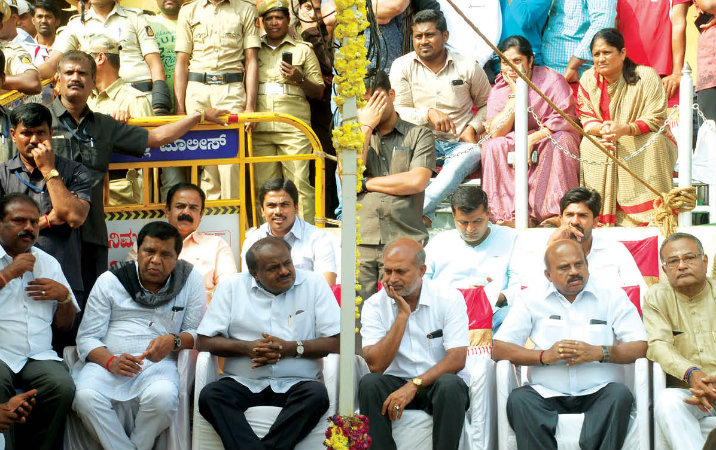 Chief Minister H.D. Kumaraswamy, Tourism Minister S.R. Mahesh and others at the Stadium in Mandya this morning

Ambarish had endeared himself to the local masses as an actor and a politician with his down to earth nature and the number of people at the Stadium reflected this fact. People braved the evening and midnight chill and continued to pour into the Stadium all through the night. Arrangements such as railings and barricades, security, drinking water and continuous electricity supply were made at the Stadium for the people.

Shopkeepers had put up flex boards and posters of Ambarish along major roads in the town. Banners and boards were put up at major junctions along the Mysuru-Bengaluru Highway.

Ambarish made it a point to visit every village festival before his health deteriorated and was flown to Singapore in 2014. “Even otherwise, he used to meet us and have a chat whenever he was in Mandya. His death is an irreparable loss to all of us, Kannada film industry and electoral politics,” said a villager.

“I gave him the title Mandyada Gandu”

Ambarish would never listen to anyone and had his way always. But he respected farmer leader and former MP G. Madegowda a lot and only listened to him. Ambarish considered Madegowda as his mentor.

When Ambarish’s mortal remains was flown into Mandya, Madegowda wept and said that Ambarish’s death has created a void that is impossible to fill. “I gave him the title “Mandyada Gandu” and he lived up to that name and never let his people down even when he was ill,” Madegowda said.

Recalling his association with the late actor, the farmer leader said, “He was busy in the film world and I had introduced politics to him where he grew beyond boundaries. He considered me as his political mentor and respected me a lot,” he said.

During the height of Cauvery agitation, Ambarish would often consult with Madegowda and had supported the latter during the Cauvery agitation and had even resigned as an MP. “Only Madegowda had the right and authority to chide Ambarish. And he would listen. And he (Ambarish) was a “don’t care” master for everybody else,” said people.