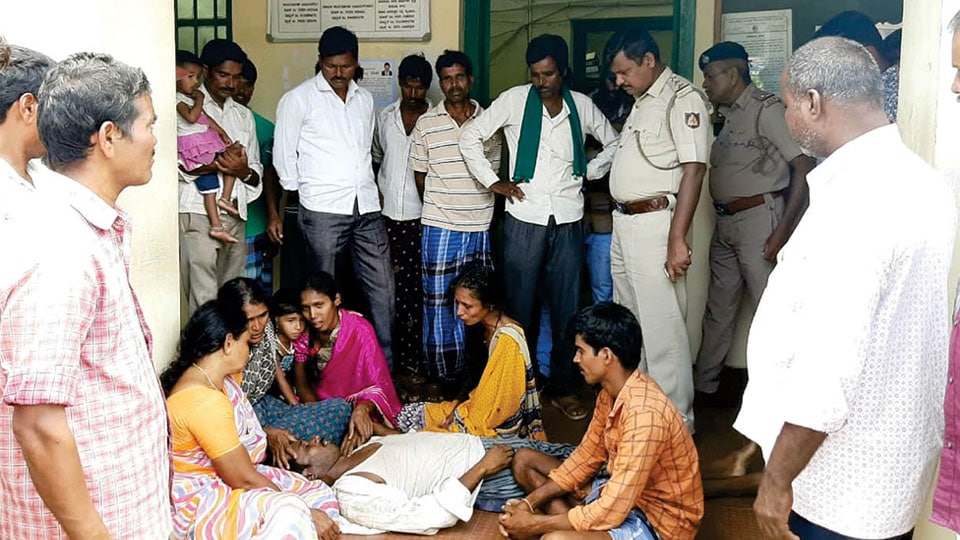 Nanjangud: A 30-year-old farmer was electrocuted when he was walking near a transformer on Haginavalu-Surahalli Road near Volagere village in Nanjangud this morning.

The deceased has been identified as Basavaraju. He is survived by his sister, brother and his mother. The incident took place when the farmer had gone to his field at around 9.30 am.

The villagers of Volagere brought the body of Basavaraju to Nanjangud Government Hospital and protested.

Over 500 irate villagers and deceased farmer’s family members with  support from Raitha Sangha leaders, sat in protest in front of the Hospital with the body of Basavaraju demanding Karnataka Power Transport Corporation Limited (KPTCL) and Chamundeshwari Electricity Supply Corporation (CESC) to provide at least Rs.20 lakh compensation for the victim’s family. They did not agree for a post-mortem till the announcement of compensation was made.

Later, the agitating farmers shifted the dead body from the hospital to the CESC Sub-Division Office on Rashtrapathi Road and continued the protest.

The protesters shouted slogans against CESC officials and held them responsible for Basavaraju’s death. They alleged that the CESC linemen and Junior Engineer of Haginavalu were responsible for the death.

They also condemned the negligence of CESC employees for not attending phone calls of farmers and for not replacing the damaged transformer and solving frequent power disruptions.

Later, CESC Nanjangud Sub -Division Executive Engineer Ramesh and other officers pacified them and announced that a compensation of Rs.5 lakh will be paid and a detailed inquiry will be ordered.

Following this, the agitating farmers withdrew their protest.

Farmer Nanjangud
Govt. schools to be developed on the lines of Kendriya Vidyalaya: CM HDK
MUDA to build 2,000 group houses at four places in city