Home » News » Govt. schools to be developed on the lines of Kendriya Vidyalaya: CM HDK 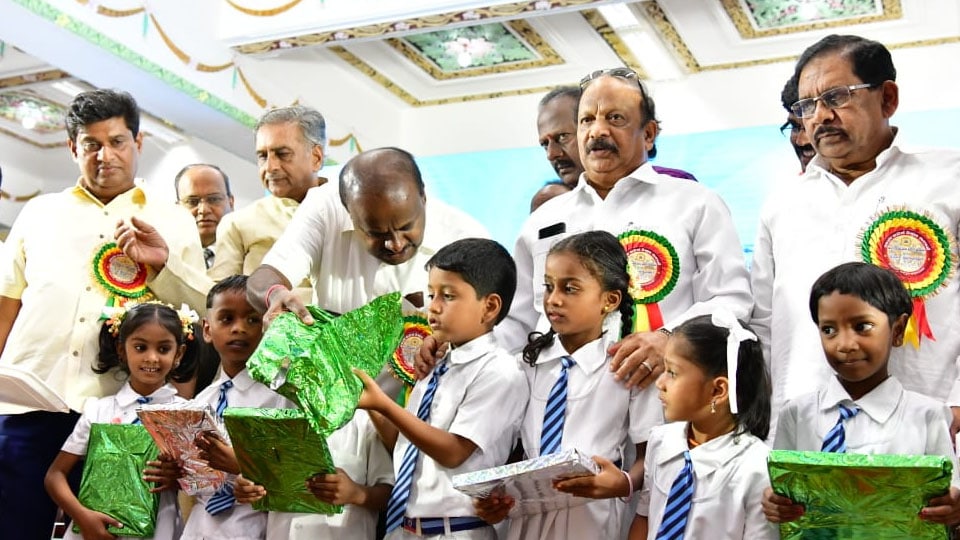 Govt. schools to be developed on the lines of Kendriya Vidyalaya: CM HDK

Bengaluru: Chief Minister H.D. Kumaraswamy has informed that the newly started 1,000 English medium sections in Government Schools will be developed in the State on the lines of Kendriya  Vidyalaya Schools.

Speaking at a function held at Banquet Hall in Vidhana Soudha in Bengaluru yesterday, he also declared that the intake of admissions to these English medium section schools will be increased to from the existing 30 to 60 or 90 students from the next academic year.

There has been a huge demand for these schools from parents after the Government decided to roll out English Medium sections this year as enrolments were declining.  Reiterating his commitment for the growth of Kannada, he said that he had started these schools despite criticisms from various quarters including senior writers as learning English is inevitable in present days to make youngsters ready for the competitive world.

The State Government has also given training to 1,000 teachers to ensure quality education to students of these schools, he said.

Chief Minister H.D. Kumaraswamy also launched pre-primary classes in 276 schools and 100 Karnataka Public Schools (KPS) that will operate in the 2019-20 academic year on the same occasion.

Karnataka Public School is a concept introduced by the State Government to reduce the number of drop-outs from Primary School to High School. Students will join the school at LKG, which will be the entry point and will study till class 12 in a single campus.

He said 1,000 Karnataka Public Schools which was announced in the 2019-20 budget in hobli headquarters will have English medium sections in class 1, in addition to Kannada medium classes and 100 KPS schools will function from this year.

Many Government Schools, which have been identified as KPS with sections from pre-Primary to class 12, will get an overhaul, both in infrastructure and the way education is imparted to students, this academic year. Individual schools have chalked out plans for mathematics and  computer laboratories, gymnasiums and music and dance classes.

Schools that have already prepared master plan have been awarded Rs. 45 lakh each to improve their infrastructure.