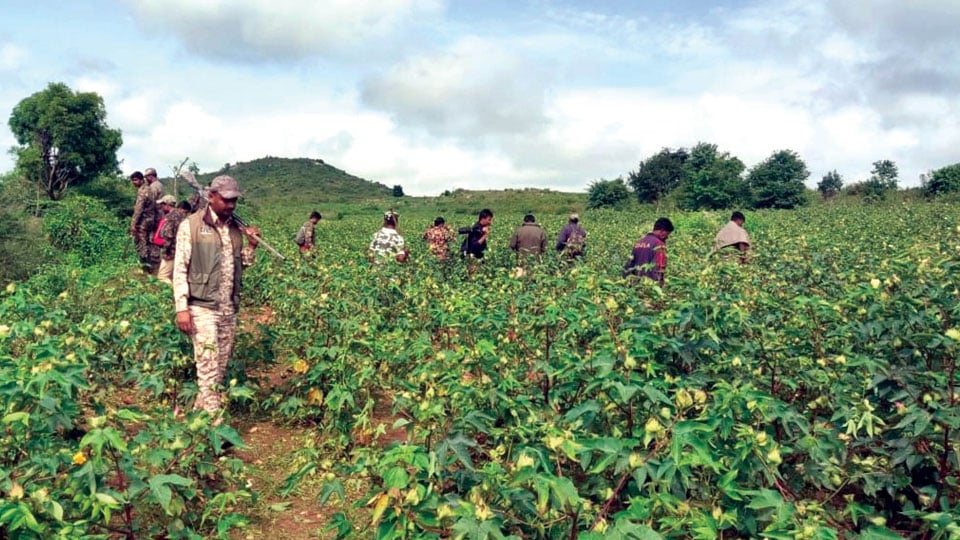 Mysore/Mysuru: The Forest Department officials and staff, who are on their toes to trace and capture the tiger which had attacked and killed a farmer and his cow at the field in Odeyanapura village, bordering Bandipur Tiger Reserve recently, have installed 30 camera traps at vantage spots and have also summoned two tamed elephants for the combing operation.

The farmer, identified as Puttaswamygowda of Odeyanapura village bordering Bandipur Tiger Reserve, was grazing his cattle along with two others from his village when the tiger, which was hiding amidst tobacco crops, attacked and killed him and also his cow. Two others, who were with Puttaswamygowda fled in two different directions, thus saving themselves.

Meanwhile, the Forest Department personnel, in a bid to trace and capture the tiger, have begun the operation. They have summoned tamed elephants Rohit and Parthasarathy from Rampura Elephant Camp for the combing operation and have also placed a cage near the spot where the cow was killed.

Also, the Forest personnel have installed 30 hi-tech camera traps at vantage points to ascertain the identity of the tiger through its stripes and to observe the movement of the tiger. In case the tiger is aged about 9 years and if it is confirmed that it is unable to hunt animals, the Forest staff would be given permission to capture the elusive tiger.

The combing operation has begun yesterday and the Forest Department authorities have instructed the villagers of Odeyanapura and surrounding villages not to leave their cattle for grazing in forest borders besides instructing villagers to be very careful while going to their lands to take up agricultural works.