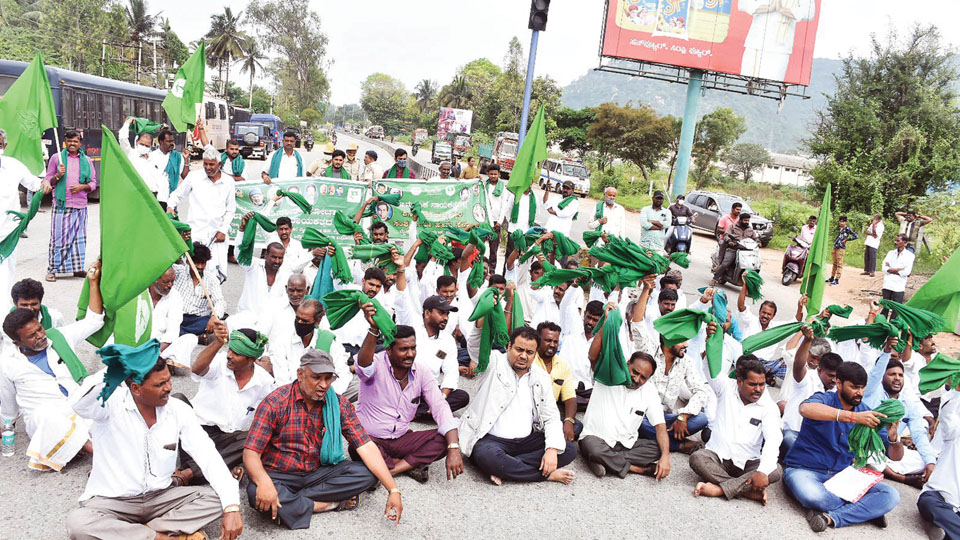 Mysore/Mysuru: Farmers held demonstrations at entry and exit points of the city this morning to mark one year of the farmers’ protest against the Centre’s farm laws. The intensity of protest was severely felt on Mysuru-Bengaluru Highway and Mysuru-Nanjangud Highway where vehicular traffic was thrown out of gear.

Police had a tough time in controlling the protesters who had brought their livestock onto the roads and had blocked the Highways at many places. Though it was not a united protest as the demonstrators were led by various splinter groups of farmers’ associations, the impact was high as vehicles waited in long queues, waiting for clearance.

Last week, Prime Minister Narendra Modi announced that the three controversial farm laws would be rolled back. The farmer unions welcomed the move but have said that they would not end their protest till the laws are formally repealed and other demands including Minimum Support Price (MSP) are met.

With the protest showing no signs of retreat, even after the Centre announced that the three laws would be repealed, farmers held several events and protests across the country. In Mysuru, the Mysuru-Bengaluru Highway and Mysuru-Nanjangud Highway were the venue of protests with the Kirangooru Circle after Srirangapatna being the epicentre.

Farmers converged there as early as 8 am and began their agitation. Protests on the Mysuru-Nanjangud Highway started at 11 am and did not have much of an impact as the Police were ready with the traffic diversion plan. The protests were organised under the banner of Samyukta Kisan Morcha, State Sugarcane Growers Association, Karnataka Rajya Raitha Sangha (Samoohika Nayakathva – collective leadership) and Hasiru Sene.

As the major impact was on the busy Mysuru-Bengaluru Highway, traffic was diverted at the Columbia Asia Hospital Junction and no heavy vehicles were allowed towards Srirangapatna, except local vehicles.

Another route where the traffic was diverted to was Bannur, Malavalli, Maddur and Kanakapura to reach Bengaluru.

There was a long line of traffic on the Royal Inn Junction and on the Mysuru-Bengaluru Highway, the Police had to clear ambulances heading towards various city hospitals.

On the Nanjangud side, the traffic was diverted through Gejjagalli and Devalapura as the protesters squatted on the roads with their livestock.

The Police had to issue stern warnings to the protesting farmers a couple of times and they were warned of arrests. Farmers who are preparing the lunch for protesters have set up a makeshift kitchen at Baburayanakoppal in Srirangapatna.