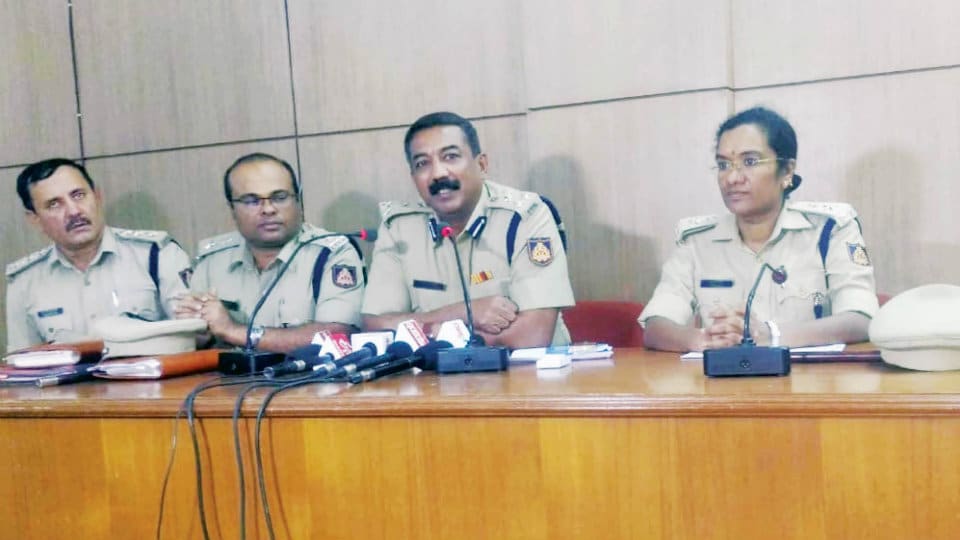 Fear the Fine: Hefty traffic penalties in city from tomorrow

Mysuru:  If Bengaluru City Traffic Police has collected over Rs. 30.11 lakh as fine in 36 hours ever since the Motor Vehicles (Amendment) Act, 2019 has been implemented in the State, the Mysuru City Police are all set to penalise you if you violate traffic rules from tomorrow.

From tomorrow, September 7, you cannot ride without helmet, driving licence or insurance in Mysuru city. You will have to cough up Rs. 1,000 if you don’t wear a helmet, Rs. 5,000 if you don’t have insurance (depending on repeat offence) and Rs. 10,000 if you are found drunk while driving. (Refer to Star of Mysore dated Saturday, Aug. 31, page 6 for the complete list of traffic fines).

Announcing the tomorrow’s implementation of the traffic fine rule, City Police Commissioner K.T. Balakrishna told media persons at his office this morning that the steep penalties will be imposed as per the State Government’s notification dated June 25, 2019.

Flanked by DCP (Law and Order) M. Muthuraj, DCP (Crime and Traffic) and Traffic ACP G.N. Mohan, Balakrishna said that the fines will be implemented top ensure an orderly Dasara where people abide by the traffic rules. When reporters aired their opinion that the fines could have implemented after Dasara, Balakrishna said that when thousands of tourists descend on city for Navaratri, it will not look nice if traffic rules are violated.

In Bengaluru, commuters are crying hoarse over the unfair slapping of fines and many citizens believe that the Police should also be watched while doing their job, so that there is no abuse of power or scope for corruption. It has been observed that traffic Police verifying vehicle documents in isolated places or far away from CCTV cameras that are fixed at traffic junctions as they want to pocket the money collected from motorists without issuing tickets (receipts) for a traffic violation.

To prevent misuse of power, body-worn cameras will be given to all those traffic personnel checking vehicles and collecting fines. 25 body-worn cameras have been distributed and more cameras will come soon. “Also, the city has 64 CCTV cameras at junctions and of them, 59 are in working condition. Also, for Dasara, 190 cameras will be installed from Mysore Palace till Bannimantap. All these will help us nail violators and maintain law and order during Dasara,” Balakrishna said.  “Traffic Police Inspectors have been directed to use the body-mounted cameras without fail,” he said.

Over 15 lakh visitors are expected to visit Mysuru for Navaratri and apart from the Police CCTV cameras, over 14,500 shops, commercial establishments, hotels and lodges have installed CCTV cameras. “We will obtain visuals from them and maintain law and order,” he said. Also, Jumboo Savari route and its surrounding will be cleansed. “All houses in the areas of the route will be visited and details of inmates, guests and expected guests for Dasara will be noted down and our people will keep a watch on these houses to prevent sabotage,” he said.