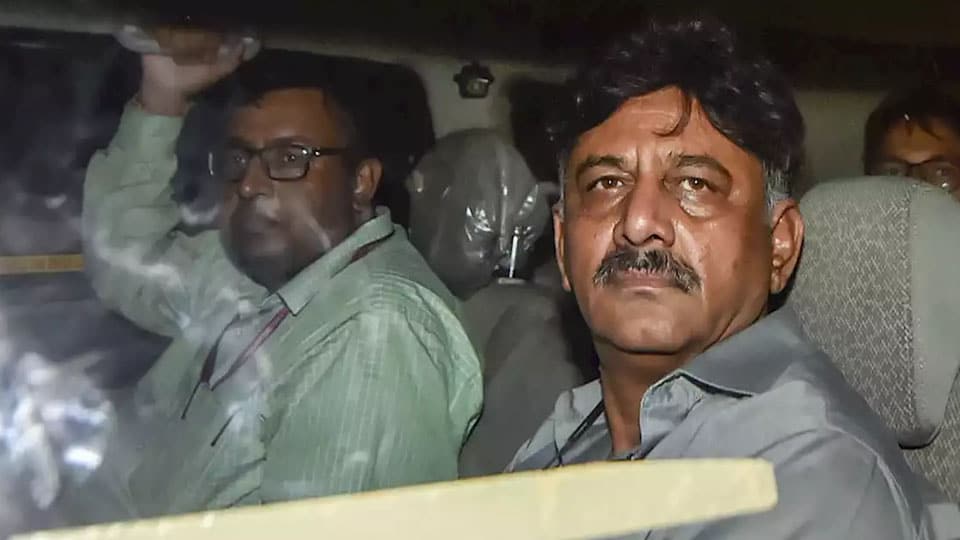 More trouble for DKS as one accused turns approver

Bengaluru:  The Enforcement Directorate (ED) case under which Shivakumar has been arrested emerged from a chargesheet filed by the Income Tax (I-T) Department in 2018. The I-T Department charged him with tax evasion and hawala transactions before a Special Court in Bengaluru.

Now, one of the four other accused in the case has reportedly agreed to become an approver under Section 306 of the Code of Criminal Procedure (CrPC). This could mean further trouble for Shivakumar. Notably, the ED yesterday gave an undertaking before the Karnataka High Court that it will not arrest three of the other accused till September 17 if they appear for questioning when summons are issued. Rajendra’s name, however, did not figure in the ED undertaking.

The assurance was given to the Division Bench during the hearing of the appeals — filed by Sunil Kumar Sharma, Sachin Narayan and Anjaneya Hanumanthaiah — challenging Aug. 29, 2019 Single Judge order that had rejected their plea against summons issued to them by the ED in January.

The ED is questioning Shivakumar on his association with Sunil Kumar Sharma and on the source of Rs. 10 crore cash that was allegedly recovered during the I-T raids on Aug. 2, 2017 from four properties in Delhi and in Karnataka, which are said to be linked to Shivakumar and his associates.

“The I-T officials in August 2017, had seized Rs. 6,61,26,000 from a room in flat number 201, B-5 at Safdarjung Enclave, New Delhi alone, which reportedly belonged to Shivakumar. During the course of investigation, Rajendra told the I-T officials that in January 2017, cash in crores was allegedly sent to the AICC on the instructions of Shivakumar, Vijaya Mulgund and Anjaneya.

The I-T Department had also raided the premises of the then Karnataka Congress Secretary Vijaya Mulgund in August 2017. The accused had used coded language to escape scrutiny. ‘KG’ was the coded word for lakh (in cash) for the hawala transactions, which had allegedly come to light during the I-T investigation.

The ED is questioning Shivakumar on his association with Sunil Sharma. The I-T officials had submitted in the chargesheet that they had questioned Sharma as to why he should not be considered as being involved in hawala transactions as a ‘Ten Rupee note’, which is commonly used as a unique identifier between hawala operators, was in his WhatsApp chat. Sharma was reportedly evasive in his answers.

It is said that a hawala operator hands over a torn Rs. 10 note to the person who wants to send unaccounted cash through hawala. The Rs. 10 note is then torn and one part of the currency note is given to the person in another city who has the cash that has to be transported and the other part of the currency note is handed over to the human hawala courier. This is to identify the authentic receivers of cash.

Once the hawala courier goes to the designated person to get the cash, he shows one part of the Rs. 10 currency note to the hawala operator. The operator then matches the torn parts of the note and finding the human courier genuine, the hawala operator in other city pays the amount which is then transported to the receiver. Both the operator and the human courier are given commission for every successful hawala transaction at various places across the country. In order to leave no evidence of hawala trade, operators destroy the Rs. 10 note that was used in the hawala deal.