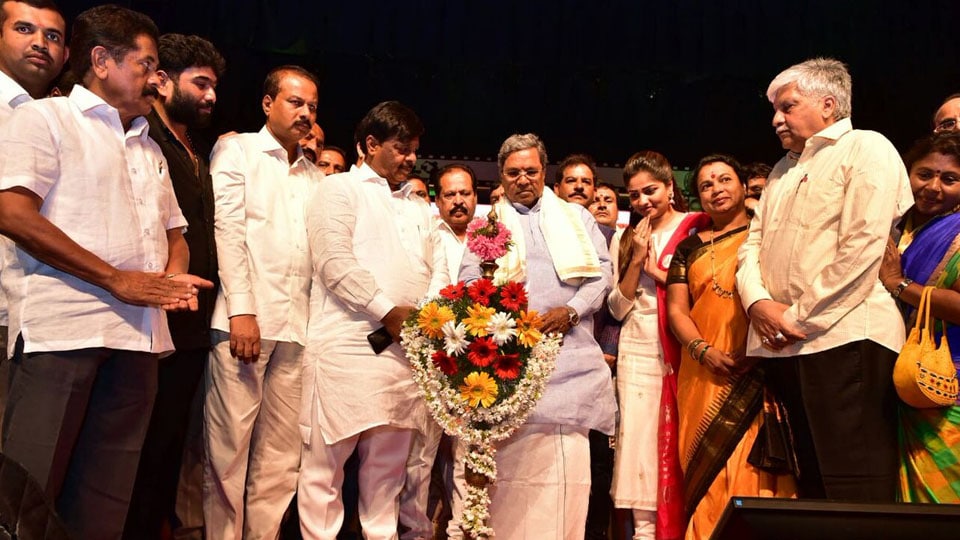 Mysuru: It seemed as the stars had descended at theKalamandira for the inauguration of Dasara Film Festival, here this morning. The main attraction of the show was none other than the ‘Dimple Girl’ Rachitha Ram of Chakravyuha fame.

As Rachitha along with other guests came on to the stage, the audience present at the venue jumped in joy while some resorted to blowing whistles to express their happiness. Also present at the inauguration was Minister Umashree, a veteran star herself. However, Chief Minister Siddharamaiah formally inaugurated the Dasara Film Festival by lighting the lamp.

He later dedicated the newly-constructed Mini Theatre to the public and also inaugurated the painting expo and workshops jointly organised by Dasara Fine Arts Sub-Committee and Karnataka Lalithakala Academy.

Later, a three minute trailers of movies featuring in the Dasara Film Festival were screened. This apart, the Committee has decided to provide free entry for wards of mahouts and kavadis to film theatres screening movies during film festival.

The Committee will be screening a total of 70 movies at various venues which includes 18 foreign movies, 21 other language movies and 31 Kannada movies. Soon after the inaugural ceremony, Kannada movie ‘Ondu Motteya Kathe’ was screened at the venue.