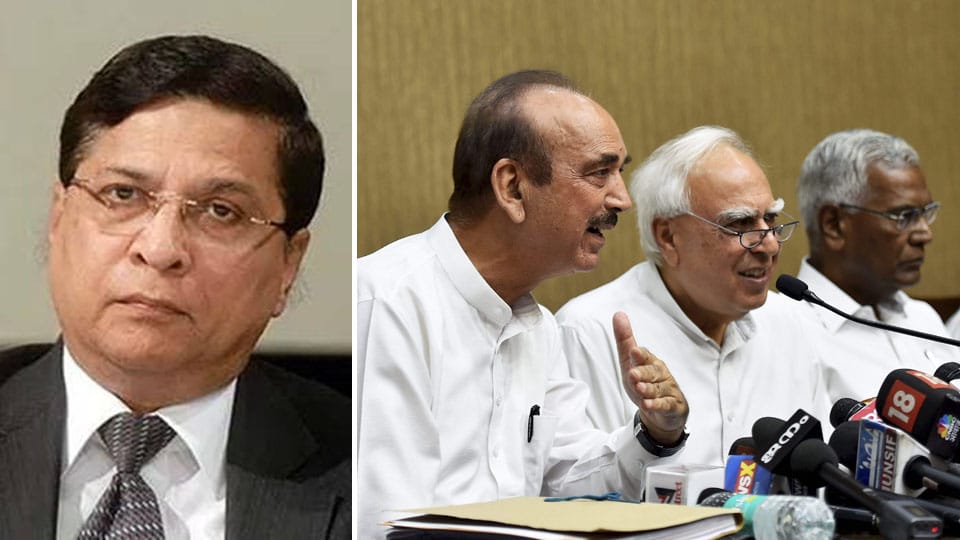 Finality of SC verdicts under threat!

The 64 MPs, by signing the motion to impeach the Chief Justice of India (CJI) are helping Congress party, who gave us Emergency, another chance to chip away at our Democracy. And the opposition is firing from the shoulders of the four Senior Judges of the Supreme Court, who had called a press conference to air their dissent against CJI Dipak Misra.

We bet these four Judges did not imagine politicians would hijack their dissent for political gain.

In fact, just three weeks after that press conference, Sitaram Yechury of  CPI(M) initiated a move among opposition members to impeach the Chief Justice based on the claims made by the four disgruntled Judges. But sadly for him the Congress has hijacked his political game plan.

Funnily, the Judge who said our “Democracy was in danger” because the CJI was sending cases to whomsoever he wanted, which by the way is his right as a CJI, now says, “CJI’s impeachment is not a solution and it is the system which needs to be made transparent.”

The four Supreme Court Judges by calling a press conference on January 12 lit the spark and now politicians are warming themselves around the fire with the hope that they will rule the house one day. Unfortunately, they’ve lit the fire inside the house, just like they did in 1975.

Many may remember Justice Chelameswar, during the press conference of the ‘disgruntled’ said, “I don’t want another 20 years later some very wise men in this country blame that Chelameswar, Ranjan Gogoi, Madan Lokur and Kurian Joseph sold their souls. They didn’t take care of this institution, they didn’t take care of the interest of this nation.” Well dear Judges, by calling the press conference and encouraging politicians to get involved with the internal matters of the Supreme Court, you have done just that. History will judge you for weakening the Indian Judiciary.

Now, where was the opposition all these days? Did they realise that the CJI was not suited for his job only now? Just after Justice Loya’s case got thrown out? Also, it has been reported that the allegations against the CJI are not even impeachment worthy and won’t go through. And how can it?

The motion if admitted has to be cleared by a three-member committee, which then must be passed with a 2/3rd majority in each house where the opposition has no numbers. And by the time all this happens CJI Misra will be long gone as he retires in six months.

Also what will be interesting to see is if the Vice- President M. Venkaiah Naidu refuses to admit the petition to impeach the CJI then the opposition will have to go to the Supreme Court to act against the Vice-President ! Yes, they have to get permission to impeach the Chief Justice from the Chief Justice himself !?  This would pit Judge against Judge. What is the opposition trying to achieve?

This reckless move by the opposition reeks of desperation. All we can assume is that they are doing this in preparation for Ayodhya verdict.

It was reported that Congress leader and senior advocate Kapil Sibal, who is leading the impeachment brigade, had urged the CJI to put off the hearing of Ram Janmabhoomi-Babri Masjid case till 2019 Lok Sabha polls citing “huge political ramifications” but CJI Misra did not oblige.

So, is Congress preparing for the Ayodhya verdict? In case it goes in favour of a temple, at least Muslims will be grateful to them for trying to kick out a “partial” Judge according to them?

By casting aspersions on the CJI, the Congress and other Opposition parties have snatched away the all-important finality of a Supreme Court verdict. Are we now to believe that Supreme Court verdict is not the final word and that if you are not happy with the verdict you can impeach the Judge and go back to the case till you get the verdict you want?

If these politicians and these former Judges really wanted to help the Judiciary, let them first debate the judicial reforms and repeal the numerous outdated British laws that we still follow. Let them cleanse the Judiciary at the lower courts which is affecting most Indians. And finally, let us make frivolous cases punishable.

For now, all that the opposition has done is that in the garb of “saving” the Judiciary they are trying to save their own political future. The grand-mother took our Democracy to the Emergency; the grandson wants to induce a cardiac arrest. That said, this reckless ambition of a young prince, who desperately wants to show his political mettle by using the Judiciary as an instrument of politics, has left an indelible mark in our history, the kind his grandmother left, the kind we wish to forget.

5 COMMENTS ON THIS POST To “Finality of SC verdicts under threat!”