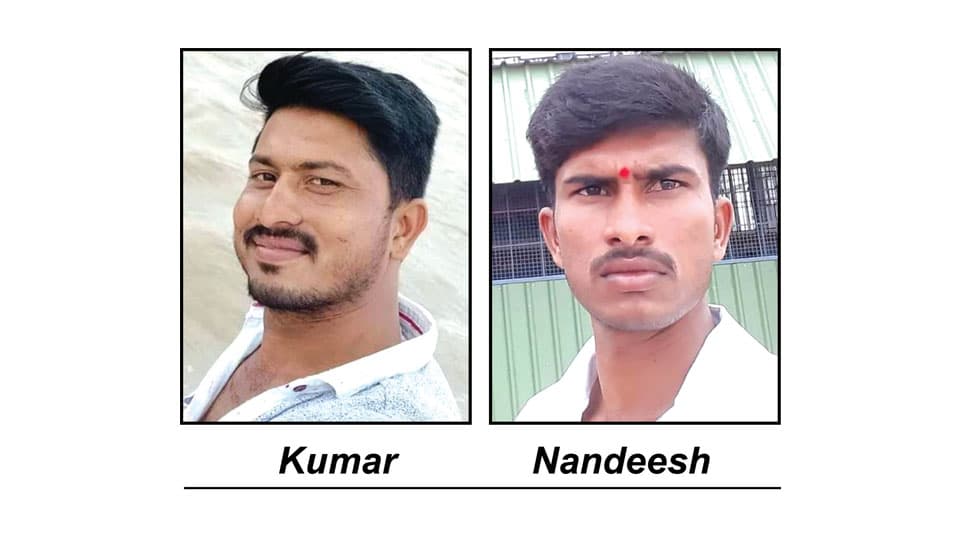 Mysore/Mysuru:  A gang of seven members has brutally assaulted two persons with machetes, daggers and other weapons at Hanchya village on the outskirts of city in broad daylight yesterday.

While those who were assaulted have been identified as 28-year-old Kumar and 26-year-old Nandeesh, who are brothers and residents of Hanchya village, the youth, who was caught by the villagers and handed over to Police is Nagendra of Rammanahalli. It is learnt that a gang of youths from the neighbouring village assaulted the brothers. Police force has been deployed at the village as a preventive measure.

Meanwhile, Mysuru South Rural Police Inspector Shashikumar, speaking to SOM this morning, said that one person, who was caught by the villagers, was handed over to the Police and added that CCTV footages and videos of the assault made by the public have been collected.

Both the CCTV footages and assault videos are being examined and all accused would be nabbed soon, the Inspector said.

Details: Yesterday at about 11.30 am, Kumar, who had his breakfast at a hotel in Kempegowda Circle, came out of the hotel only to be attacked by a gang of about seven members with lethal weapons. Kumar’s brother Nandeesh, who rushed to his brother’s help was also attacked and assaulted by the gang.

Villagers, who were shocked to see the youths of their village being assaulted, rushed to their help and the gang on seeing the villagers coming towards them fled from the spot. But the villagers gave a chase and managed to catch hold of one of them and handed him over to the Police. Kumar and Nandeesh, who suffered serious injuries, have been admitted to K.R. Hospital where they are said to be out of danger, according to Police.

It is learnt that Kumar had some financial disputes with a few youths from the neighbouring village and frequent fights used to take place between them. On Friday night too, a few youths from the neighbouring village had allegedly assaulted Kumar and the village leaders, who had intervened, had decided to solve the issue with talks. But Kumar had told them that he would lodge a complaint with the Police against those who had assaulted him.

Police sources said that the neighbouring village youths, numbering about seven, had come on three bikes in a bid to take revenge and were searching for Kumar on the outskirts of the village yesterday morning and assaulted him when he came out of the hotel. Sources also said that the youths may have targeted Kumar as he had warned of lodging a complaint against those who had assaulted him on Friday night.

Meanwhile, Police have suspected the involvement of outsiders in the assault of the brothers and said that the assault on them was purely over personal enmity.

SP R. Chetan, Additional SP Shivakumar, Rural Inspector Shashikumar and staff rushed to the spot and conducted an inspection, besides collecting information from the villagers. A case has been registered at Mysuru Rural Police Station.

As the assault video had gone viral on social media, Police, who have collected the videos and have launched a hunt to nab all the accused based on the video clippings.