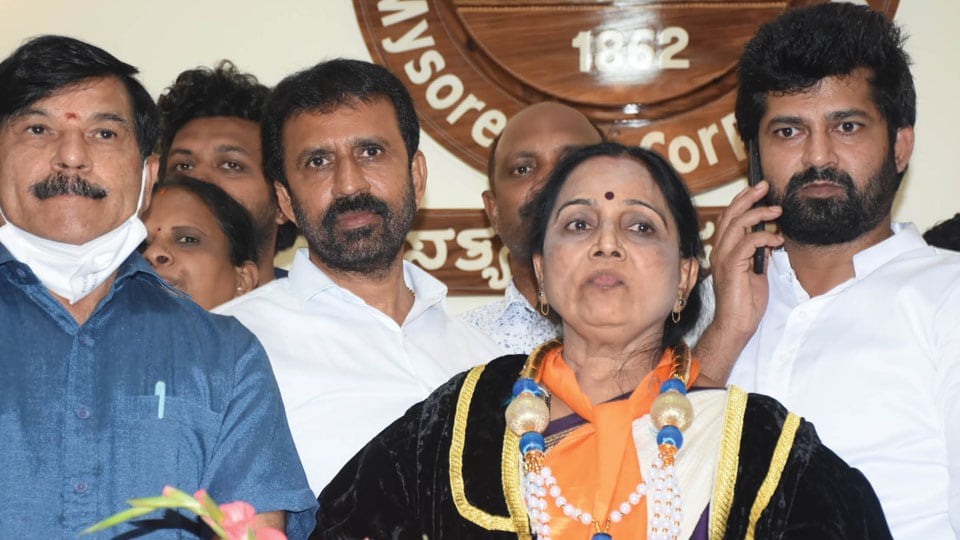 Mysore/Mysuru: In a dramatic turn of events minutes into the poll process for the election of the new city Mayor this noon, Sunanda Palanetra of the BJP was elected as the Mayor with Congress Corporators, led by NR MLA Tanveeer Sait walking out in protest against the stance of its alliance partner JD(S), which chose to stay neutral at the last minute and fielded its own candidate. With the election of Sunanda, the BJP has come to power in the Civic Body for the first time since the election to the Mysuru City Corporation (MCC) was first held in 1983.

Sunanda, who represents MCC Ward 59 (Kuvempunagar M-Block) and one of the most senior members of the Civic Body, becomes the 35th Mayor of the city. The Mayor post was reserved for General Category woman. The mid-term Mayoral poll was necessitated after Rukmini Madegowda of the JD(S) was disqualified as the Mayor subsequent to the Karnataka High Court annulling her election from Ward 36 on the grounds of inappropriate declaration of assets in May last.

The MCC has 65 Corporators and a current total electoral strength of 72 with MCC Ward 36 lying vacant.

The poll process started with the filing of nomination papers at 8 am, during which Sunanda Palanetra of the BJP, H.M. Shantakumari of the Congress (Ward 32 – Usmanianagar and Ghousianagar A-Block) and Ashwini Ananthu of the JD-S (Ward 37 – Raghavendranagar) filed their papers. Soon after the filing of nomination concluded at 10 am, the candidates were allowed to withdraw their papers.

With all the three candidates remaining in the fray, Mysuru Regional Commissioner Dr. G.C. Prakash, who was the Returning Officer, ordered for voting, which commenced at 12 noon.

Soon after the voting process began, the Congress Corporators, led by acting Mayor Anwar Baig and MLA Tanveer Sait, upset over the attitude of the party’s coalition partner JD(S), walked out in protest.

However, the voting continued and Sunanda Palanetra of the BJP, who secured 26 votes, was declared elected as the new Mayor, with H.M. Shantakumari of the Congress and Ashwini Ananthu of the JD(S), both bagging 22 votes each.

In a counter to the Congress Corporators, the BJP members too raised slogans against the Congress, accusing it of making backdoor attempts to come to power though falling well short of the numbers.

The BJP has 22 Corporators, 2 MLAs, a Lok Sabha MP (Pratap Simha) and an independent Corporator (M.V. Ramprasad), which accounted for the 26 votes that Sunanda secured.

Only 70 out of the 72 electors took part in the polls with Chamundeshwari MLA G.T. Devegowda and MLC Sandesh Nagaraj, who both were elected on a JD(S) ticket, abstaining from the poll. While GTD reportedly stayed at the Government  Guest House in Nazarbad along with District Minister S.T. Somashekar, who arrived in the city this morning, the whereabouts of MLC Sandesh Nagaraj was not immediately known.

With now party having a majority on its own, the election was keenly watched by political observers . The BJP is said to have got a boost with the efforts of District Minister Somashekar, party MLAs S.A.Ramdas and L.Nagendra and MP Pratap Simha, who are learnt to have held a number of parleys with the JD(S) in order to get the Mayor’s post, which had eluded the party for 38 long years, though the BJP is ruling  the State and the country.

Sunanda Palanetra was all smiles today after her victory, which erased her disappointment in the last Mayoral poll held on Feb.24, when she had walked out of the MCC Council Hall in tears after losing to Rukmini Madegowda of the JD(S).

However, her term is cut short to six months as the next Mayoral poll for the fourth term of the current tenure of MCC is scheduled for February 2022.

After the voting process concluded, the Returning Officer officially announced the election of BJP’s Sunanda Palanetra as the new City Mayor and said that her term will be from Aug.25, 2021 to Feb.23, 2022.

Soon after the official announcement, Sunanda Palanetra was greeted by Chief Minister Basavaraj Bommai over phone.

Meanwhile, the fate of Anwar Baig of the Congress, who was elected the Deputy Mayor on Feb.24 and functioned as Acting Mayor following the disqualification of Rukmini Madegowda,  is not immediately known, as what strategy the BJP  and JD(S) will adopt is yet to be seen.