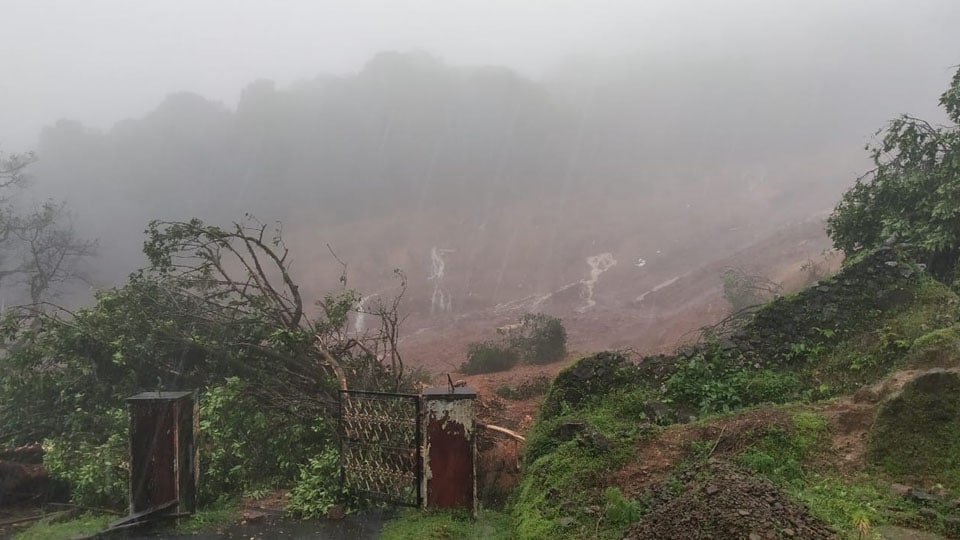 Five missing in midnight landslide at Talacauvery in Kodagu

Madikeri: In a major midnight landslide at the holy place of Talacauvery in Kodagu District, five persons including the Chief Priest of Sri Cauvery Temple are missing. Due to incessant rains, a portion of the Brahmagiri Hill collapsed on two houses where the priests lived.

The houses of the priests were located near the entrance arch of the Temple at the foot of Brahmagiri Mountain Range. While Narayanachar held charge of the Temple since decades, Ravikiran Bhat and Pavan Bhat had joined the puja rituals under his guidance only two months back.

Mud came crashing on two houses at around midnight and the mountain range that collapsed is around 30 acres. Over five landslides have occurred in the area last midnight and mud has slid to Cherangala and Kolikadu village that is 6 kilometres from Talacauvery.

The landslide came to light early this morning as the Chief Priest Narayanachar did not come to his regular puja duties. One of the Temple security guards went to check the priest only to find his house buried in mud. He immediately alerted the District Authorities. Two days back, the local Panchayat Development Officer had issued a notice to Narayanachar asking him to move out of the place as staying at the foot of the hill was dangerous. But the priest refused to move out, the Panchayat officials said.

The two houses of the priests had a cowshed that had over 20 bovines and mounds of mud and rubble have covered the shed too. Though there was an asphalted road connecting the temple and the priests’ houses, now due to landslip, the area has become inaccessible.

Teams from National Disaster Response Force and Advanced Rescue Team have reached Talacauvery and they have to access the landslide spot by walk. The rescue teams have to dig out the rubble by hand as machinery or earth movers cannot reach the spot as it is a hilly terrain and already, over 30 acres of land has slipped.

As per preliminary reports, of the two houses, one house is vacant as the priest has shifted from there to Bhagamandala. Narayanachar and his wife, her brother and two other priests continued to stay in Talacauvery. Heavy rain and thick fog are hampering the rescue mission.

The Geological Survey of India (GSI), a Government of India body, had predicted that there will be landslides in Talacauvery (near the Temple) as surface cracks were observed during the team’s inspection last year. The GSI team that conducted extensive field study and research following the devastating landslides in Kodagu in 2018 had published in its report that slope modification without proper precautions is the main reason for landslides.

In its final report, Geologists Sunandan Basu and Kapil Singh had said that Talacauvery Temple and Korangala areas fall under moderate to highly susceptibility class when it comes to landslides. Here, unbridled construction of houses by carving hill slope has resulted in land destabilisation.

The team had visited the areas on Aug. 17 and 18 last year and were accompanied by State Government officials. At Talacauvery, unsupported slope cut for road widening has destabilised the entire slope and future landslides cannot be ruled out, the team observed.

“There are multiple contour trenches made by Department of Forest at the mid slope for conservation of water and prevention of soil erosion. These trenches are aligned parallel to the crack and situated near the upslope of the cracks. It cannot be ruled out that the trenches with standing water may have allowed infiltration into the deep soil. Slope cut for road expansion and the cut slope is left unsupported,” the report stated on the geo-scientific causes of surface cracks at Talacauvery Brahmagiri Ranges.

Seeing the cracks, the GSI team had suggested that the cracks must be filled with impervious material to reduce chances of water infiltration into deep mud increasing the chances of landslides. These filled cracks must be monitored regularly, the team had reported. Though the Geologists had suggested certain remedial measures like slope grading, construction of retaining wall with weep holes and plantation on the slope, nothing was done.

Kodagu on the edge as incessant rain pounds