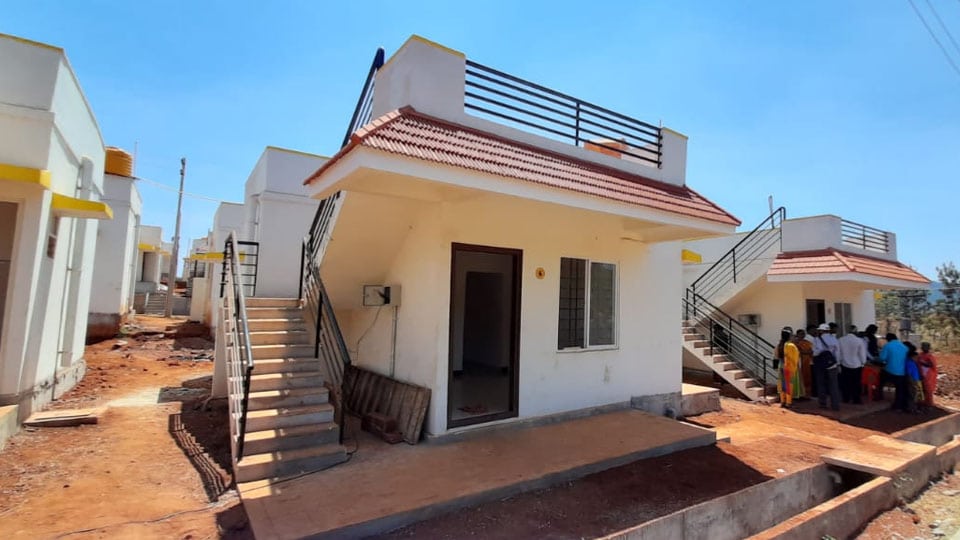 Mysore/Mysuru: This monsoon, the 2018 flood and landslide victims of Kodagu whose houses were washed away leaving hundreds of them homeless were hoping to start a new life as the title deeds and keys of about 463 new houses constructed by the State Government at Jamboor and Madenadu are scheduled to be handed over to them. But their hopes too are likely to be washed away as there are umpteen construction defects, threatening the very safety of occupants this monsoon.

Holes are gaping in the house foundations, giant roots of the trees that existed earlier are protruding from the foundations, uneven and hollow walls, bent doors and windows, cracked bases are some of the characteristics of many houses and shockingly some of the houses have slant walls and RCC sloppy roofs. Though the walls have been freshly painted to look strong and sturdy, its insides are full of mud. Contractors have used maximum mud along with bricks and very less cement.

These houses will be handed over to the flood victims on May 29 by Chief Minister B.S. Yediyurappa and a gala event is being organised at Jamboor near Madapura for this. But local villagers and the flood victims who have personally seen and experienced the rain and landslide havoc unleashed by nature in 2018 and 2019 say that many of the houses will not withstand the nature’s fury if it rains this year like the last two years.

District Minister to be apprised

The construction faults were highlighted by “Namma Kodagu” team and according to its President Naushad, the issue has been brought to the notice of Kodagu Deputy Commissioner Annies Kanmani Joy and Kodagu District Minister V. Somanna is likely to visit the houses tomorrow to oversee preparations for the May 29 event. “We will draw the attention of the Minister and will appeal him to set right the defects as lives are at stake. If the repair works are not initiated, we will boycott the CM’s event and  refuse to take possession of the houses,” said B.K. Gandhi, President of Jamboor Santhrasthara Sangha.

The Rajiv Gandhi Housing Corporation Limited constructed the houses on the sites developed on Government land and each house has been constructed at a cost of Rs. 9.85 lakh. Each house is built on 30X40 sq. ft dimension and has two bedrooms, a hall and a kitchen. This is the first major allotment of identical-looking houses in a row to the victims of floods and landslips since the tragedy struck them two years ago. Over 35 houses have already been handed over to the victims at Karnangeri near Madikeri in June last year.

Over 840 people lost their homes in the 2018 fury and for them, the then H.D. Kumaraswamy Government initiated the house construction project. Houses are ready for 463 victims at Jamboor (383) and Madenadu (80). Of them, keys and title deeds will be handed over by Yediyurappa on May 29 to 463 families and of them 80 families can move to Madenadu houses immediately. In Jamboor, 140 families can move in immediately with 243 houses pending with some minor works like plumbing and electricity.

As 35 houses have already been built and handed over at Karnangeri, still, 342 houses are pending and of this, 200 houses are being built by the Infosys Foundation and the rest of the 142 houses will have to be built by the Government in the second phase of the project.

There are good houses too

Villagers and flood victims say that when the project was launched there were many VVIP visits and as a result, the construction quality was good. Subsequently, the quality deteriorated with lack of supervision and monitoring. Former Kodagu Deputy Commissioner P.I. Sreevidya had pointed out several loopholes in the construction but she was unceremoniously transferred, said members of Namma Kodagu team.

Will it withstand rains?

“They took two years to build houses and most of the houses have been constructed in a shoddy manner. We do not want such houses and we have waited for two long years and we are ready to wait for some more time. Let the repairs be done and then we can occupy the house,” Gandhi said.

P.A. Thangamma, who lost her husband and her house in the nature’s fury said, “I have seen the floods and landslides in close quarters and I am sure these houses will not withstand heavy rains,” she said.

Narrating the plight of the flood victims, she said that after the floods destroyed over 1,000 houses, the Government promised Rs. 10,000 rent for them to stay in other accommodations. “But the promised rent was paid only for 6 months and later when we asked the District officers, they callously told us that the Government has no money,” she said.